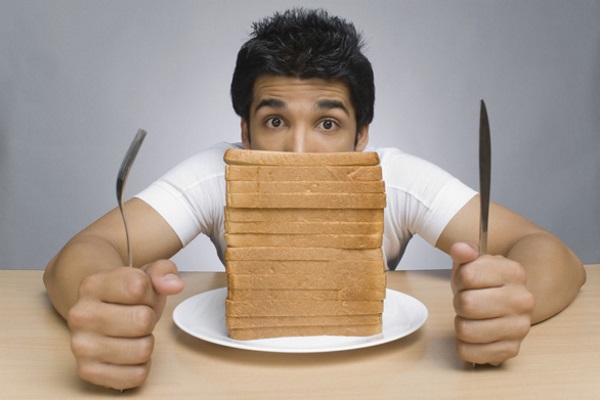 Bloating is when your belly feels swollen or enlarged after eating.

It is usually caused by gas or other digestive issues (1).

Although bloating may be a symptom of a serious medical condition, it is usually caused by something in the diet (4).

Here are 13 foods that can cause bloating, along with suggestions on what to eat instead.

1. Beans
Beans are a type of legume.

They contain high amounts of protein and healthy carbs. Beans are also very rich in fiber, as well as several vitamins and minerals (5).

However, most beans contain sugars called alpha-galactosides, which belong to a group of carbs called FODMAPs.

FODMAPs (fermentable oligo-, di-, mono-saccharides and polyols) are short-chain carbohydrates that escape digestion and are then fermented by gut bacteria in the colon. Gas is a byproduct of this process.

For healthy people, FODMAPs simply provide fuel for the beneficial digestive bacteria and should not cause any problems.

However, for individuals with irritable bowel syndrome, another type of gas is formed during the fermentation process. This may cause major discomfort, with symptoms like bloating, flatulence, cramping and diarrhea (6).

Soaking and sprouting the beans is a good way to reduce the FODMAPs in beans. Changing the soaking water several times can also help (7).

What to eat instead: Some beans are easier on the digestive system. Pinto beans and black beans may be more digestible, especially after soaking.

You can also replace beans with grains, meat or quinoa.

2. Lentils
Lentils are also legumes. They contain high amounts of protein, fiber and healthy carbs, as well as minerals such as iron, copper and manganese.

Because of their high fiber content, they can cause bloating in sensitive individuals. This is especially true for people who are not used to eating a lot of fiber.

Like beans, lentils also contain FODMAPs. These sugars may contribute to excessive gas production and bloating.

However, soaking or spouting the lentils before you eat them can make them much easier on the digestive system.

What to eat instead: Light colored lentils are generally lower in fiber than darker ones, and may therefore cause less bloating.

3. Carbonated Drinks
Carbonated drinks are another very common cause of bloating.

These drinks contain high amounts of carbon dioxide, a gas.

When you drink one of these beverages, you end up swallowing large amounts of this gas.

Some of the gas gets trapped in the digestive system, which can cause uncomfortable bloating and even cramping.

What to drink instead: Plain water is always best. Other healthy alternatives include coffee, tea and fruit-flavored still water.

4. Wheat
Wheat has been highly controversial in the past few years, mainly because it contains a protein called gluten.

Despite the controversy, wheat is still very widely consumed. It is an ingredient in most breads, pastas, tortillas and pizzas, as well as baked goods like cakes, biscuits, pancakes and waffles.

Wheat is also a major source of FODMAPs, which can cause digestive problems in many people (10, 11).

What to eat instead: There are many gluten-free alternatives to wheat, such as pure oats, quinoa, buckwheat, almond flour and coconut flour.

There are several alternatives to conventional wheat bread in this article.

However, they also contain FODMAPs, so they may cause bloating in some people (12).

Cooking cruciferous vegetables may make them easier to digest.

What to eat instead: There are many possible alternatives, including spinach, cucumbers, lettuce, sweet potatoes and zucchini.

6. Onions
Onions are underground bulb vegetables with a unique, powerful taste. They are rarely eaten whole, but are popular in cooked meals, side dishes and salads.

Even though they’re usually eaten in small quantities, onions are one of the main dietary sources of fructans. These are soluble fibers that can cause bloating (13, 14).

Additionally, some people are sensitive or intolerant to other compounds in onions, especially raw onions (15).

Therefore, onions are a known cause of bloating and other digestive discomforts. Cooking the onions may reduce these digestive effects.

What to eat instead: Try using fresh herbs or spices as an alternative to onions.

It is very nutritious, since it is rich in fiber and contains high amounts of vitamins and minerals like molybdenum, manganese and selenium.

Because of its high fiber content, whole grain barley may cause bloating in individuals who are not used to eating a lot of fiber.

Furthermore, barley contains gluten. This may cause problems for people who are intolerant to gluten.

What to eat instead: Refined barley, like pearl or scotch barley, may be tolerated better. Barley can also be replaced with other grains or pseudocereals like oats, brown rice, quinoa or buckwheat.

8. Rye
Rye is a cereal grain that is related to wheat.

It is very nutritious and an excellent source of fiber, manganese, phosphorus, copper and B-vitamins.

However, rye also contains gluten, a protein that many people are sensitive or intolerant to.

Because of its high fiber and gluten content, rye may be a major cause of bloating in sensitive individuals.

What to eat instead: Other grains or pseudocereals, including oats, brown rice, buckwheat or quinoa.

9. Dairy Products
Dairy is highly nutritious, as well as an excellent source of protein and calcium.

There are many dairy products available, including milk, cheese, cream cheese, yogurt and butter.

However, about 75% of the world’s population can’t break down lactose, the sugar found in milk. This condition is known as lactose intolerance (16, 17).

What to eat instead: People who are lactose intolerant can sometimes handle cream and butter, or fermented dairy like yogurt (18).

10. Apples
Apples are among the most popular fruits in the world.

They are high in fiber, vitamin C and antioxidants, and have been linked with a range of health benefits (19, 20).

However, apples have also been known to cause bloating and other digestive issues for some people.

The culprits are fructose (which is a FODMAP) and the high fiber content. Fructose and fiber can both be fermented in the large intestine, and may cause gas and bloating.

Cooked apples may be easier to digest than fresh ones.

What to eat instead: Other fruits, such as bananas, blueberries, grapefruit, mandarins, oranges or strawberries.

11. Garlic
Garlic is incredibly popular, both for flavoring and as a health remedy.

Like onions, garlic contains fructans, which are FODMAPs that can cause bloating (21).

Allergy or intolerance to other compounds found in garlic is also fairly common, with symptoms such as bloating, belching and gas (22).

However, cooking the garlic may reduce these effects.

What to eat instead: Try using other herbs and spices in your cooking, such as thyme, parsley, chives or basil.

Sugar alcohols are also FODMAPs. They tend to cause digestive problems, since they reach the large intestine unchanged where the gut bacteria feed on them.

Consuming high amounts of sugar alcohols may cause digestive issues, such as bloating, gas and diarrhea.

What to eat instead: Erythritol is also a sugar alcohol, but it is easier on digestion than the ones mentioned above. Stevia is also a healthy alternative to sugar and sugar alcohols.

13. Beer
Everyone has probably heard the term “beer belly” used before.

It refers not only to increased belly fat, but also to the bloating caused by drinking beer.

Beer is a carbonated beverage made from sources of fermentable carbs like barley, maize, wheat and rice, along with some yeast and water.

What to drink instead: Water is always the best beverage, but if you are looking for alcoholic alternatives then red wine, white wine or spirits may cause less bloating.

Other Ways to Reduce Bloating
Bloating is a very common problem, but can often be resolved with relatively simple changes.

There are several strategies that can help reduce bloating, outlined in this article.

If you have persistent digestive problems, then you may want to consider a low-FODMAP diet. It can be incredibly effective, not just for bloating but for other digestive issues as well.

However, make sure to also see a doctor to rule out a potentially serious medical condition.

Take Home Message
If you have problems with bloating, then chances are that a food on this list is the culprit.

That being said, there is no reason to avoid all of these foods, only the ones that cause you problems personally.

If you find that a certain food consistently makes you bloated, then simply avoid it. No food is worth suffering for.