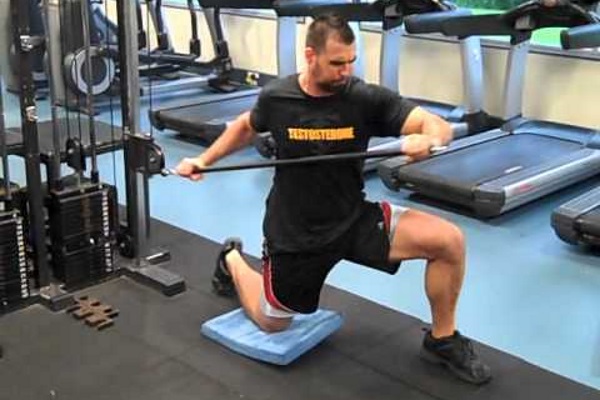 I’m collaborating with Cressey Sports Performance coach Tim Geromini on today’s post, as we both reviewed Dean Somerset’s new resource, Advanced Core Training, over the weekend. Today, we’ll highlight some of the biggest takeaways from the product – and how it relates to what we do at CSP on a daily basis.

Let me preface this article by saying that I think the world needs another “core training” product, seminar, or article like I need a hole in my head. Seriously, it’s the most hackneyed topic in the fitness industry today. However, Dean is a super bright guy and his stuff never disappoints, so Tim and I gave him the benefit of the doubt, especially since the resource clocks in at a hair over four hours and therefore wouldn’t destroy an entire day if it was less-than-stellar.

Fortunately, Dean put on a great show. Check out some key takeaways we wanted to highlight:

1. Training your core isn’t just about being stiff and stable: Core training is also about being elastic and malleable. We have to be able to get into positions and then lock down into them to prevent injury. However, we also have to be resilient enough to move through the continuum while being able to control movements. Freedom of the movement you have available is key.

2. The end of pain usually does not mean you have restored structure and function. More often than not, the end of pain just means you aren’t currently irritating those tissues enough to have pain. How many times have your client’s symptoms gone away and came back shortly after? Although the symptoms and pain may be gone, the injury is still there. Progressing exercises too fast can lead to a return in pain.

There is nothing wrong with owning basic exercises for long periods of time.

3. Your diaphragm is the roof and main anchor point for most core muscles: psoas, rectus, multifidus, and transverse abdominis. They also attach to the pelvic floor. When you can control breathing through your diaphragm, you can put yourself in a better position to express core strength.

4. Rotary stability exercises are incredibly important, but they usually occur with the lower body fixed and upper body creating the destabilizing torques. Chops and lifts are perfect examples.

However, in functional activities like the rotation that occurs with golf, tennis, baseball, track and field throwing, and hockey slapshots, there is a separation that takes place between the torso and hips. Effectively, they rotate in opposite directions – so it makes sense to have both “ends” of the chain moving in some of our exercises. A good example is the Dead Bug Anti-Rotation Press, which also offers some anterior core benefits.

5. If you’re always doing relaxed parasympathetic breathing, you won’t generate power. Likewise, if you’re always doing short and choppy breathing, you’ll never relax and will fatigue faster. Let’s take the squat, for example: if your breathing is slow and parasympathetic, your body is not primed to express the absolute force it can. On the other hand, if you’re performing a deadbug as part of your warm-up, you need to relax to activate your core.

6. Try programming for breaths instead of time. During a plank, instead of asking your client to hold the position for 30 seconds, try having them hold the plank for 5 full breaths. This forces them to actually breathe since their focus is getting 5 full breaths out as opposed to trying to survive for 30 seconds. It’s an instant shift to quality over quantity.

7. Neutral, Brace, Breathe: when you’re changing positions or setting up for an exercise, the best way to put yourself in the correct position is to own your starting point. In order to do that, you need to reset to a neutral spine, brace your core, and breathe.

8. We really like quadruped walkouts as a “bridge” exercise that can be used as a progression from all fours belly lift toward bear crawls.

This awesome drill gets you not only an anterior core challenge, but also a means of building good serratus anterior function. You can’t have good upper extremity function without quality core control!

9. Think set-up, execution, and recovery: to piggy back on the previous point, let’s take the deadlift as an example here. You wouldn’t perform repetition after repetition in rapid fire without resetting. Before going on to your next rep, you reset to a neutral spine, brace your core, and breathe. Instead of thinking of one set of five reps, think of performing five singles. Each repetition is a set in itself.

10. Producing force from lower body to upper body is core dependent. Here at CSP we talk a lot with our athletes about the importance of their core in their pitching delivery. You may have a strong lower half, but without a stable and strong core, that force from your lower body can’t be expressed all the way up the chain if your core gives out.

Advanced Core Training is on sale for $40 off the normal price for this week as an introductory discount. It covers the gambit of core training: everything from how to tune breathing patterns to the desired goal outcome (mobility, strength, reactive speed, etc) to assessing core function. There is a huge hands-on component, which provides a lot of different ideas on how to use exercises and – more importantly – when to use them.To sweeten the deal, Dean’s locked down NSCA CEUs for it. In short, I think it’s a great resource that has merit for fitness professionals, strength and conditioning coaches, rehab specialists, and fitness enthusiasts alike. Click here to learn more.