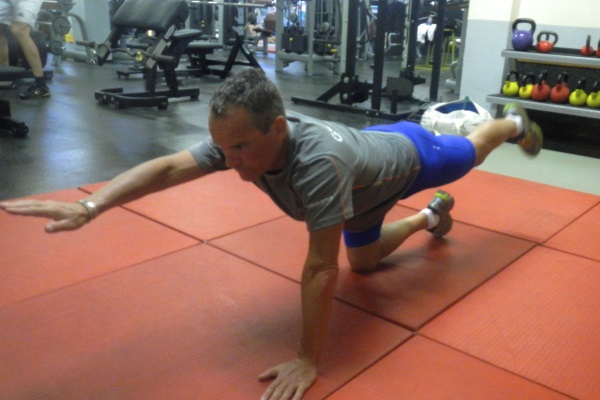 The days of using Sit-Ups and Crunches to increase core strength are long gone. Planks and stability exercises have come into favor, thanks to their ability to strengthen the core without hurting the lower back.

Now you can add another reason why you should never do a Sit-Up or Crunch.

Twelve individuals with limited training experience and 12 highly trained Muay Thai fighters performed either an isometric core program, a dynamic core program or no core program at all. Core stiffness—meaning the trunk’s ability to resist movement—was assessed before and after the workouts, and upon completion of the study after six weeks.

The researchers found the isometric program superior to the dynamic program across the board. It more effectively increased core stiffness immediately after the core workout and over the entire six-week program.

The reason why isometric exercises promote greater core muscle strength gains it that the muscles are engaged for a longer amount of time than they are with dynamic moves—adhering to and confirming the principle of time under tension. Dynamic exercises may be physically challenging because they typically involve greater movement, but that does not guarantee they are safe or effective.

What This Means for You
We are at a tipping point when it comes to core training. Most modern training programs include isometric exercises, but dynamic exercises still creep in. The thought is athletes play sports dynamically, so they should train with dynamic core exercises to increase strength and power in athletic moves.

However, McGill and Lee proved that isometric exercise enhances speed and power production. McGill explains that greater core stability and stiffness increase limb athleticism. For example, if you have poor core stiffness and push your arm in front of you, your rib cage will bend toward your arm, creating an energy leak. If you have excellent core stiffness, 100 percent of your muscular force will contribute to a fast and powerful push.

“Locking down the core makes all the effects of the muscles across the shoulders and hips go to the limb side, which is what creates beautiful athleticism,” says McGill. “That’s a nice analogy to show how core stiffness releases power and speed to your limbs.”

In addition, greater core stiffness protects the spine from buckling and creates a natural armor around the body, increasing durability for your sport.

You can still perform rotational moves like Med Ball Rotational Throws, but with different technique than you may have used in the past. Rather than rotating through your core to produce power, your legs and hips should produce the majority of the force needed to throw the ball. Keeping your core stiff in this movement, while rotating your hips, improves the power transfer from the lower to upper body, resulting in a more powerful and safer exercise.

The study also makes a case for performing a core routine during your warm-up, as this is shown to improve performance by increasing core stiffness.

To get started with isometric core training, McGill recommends performing what he calls the Big 3—the Plank, Side Plank and Bird Dog. However, there are many variations of isometric core exercises you can perform. Some of the moves used in the study include:

How you integrate these exercises into your program depends on your goals and ability. But remember, it’s important to train your entire core, not just your abs. This is achieved by performing a variety of core exercises and trying to progress to more advanced exercises to challenge your muscles.