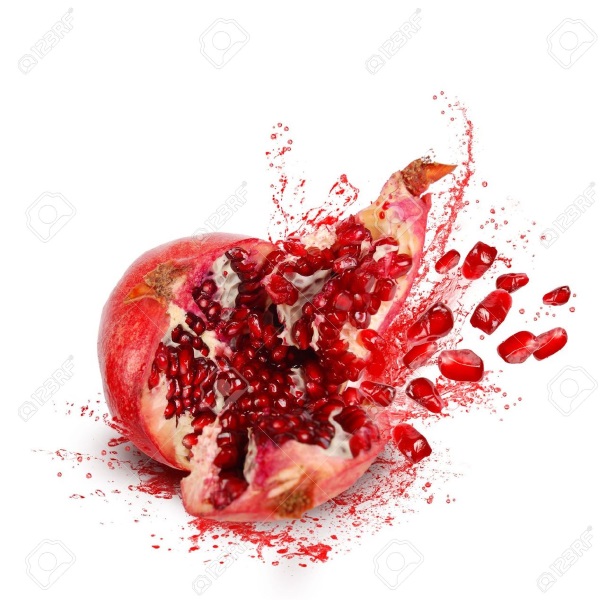 Sildenafil, the active ingredient in the erection enhancer Viagra, is more effective when combined with pomegranate. But sometimes the combination works a little too well, say doctors at the Sri Gokulam Hospitals and Research Institute in Tamil Nadu, India. They describe in Urology Annals cases of three men for whom the combination of Viagra and pomegranate led to an almost permanent erection.

Pomegranate
Pomegranates contain protective substances, a couple of which are shown below. Recent studies have shown that these compounds can help men to have harder erections. [Int J Impot Res. 2007 Nov-Dec; 19(6):564-7.] No supplements are necessary – a glass of juice daily is enough. Animal studies have also shown that pomegranate juice enhances the production of sperm cells and testosterone levels. That’s why herbalists tell men with sexual problems to include pomegranate in their diet.

Cases
This is what the three men [aged 46, 35 and 27] in the Urology Annals publications had done.

The 46-year-old had taken 50 mg Viagra every other day, which gave him an erection that allowed him to have sex. His erection disappeared almost immediately after orgasm, so an herbalist had advised him to drink 200 ml pomegranate juice every day. As a result of the combination it took a quarter of an hour for his erection to disappear.

The 35- and 37-year-olds took 50 mg Viagra every now and then. They didn’t need it, but took it to increase the intensity of their orgasm. They had also heard about pomegranate juice from an herbalist, so decided to try it with Viagra.

The day came that all three men suffered a priapism. They had had sex, but after orgasm their erection didn’t subside. After walking around with an erection for five hours (the 46-year-old) or eight hours (the other men) they went to hospital.

That was the sensible thing to do, as a priapism can damage the erectile tissue chambers, causing permanent impotence. The doctors relieved the men of their painful condition by administering injections of adrenalin or the adrenalin-like terbutaline into the penis.

The doctors have two theories about the way in which Viagra and pomegranate have a mutually reinforcing effect on each other. One is that the bioactive ingredients in pomegranate juice block the enzymes CYP3A4 and CYP2C9. Another – and we’re more inclined to go with this one – is that the erection-enhancing effects of pomegranate and Viagra reinforce each other.

And what would happen if you combined pomegranate extract with Tribulus terrestris?