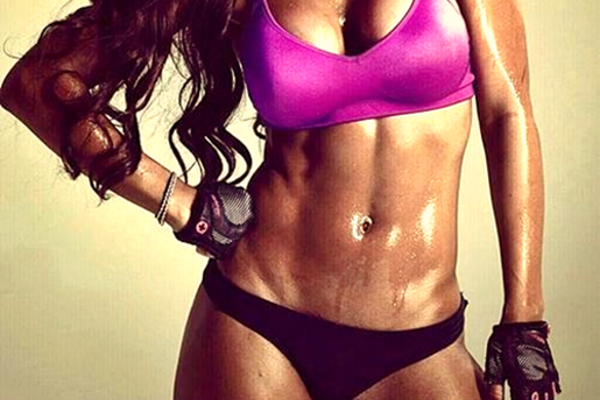 Since the natural melatonin production decreases as we age, it is (unfortunately) possible that younger women wouldn’t see the same benefits as the >56 year-old subjects of the study at hand.

No, I am not recommending laziness here, and I doubt that you will arrive at a cover model physique with nothing but a handful of melatonin pills, but the results of a recent study from the Aarhus University Hospital in Denmark are too intriguing not to devote a whole SuppVersity article to them.

In said study, Anne Kristine Amstrup and colleagues tested whether there’s anything to the rumors that have it that “melatonin [has] a positive effect on body weight and energy metabolism” (Amstrup. 2015). As the researchers rightly point out, previous “evidence for this relies mainly on animal models” (ibid). It was thus about time for someone to “determine the effects of melatonin on body composition, lipid and glucose metabolism in humans” (ibid).

In this case, said human beings were 81 post-menopausal Caucasian women (aged 56-73 years) diagnosed with osteopenia (T-score between -1 and -2.5 in the hip or spine). The Danish scientists randomized the women to receive

for a total time-period of 12 months. There were no dietary or exercise interventions, but all study subjects received a daily supplementation of 800mg calcium and 20ug vitamin D3 (which obviously wouldn’t affect the results, also because all of the participants had taken Ca + D3 for at least 3 months before the study began). With DXA, …

Beware! If you take melatonin anytime but 1-2h before bed (fasted), it may backfire! If you don’t remember why and how timing matters, I suggest you re-read my 2014 article about how taking melatonin at the wrong time of the day may actually make you fat and insulin resistant.
Each block consisted of eight individuals. In the blocks, the women were randomly allocated to treatment, i.e. four received placebo, while two received 1mg of melatonin and two received 3mg melatonin.

Figure 1: Changes in body composition (left) and adiponectin (right) in response to 1-3mg of melatonin taken at night over a 12-months period without further exercise or diet intervention (Amstrup. 2015).

This is also why I have little doubt that we can rely on the data in Figure 1 which shows an astonishingly pronounced reduction in fat mass and a borderline-significant increase in lean mass in the melatonin groups, when the subjects on the placebo supplements gained total (and %) body fat and lost lean mass in the same 12-months period.

You are an athlete who does not care about losing weight? Data from a Spanish study leaves no doubt that you can still benefit from taking melatonin. In their soon-to-be-published study, researchers from the Universidad de Granada a high dose of melatonin restored the normal circadian rhythm of melatonin production, reduced the nocturnal activity and the activity and position during lunch/nap time – “[t]ogether, these data reflect the beneficial effect of melatonin to modulate the circadian components of the sleep-wake cycle, improving sleep efficiency,” the authors say (Leonardo-Mendonça. 2015).

The one thing I would still like to repeat is what I already mentioned in the caption of the thumbnail to this article: Since the natural melatonin production decreases as we age and menopaus (Okatani. 2000), it is (unfortunately) possible that younger women wouldn’t see the same benefits as the >56 year-old subjects of the study at hand. 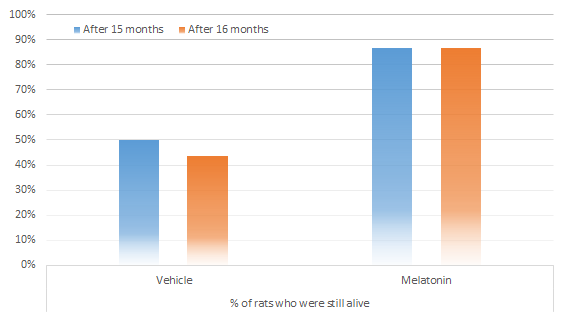 In a similar vein, it cannot be said with any certainty, whether men will benefit to the same extent as the post-menopausal women in the study at hand. While studies in rodents clearly suggest that melatonin works its weight reducing, life pro-longing (see Figure 2) in both male and female middle-aged rodents (Rasmussen. 1999; Wolden-Hanson. 2000), as well as rats who are fed an obesogenic diet like the standard American diet (Prunet-Marcassus. 2003), men are no little mice… but I guess you know that 😉

So what? Well, melatonin is a hormone, not one with that builds muscle, but as the study at hand proves one with non-debatable “beneficial effects on body composition in terms of reduced fat mass and borderline significantly increased lean mass in post-menopausal women”. What’s particularly interesting is that this effect can be achieved with relatively small doses of melatonin (1 and 3mg/d) and without any of the unwanted effects on blood lipids, glucose metabolism or markers of kidney and liver health you would see with other hormonal substances with proven body-recompositioning effects.

In this context it is also worth mentioning that the authors believe that their “findings may be explained by a melatonin-driven increase in osteogenesis resulting in decreased adipogenesis”. Bone instead of fat cells? Well, as SuppVersity reader and follower of the SuppVersity Facebook News-Channel you will have read about the cellular underpinnings of this transformation before. Against that background it is not unreasonable of Amstrup et al. to conclude that “[o]n the basis of [their] study, melatonin maybe an interesting therapeutic agent for future treatment strategies against […] age-related changes in body composition” (Amstrup. 2105). Whether it is a must have supplement for younger (more athletic) individuals, though, will have to be determined in future human trials, of which I doubt that they will be publicly funded