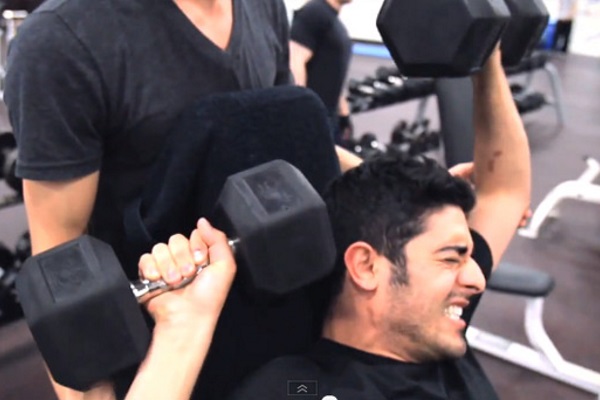 Taking every set in your workout to complete exhaustion might be a big mistake. Training to failure can build muscle and strength, but only if done right.

When I first started training, someone very smart told me that if I just stuck with the basics I’d be fine. Naturally, I ignored this information and struggled to see much progress. Eventually, my muscle building mistakes and lack of results frustrated me enough that I finally went back to my mentor, asked for his advice, and actually took his tips to heart and followed them to letter. Or so I thought.

I did the exercises, worked hard, but still didn’t quite see the changes I imagined. Some of this was due to impatience and unrealistic expectations. But part was due to a fundamental basic misunderstanding. I did not know how to build muscle. Heck, I didn’t know how to build a good workout. When I went to the gym, I still really didn’t understand how to lift weights.

Training to failure with maxim weights on every set will almost inevitably result in a breakdown of technique, drastically increasing the likelihood of injury.

You see, when I lifted weights I tried to take every set to failure. I attempted to push my muscles to the point that they could not lift the weight, never really understanding that this wasn’t how someone at my level should be training. And it really isn’t how to build muscle or how to become stronger.

As I became older and smarter, I finally began to learn how to train the right way and when to push to failure, and it made all the difference.

To help you understand how hard to push, I reached out to Jordan Syatt, owner of Syatt Fitness. Let his be your lesson on everything you need to know about training to failure. –Born

Training to Failure: The Final Word

Think back to the first time you ever lifted weights. What did you do?

You probably walked up to a dumbbell rack, picked up the heaviest weight you could hold, and performed some exercise movement–heck, any exercise movement–to the best of your ability. Rep after rep after rep. And you did so until you could no longer move the weight. Then you rested—probably until you felt fresh again—and repeated. Sometimes, a little naivety and simplicity is a good thing.

It’s the reason why “training to failure” is one of the most highly debated topics in the fitness industry and, truth be told, it’s extremely misunderstood.

I’ve spent enough time studying the topic to know that there’s no simple answer. Some people swear that taking every set to failure is the secret to success while others insist it’s a recipe for guaranteed injury and “overtraining.”

Is training to failure good or bad? Right or wrong? Will it help you achieve your goals or will it devastate your body and ruin your chances for success?

The answer – as most things in life – depends entirely on the individual as well as their needs, goals, and preferences.

Unfortunately, though, saying “it depends” doesn’t help to clarify the situation. You need to go to the gym and know what to do. So consider this your guide to know when—or if—training to failure should be incorporated into a training program.

The Tale of (Training to) Failure

While there are numerous types of muscular failure, the most commonly referenced type is known as Concentric Failure and it’s what most people are referring to when they talk about failure.

From a definition standpoint, concentric failure is:

“The point in a set where a full repetition cannot be completed during the concentric (positive, or muscle-shortening) phase of the rep without assistance from outside means (such as cheating or assistance from a training partner).”[1]

To use the bench press as an example, failure would be the point when—after lowering the bar—you are unable to press it back to the starting position. If you’ve ever read any of Adam’s work, you’d know that he had trouble with this scenario when he first started training and it almost caused him to be crushed.

Research comparing the differences between training to failure vs. not training to failure is, unfortunately, scarce. Furthermore, it’s unlikely that future research will tell us more than what strength coaches, bodybuilders, and other experienced fitness professionals have intuitively known for years.

That said, here’s what we know from a scientific standpoint:

Training to Failure Builds Muscle and Strength—If Not Done Repeatedly

Willardson et al. is perhaps the highest quality review of the literature pertaining to failure-based training. After examining the data, the authors concluded that training to failure is a valid method to use in order to enhance muscle hypertrophy, facilitate maximal strength gains, and break through plateaus.

However, it’s important to note that Willardson also stated “training to failure should not be performed repeatedly over long periods, due to the high potential for overtraining and overuse injuries. Therefore, the training status and the goals of the lifter should guide the decision-making process on this issue.”

Linnamo et al. found that training to failure resulted in a significantly greater increase in the secretion of growth hormone compared to non-failure based training. While this finding in no way, shape, or form proves that training to failure is better than other methods, it may lend credence to the success so many athletes, bodybuilders, and fitness enthusiasts have had with failure-based training.

There are other studies, but the findings are limited and hard to apply to the typical gym-goer. And that’s really what matters: How does this apply to you?

So let’s start there: You. After all, it’s your goals and training style that will play the biggest role in determining if and when you should push you body to failure. And that decision comes down to asking 5 questions.

Question 1: How Intense is Your Training?

Training intensity is perhaps the single most important factor in deciding whether or not training to failure is effective or even appropriate. Training intensity refers to the percentage of weight being lifted in relation to an individual’s 1-repetition maximum (1-RM).

In my opinion, training to failure at intensities at, or above 90 percent of your 1-RM should be avoided. Training to failure with such heavy weights will do very little (if anything) to enhance muscle hypertrophy and may actually hamper strength gains.

Furthermore, training to failure with near maximal weights will almost inevitably result in a breakdown of technique, drastically increasing the likelihood of injury.

Generally speaking, training to failure should be reserved for training percentages ranging from 50% to 85% 1-RM. While I rarely prescribe training to failure at either of these end-ranges, I believe that they are appropriate guidelines to follow for a majority of intermediate and advanced trainees.

Keep in mind, though, training to failure at 50% of your -RM can take an inordinate amount of time to complete and may not be well suited for those with time restrictions. On the other hand, 85% of your 1-RM is still heavy weight and the use of a spotter is strongly encouraged.

Question 2: What is Your Training Age?

There are three major categories signifying the current “level” of a given trainee. I call this “the trainee continuum” and they are: beginner, intermediate, and advanced.

An individual’s training status will determine what they need, and therefore someone who is a beginner might require unique methods of training that may substantially differ from someone who is at an intermediate or advanced stage.

For example, beginner trainees must, first and foremost, work on developing proper form and technique in compound movements such as the squat, bench press, deadlift, and chin-up. Consequently, training beginners to failure would likely do more harm than good as maintaining proper form becomes exceedingly difficult in a fatigued state.

On the other end of the spectrum, intermediate and advanced trainees usually understand what constitutes correct technique so their time would likely be better spent bringing up individual weaknesses through various methods of strength training.

Question 3: What is Your Goal?

An individual’s desired goal will dictate numerous components of their program, not least of which includes whether or not they should train to muscular failure.

Take, for example, the differences between powerlifters and bodybuilders. Powerlifter’s are focused on maximal strength development and consequently train at relatively high intensities of their 1-RM. Additionally, powerlifter’s place a distinct emphasis on full body, compound movements, which require a great deal of skill to maintain proper form.

Bodybuilders, on the other hand, are focused on improving muscle hypertrophy and, as a result, train at comparatively lower intensities of their 1-RM because strength is not always the answer. What’s more, bodybuilders tend to emphasize smaller, isolation movements designed to target individual body parts, which require less skill to maintain proper technique.

Because of these different approaches and the types of exercises performed, bodybuilders are able to train to failure more frequently than powerlifters. Not only is it safer for bodybuilders in that they are using less complicated movements at lower training intensities, but it’s, in all likelihood, a highly beneficial component of their training protocol.

It’s important to note, however, that many elite powerlifters also train to failure on a regular basis. In fact, as a world record powerlifter myself, I regularly utilize failure-based training within my programs. That being said, I rarely train to failure in big, compound movements and almost exclusively use intensities between 60% to 80% of my 1-RM.

Question #4: What is Your Mindset?

Failure occurs when an individual is unable to complete another full repetition. This tends to happen due to the onset of fatigue.

Fatigue, however, is a truly subjective term and is nearly impossible to quantify. Based on pain tolerance, willpower, and other psychological factors, what constitutes muscular failure for one individual may only be slight discomfort to someone else. As such, it’s difficult to know whether a given individual is training to true muscular failure or simply cutting the set short.

Furthermore, it’s important to note that while some individuals derive pleasure from training to failure, others do not and attempting to force them may, in fact, deter them from strength training. Understanding the psychology of your clients (or yourself) and how they respond to training is of the utmost importance to long-term program adherence.

Question #5: What Exercises Are You Performing?

Snatches, for example, are arguably the single-most complex lift and training them to failure is dangerous. Simpler multi-joint movements, such as variations of the chin-up, bench press, and lunge, are suitable for failure-based training but should be performed with extreme caution. Same can be said for exercises like squats.

Finally, single-joint exercises, including bicep curls, triceps extensions, and calf raises, are the least complex of movements and are far more appropriate to train to failure.

While it’d be easy to make a blanket statement about training to failure, ultimately it depends on your answers to the questions above. Failure-based training is a valuable tool in your training arsenal when applied correctly. If it fits your goals, needs, and preferences then use it wisely and with caution

At Born Fitness, we help you make sense of fitness and nutrition information. If you want to create a plan for your life, here’s how you can stop guessing and start living healthier.