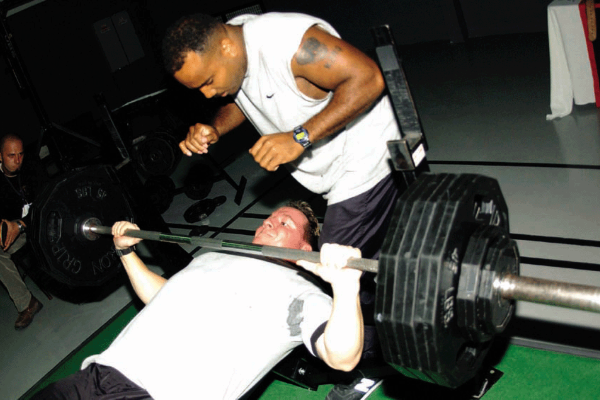 We recently reported on a study that suggested that strength athletes don’t need to do at-failure sets. To tell the truth, we didn’t believe this at all, so we went in search of more research. And yes: we found a study, published in 2005 in the Journal of Strength Conditioning and Research, that draws a different conclusion.

Study
In the study that sports scientist Eric Drinkwater of the Australian Institute of Sport published in 2005, he used 26 young male basketball and football players as his subjects. In addition to the sport they played the subjects had been doing strength training for 3-6 months. Drinkwater divided his subjects into two groups.

Both groups did bench presses three times a week for six weeks, using a weight with which they could just manage six reps.

One group tried to complete the six reps and so trained to failure. The athletes in this group performed four sets. [RF4X6]

The other group did not train to failure and did sets of three reps. The athletes in this group performed eight sets. [NF8X3]

Results
The 6RM – the weight with which the subjects were just capable of making six reps – increased by a statistically significant amount in both groups, but the increase was bigger in the group that had trained to failure.

At the end of the six weeks, Drinkwater got his subjects to shift 40 kg on a bench throw machine. The bench throw is an exercise that develops explosive strength in the upper body. You can see it in the clip below.

The amount of Watts that the subjects managed to generate while doing the bench throw increased by a statistically significant amount in both groups, but the increase was greater in the athletes who had trained to failure.

Speculation
One difference between Drinkwater’s study and most studies in which it doesn’t matter whether athletes train to failure or not is that Drinkwater’s subjects already had several months’ experience of strength training, and this was not the case for the subjects in the other studies. Perhaps inexperienced athletes grow regardless of the type of strength training they do, whether that’s to failure or not.