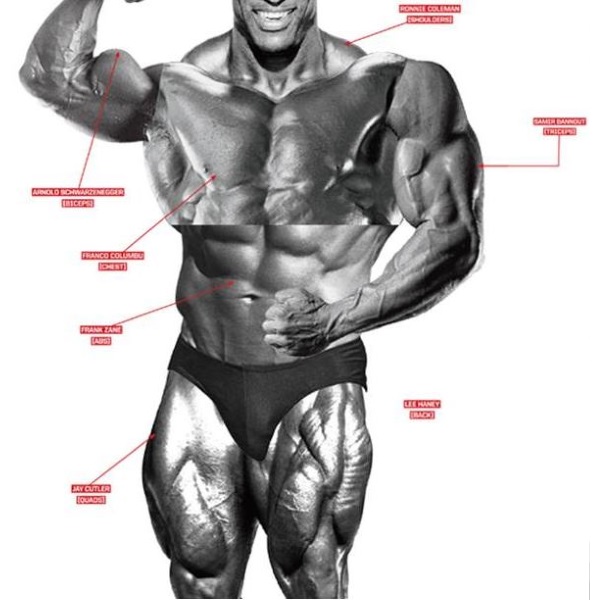 So … you can consider the premise of this blog as thinking outside of the box and simply questioning what you know and what you have been told, taught, thought was written in stone, etc.. I am sure this will surprise some people but … I am simply going to think out loud and put my thoughts to text. I am not even going to say that I believe what I am about to write but that I am merely thinking … outside … of the … box.

Why? Because only a fool would think he has it all figured out and I didn’t get to where I am by listening to other people. Rather, I got to where I am by questioning EVERYTHING. I encourage you all to do the same. Here goes …..

Or maybe it is related but …. nowhere near the end-all-be-all that we think it is? What if form had little to do with progress in the gym? Oh, my mind can be a ****ed up place, sometimes. Let me break it down to a more simple context so that I can keep my thoughts as simple as possible.

We all know that genetics plays a huge roll in how tall you will get, how muscular you will get, how lean you can get, how well your structure allows for you to bodybuild, etc.. What if how you trained played little to no role in how efficiently you grew? Think about it: We have all seen a pro at some point train like **** and …. he is huge. Yet, we have all seen hundreds if not thousands of people train with great form and never look terribly impressive.

Haven’t you seen a guy with huge legs, be it a pro or not, that doesn’t squat to parallel or below? I have seen skinny dudes squat their asses off and still have skinny legs. I have seen guys that squat twice what I squat and their legs suck yet mine are pretty damned good and my numbers would seem, by most, to be pretty sad.

I will also add that steroids are on both sides of this equation as I have seen guys loaded to the gills on gear and they still suck while some of the best pros in the world are on less than most guys at your average state show. The steroid card can’t be played here.

Genetically speaking, haven’t you seen someone that can eat pretty much whatever they want to and stay lean yet someone else can damned near starve themselves and never even come close to being ripped? Women are almost always able to get ripped abs and a ripped back but their hamstrings and glutes can still be soft. How much does your genetic potential play into how lean you are going to get no matter the diet??

Isn’t it possible that form means very little in as far as results or growth are concerned? I think we can all agree that good form is the best proactive way to stay injury free but …. that has little to do with growth. When I say form I am also talking about rep speed, balance from left to right, bouncing, loose form, etc.. Think it’s possible? What about dieting?

What if there is no difference in whether you go low carb, low fat or even low protein? We all believe that protein is an essential nutrient for growth and that protein needs to be high. What if it doesn’t need to be? I have seen people grow on very low amounts of protein. I remember competing as a natural middleweight when I was 22 and only eating 25g of protein per meal for 5 meals a day (along with carbs and some fat) and was in great shape.

Dave Palumbo gets people ripped on low carbs and Chris Aceto gets guys ripped on low fat. I get people ripped after eating a day’s worth of waffles every week. What if it was more genetically related than it was the actual dieting protocol that you are using? Just sayin’.

I see guys train hard all the time and I have seen this for years. I have also observed that some of these guys are pretty big and, yet, some look the same year after year. In fact, some of the hardest training people I have seen were nowhere near the national level let alone a pro. When I say that I want to reiterate that the majority of guys that train balls out are nobodies when it comes to competing.

At the same time, a HIGH percentage of the guys that I know that don’t train hard, at all, are huge and strong as hell. Seems odd to me so I wonder why? Do the guys that train harder than everyone else overtrain more or are most times in an overtrained state? That would explain them not growing much, right?

At the same time, that same ideology would explain why the big guys are growing like crazy – they don’t have recovery issues because they are hardly ever overtrained.

Maybe training like a pussy actually pays off. Wouldn’t that be a bitch? It might suck but …. isn’t it at least POSSIBLE? Speaking for myself I would say that my arms took off with new growth when I decided that I would train them less because they were a strong point and I wanted to give other body parts more of my recovery time and leave my arms to only a few sets at the end of my workouts.

They inexplicably grew to the point that I was getting compliments on my arms all the time. When people asked me what I did for them I would just smile and say “you wouldn’t believe me if I told you”.

I wouldn’t tell them, either. Why? They would have instantly had me pegged as an “easy gainer” and that was about as far from the truth as possible. Training less and growing more… hmmm…..

What about progression? What part does that play? Maybe progression doesn’t do ****, either, and is highly overrated. I mean, I have added 100 pounds to my bench and my chest still sucks. At the same time, those damned arms haven’t curled over a 100 pound barbell in 4 years and yet have grown tremendously.

I was curling 135 for some cheat reps in 1996 at a fat 200 pounds. I now compete at 198 and it is all I can do to get to that weight to compete and I can’t curl anywhere near that right now. My arms are likely over 2 inches bigger now than they were then. What gives? Kinda blows the progression idea out of the water, at least for me.

I use myself as an example but ask yourself about your weights and how long you have been training? Does my situation apply to you, as well? I know MANY seasoned competitors that this is their story, as well. Just sayin’.

What if time under tension played a huge roll or a bigger roll than progression? What if none of it mattered but as long as you trained and used those muscles consistently and let them recover you would keep growing? Does a barbell really make you bigger than a machine? I could tell you of one pro that did pretty much 95% of his contest prep training on nothing but machines. Yeah, yeah, he’s a pro. That just backs up my point, though, so thank you.

I ask you to ask these questions because I am not sure that the little things matter as much as we may think they do. We tend to over-complicate things that don’t need to be over-complicated. This game may be incredibly simple: use your muscles, let them rest, grow and repeat.

Instead, we are doing muscle biopsies to see if leg extensions work the fibers harder than a squat. Really? Why not just do them both? My point isn’t even to think out of the box, really. It is just to think for YOURSELF. Come to your own conclusions as you try to figure out what works for you and what doesn’t.

Don’t hold onto something because someone said “that is the way to do it”. I tell my clients all the time to question me and never to feel as if they can’t ask me why.

Paying someone doesn’t mean you do what they say without asking why or questioning them. Quite the opposite, really: You are paying them so they damned sure better explain things to you and because they are getting paid they should listen to your questions and answer them. Again, I am not using this blog to throw my opinions out there on what I just blogged about. I’m …… just sayin.