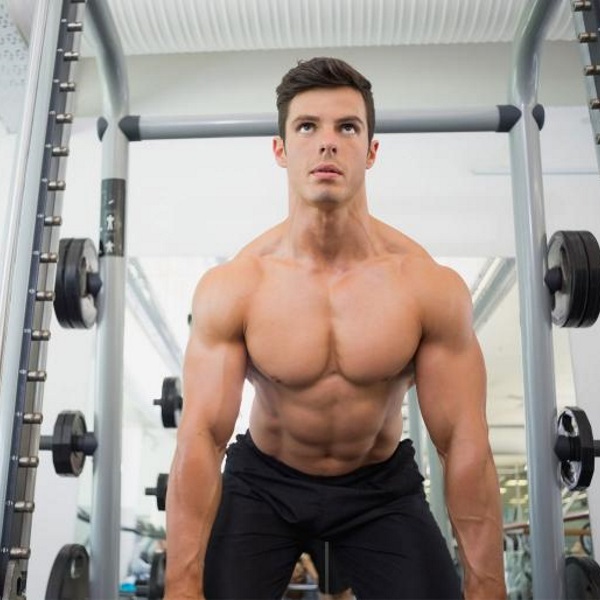 Learn exactly how strength training causes your muscles to build back bigger.

Despite the stereotype of a meathead, it actually takes a lot of brainpower to strategize the best way to build muscle. Most of us know that working out means damaging your muscles, and that it’s this devastation that allows your bis and tris to build back bigger.

But there’s a helluva lot more going on in your body than just lifting a weight, tearing your muscle, and repairing till you’re ripped.

Understanding what actually happens when you strength train—at what point a curl or press causes those micro tears, what nutrients help repair them—can help give you a more comprehensive blueprint on the most efficient and effective way to bulk up and burn fat simultaneously. So trade in your weightlifting belt for your science hat for a moment, and get ready to learn.

Start at the Beginning

Let’s start with the basics: Your muscles are composed of multiple muscle fibers and a network of connective tissue. And while you’re probably ready to jump to muscle damage, it’s actually your nervous system that’s affected first, explains Marta Montenegro, C.S.C.S., nutrition specialist and adjunct professor of exercise physiology at Florida International University.

The second you start lifting a weight, your nervous system does two things: it releases a rush of chemicals while also activating motor neurons, she explains. These motor neurons transport a message to your muscles telling the fibers to start firing, which causes them to contract.

While we think of every lifting session as building our muscles stronger, the key change it’s actually making is training your nervous system to communicate better with your muscles.

It’s like when you’re dating someone—at first, the communication and interaction is a little shaky, nervous with unfamiliarity and therefore not always on target. The more time you spend together, though, the more you begin to understand the most ideal way to talk and interact with one another. “As you keep doing the same movement or workout routine over time, the message and chemicals from your nervous system begin to travel faster and in a more cohesive way to your muscles,” Montenegro explains.

That’s why you don’t see results from a new routine for six weeks or so. Your body first has to teach your neurons how to communicate with your muscles to streamline each movement (curl, squat, jump) so you can then break down those fibers as efficiently as possible.

This is also why you get strong before you get big: “Strength is directly related to how your neurons are interacting with the muscles, which is why before you gain size, you gain strength, since that neural adaptation takes place first,” explains Allen Lim, Ph.D., sports physiologist, cycling coach, and founder of Skratch Labs, a sports drink and nourishment company for athletes.

Okay, quick refresher. There are three nutrients your body can use for fuel: carbohydrates, fat, and protein. Carbs are your body’s first choice because they’re the easiest and most efficient for your system to convert into energy, especially in strength training or short, high-intensity movements like sprinting when you’re in an anaerobic, or low-oxygen, state. Fat, on the other hand, gives you more bang for your buck but requires oxygen to be converted to fuel, so can only be transformed when you’re doing something more aerobic, like running or cycling. Protein is your body’s last resort for fuel—something you never want to force it into because you want to save your protein stores for rebuilding muscle (more on that later).

When we ingest carbs throughout the day, our body converts it into glucose and stores it in the liver and muscles as glycogen. To contract and perform movement, muscles need glucose, Montenegro explains. Among the other signals firing in your system, one is for your metabolism to pull from your glycogen stores, convert it back to glucose, and feed your muscles for the motion.

Your body is always undergoing this process, Lim adds. (It’s what’s known as your basal metabolic rate, or the amount of calories you burn without exercising.) The only difference is that when you hit the gym, you’re stepping on the gas and therefore gobbling up more fuel to help your muscles fire faster and facilitate those curls, squats, and presses, he explains.

The Damage Is Done

When you work out, you’re actually doing damage to your body. It creates tiny tears on your muscles, and this is what allows the fibers to grow back bigger and stronger—we all know this. This damage, though, is caused by a handful of different factors.

The most obvious is that when you lift a weight, this puts tension on your muscle fibers. It’s really only half of each move in a strength session that does damage, though.

Let’s take a bicep curl for example. When you bring the weight up toward your shoulder, this is the concentric phase, which is the shortening of the muscle. When you let the weight down—known as the eccentric portion—that’s when the real damage is done. “Even though there’s the same amount of load on the fiber, during the eccentric phase you’re more relaxed as you lengthen the muscle. Without as much tension, the muscle is hit harder and more damage is done,” Lim explains.

The second vehicle of damage is your extra-stimulated metabolism. Our bodies naturally produce toxins as by-products of our metabolism, like the exhaust in a car engine. When you workout, you’re not only revving production of your natural metabolic toxins (like hydrogen ions), but also producing ones unique to the burning of glucose, like lactic acid. “The various chemicals your body is now producing contribute to the good microtrauma you’re doing to the muscle fibers,” Montenegro explains.

Now, suddenly, instead of being smooth and beautiful, your muscle fibers have tiny tears all over them, like cracks in a sidewalk.

Why We Call It Quits

What was just described on the last page is the damage you do with each curl, squat, and jump. But what’s going on when you just can’t churn out a single other rep? What causes your muscle to throw in the towel is a grand mystery, Lim says.

Researchers have done experiments where they’ll put electrodes on a muscle and when a person has done so many curls that he’s completely spent, the scientists externally stimulate the muscle. Suddenly, his bicep is perfectly fine and he can start pounding curls again.

“What this means is it’s not your muscle itself that’s fatiguing—it’s your nervous system. The literal connection between your brain and that muscle is what is starting to get shaky,” Lim explains.

Some experts think this is a failsafe, our brain’s way of protecting us from doing so much damage in one sitting that we won’t be able to recover. There are also certain metabolic factors potentially coming into play—we’re producing more acid than our kidneys can filter, and this metabolic acidosis might be impeding muscle contraction, Lim offers.

In short, the jury’s still out on why our muscles reach fatigue. But, the interesting thing is that as we train and garner that neurological adaptation, we reprogram that chip, which is part of the reason you can go harder and longer once you’ve adapted to a workout.

Remember all those micro tears you’ve caused to your muscle fibers? Now your body has to patch up that damage.

What’s happening on a microscopic level is a cascade, Lim says. You have the initial insult, and now dominos are falling to start a very complex cellular process to ultimately synthesize new proteins.

Every time a muscle contracts, there’s a release of calcium. The harder it contracts, the greater the release. “It’s thought that the combination of tension and calcium is what sends messages into the nucleus of a muscle that says, ‘Hey, we need to start adapting and make new proteins,’” Lim explains.

Just like how you have carbs and fat stored for fuel, you also have an existing pool of amino acids, the building blocks for protein. While you can use all three for fuel, you can only use protein to repair muscle damage.

The focus is on patching contractile proteins, the type of muscle fiber in charge of generating a muscle contraction and therefore the kind that sustains the most damage. Contractile proteins are mostly made up of the essential amino acids that your body doesn’t produce naturally, which is why it’s crucial to ingest complete proteins that provide these building blocks, Montenegro explains.

That’s also why you want to avoid forcing your body to burn protein as fuel, like we mentioned earlier. It’s not only crazy inefficient compared to burning carbs or fat, but it also robs you of the stores needed to repair your muscles (don’t worry, as long as you’re eating a balanced diet, you won’t be so deplete of the other macronutrients for this to happen).

You have a 60-minute window in which your muscles are more receptive to making the most out of the nutrients you give them, she adds. Think of it like this: When you workout, you’re revving your body and pulling it out of equilibrium. After your workout, your body is trying to get back to its baseline. It’s therefore most receptive during the time period where it’s working full steam ahead to make repairs.

The window for muscle protein synthesis narrows after 60 minutes, but it stays open for roughly 24 hours, according to a 2012 meta-analysis in Nutrition & Metabolism, so it’s equally important to refuel post-workout as it is to consume protein throughout the day (about 25 grams at every meal is ideal, Montenegro says). It’s also crucial to refuel your carb stores to power your body’s ability to synthesize the protein, she adds.

Simultaneous to your muscles synthesizing protein, your immune system is reacting to the damage. Strength training is essentially like putting a jackhammer to the sidewalk that is your muscle fiber, Lim says: You’ve damaged the original foundation, and now you have to clear out the rubble before you can pour the improved layer of cement. Your immune system activates an inflammatory response which works to clear the cellular debris by bloating your cells with extra fluid, dilating your blood vessels, and surging immune cells to help repair. It’s this sweep-through by your immune system that you feel as muscle soreness, he adds.

So what’s actually happening to your muscles as they repair? Think of muscle fibers like spaghetti noodles, Lim offers. Your muscles are made up of a handful of these noodles all stacked on top of one another. When you cause microtears to the fibers, amino acids come in and patch over the damage. You’re not actually creating new fibers, but you are causing each one to get bigger in diameter, just like how spaghetti expands once it’s cooked, he explains. Suddenly the same number of noodles or fibers takes up more space, causing you to look bigger, which is called hypertrophy.

The process of inflammation and muscle protein synthesis starts immediately after a workout and continues for a few days. If you’re working out every day, your body is perpetually in repair mode, which is why it’s so important to give yourself a rest day so your body can catch up on the damage.

While the response is the same in everyone, the extent to which your fibers will swell varies from person to person, based on a ton of factors including diet, training intensity, and, most importantly, genetics.

So there you have it—the science behind getting swoll.