The Myth of 1 g/lb: Optimal Protein Intake for Bodybuilders

Protein. It’s every bodybuilder’s favorite macronutrient and for good reason. Protein is extremely essential, super satiating and amazingly anabolic. Protein is awesome… but you’re consuming too much of it.
Like most myths, the belief that you should take in 1g/lb of body weight has become so deeply entrenched in the fitness world that its validity is rarely questioned. Strangely, very few people think it’s a bit too accidental that the optimal amount of protein your body can assimilate in a day is exactly 1g/lb. 2.2g/kg doesn’t sound as right, does it? Of course, I know you read my articles for their scientific merit, so let’s look at the literature on the effects of daily protein intake to find out if 1g/lb really is the optimal amount of protein intake for maximum muscle gains.

Studies on the optimal protein intake

Now, there are some old studies based on nitrogen balance that suggest (but never found) higher protein intakes are beneficial, but, as I stated above, these studies were methodological abominations. Nitrogen balance is a notoriously unreliable method to assess changes in lean body mass, especially at higher amounts, and these studies didn’t control for sweating or dietary adaptation. Significant changes in dietary protein intake are known to result in negative nitrogen balance for up to 2 weeks after the change, even when sufficient energy and protein is consumed. Furthermore, these studies didn’t exclude androgenic-anabolic steroid users though they studied competitive athletes. (Tarnopolsky et al., 1988). It’s no wonder many of these studies didn’t get translated and remain no more than a shady abstract on PubMed, if they’re even featured on there.

Based on the sound research, many review papers have concluded 0.82g/lb is the upper limit at which protein intake benefits body composition (Phillips & Van Loon, 2011). This recommendation often includes a double 95% confidence level, meaning they took the highest mean intake at which benefits were still observed and then added two standard deviations to that level to make absolutely sure all possible benefits from additional protein intake are utilized. As such, this is already overdoing it and consuming 1g/lb ‘to be safe’ doesn’t make any sense. 0.82g/lb is already very safe.

The picture below summarizes the literature. As you can see, 1.8g/kg (0.82g/lb) is the point at which additional protein intake ceases to yield any benefits. 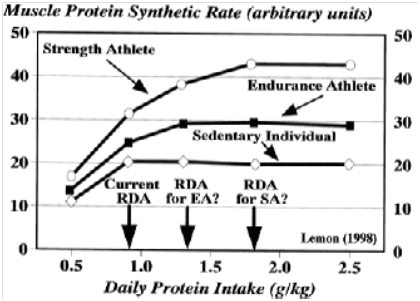 But I train harder!

If you still think you need more than 0.82g/lb because you think you train harder than these test subjects, think again. Lemon et al. (1992) studied bodybuilders training 1.5 hours per day, 6 days per week and still concluded 0.75g/lb is the highest intake at which body composition benefits could occur.

But I’m more advanced than these geeks!

Another frequently heard objection is that people need more protein because they are more experienced than the studied populations. Well, Tarnopolsky et al. (1988) used elite bodybuilders and found that less protein was needed than in novice bodybuilders.

In everyone there is both constant protein synthesis and breakdown. Resistance training causes both breakdown and synthesis to increase, normally with a favorable balance towards synthesis. As you progress in your training, the body becomes more efficient at stopping the breakdown of protein resulting from training. Since less protein now needs to be replenished, this increase in nitrogen retention means less protein is subsequently needed for optimal growth.

Secondly, the more advanced you are, the less protein synthesis increases after training. As you become more muscular and you get closer to your genetic limit, less muscle is built after training. This is very intuitive. The slower you can build muscle, the less protein is needed for optimal growth. It wouldn’t make any sense if the body needed more protein to build less muscle, especially considering that the body becomes more efficient at metabolizing protein.

But what about when cutting?

A final objection that is often heard is that these values may be true during bulking or maintenance periods, but cutting requires more protein to maintain muscle mass. Walberg et al. (1988) studied cutting weightlifters and they still found 0.73g/lb was sufficient to maintain lean body mass.

A perhaps even more telling study is by Pikosky et al. in 2008. The researchers took a group of endurance trained subjects and had them consume either 0.41 or 0.82 g/lb of protein per day. They also added a thousand calories worth of training on top of their regular exercise. So these guys were literally running on a 1000 calorie deficit while drastically increasing their training volume. Talk about a catabolic state… Of course the nitrogen balance in the low protein group plummeted. However, the protein intake of 0.82 g/lb in the other group completely protected the subjects from muscle loss. Nitrogen balance, whole-body protein turnover and protein synthesis remained unchanged.

A further review of the literature on the optimal protein intake in a deficit can be found in this article of the research on protein by Eric Helms.

Also, the supposed difference in nitrogen sparing effects of carbs and fat are negligible (McCargar et al. 1989; Millward, 1989). Neither actually spares protein though. Only protein spares protein. I think the protein sparing idea came from a wrong interpretation of the nitrogen balance literature showing more lean mass is lost in more severe caloric deficits. A simple explanation for that finding is that the more total mass you lose, the more lean mass you lose. No surprises there.

As such, there is simply no empirically substantiated reason to think we need more than 0.82g/lb of protein per day when cutting. If anything, you could reason the body should be able to use more protein during bulking periods, because more muscle is being built and a lot of other nutrients are ingested that may enable more protein to be used.

The only people that may actually need more protein than 0.82g/lb are people with unusually high levels of anabolic hormones or beginners. Androgen or growth hormone users definitely fall into this category, but I don’t exclude the possibility that some adolescents do too. If you reach peak testosterone production while still growing (in height), your unusually high levels of growth hormone and testosterone might increase your protein requirements. Or not. There’s no research to support it. Those rare individuals with amazing bodybuilding genetics could also qualify, but unless your father happens to be a silverback gorilla, you are most likely just like other humans in this regard.

Why is it then that everybody says you need to consume 1g/lb? Aside from the facts that there don’t need to be any good reasons for why people believe in a myth, that myths tend to perpetuate themselves via conformism and tradition, and that the fitness industry is flooded with myths, here are some plausible grounds for the ‘confusion’.
• People copy the dietary practices of pro bodybuilders on androgens. Steroids enable you to assimilate far more protein than you’d normally could.
• People based their recommendations on the flawed nitrogen balance studies back from when the world was still flat.
• The more is better heuristic. There are so many studies showing protein is good for you, it’s hard not to think more of it is even better.
• Supplement companies have an obvious financial incentive to make you want to believe you need more protein than you really do. There are actually several industry-sponsored studies showing absolutely miraculous benefits of consuming more protein (see for example the studies by Cribb).
• People can’t be bothered with decimals and just round up to the nearest convenient integer, which so happens to be an easy to remember 1. 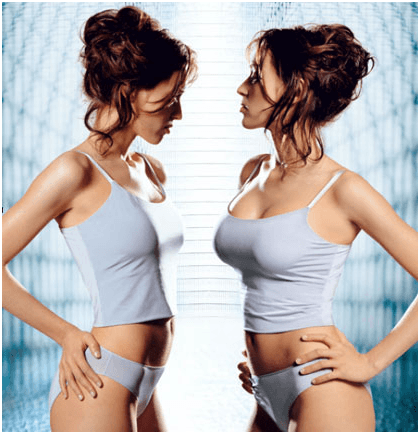 Often, more is better, but at some point it’s just too much.

On a final note, there’s nothing inherently wrong or unhealthy about consuming more protein than your body can use to build muscle. The excess will simply be used as energy. However, protein sources tend to be expensive compared to other energy sources and variety generally beats monotony with regards to your health, so satiety and food preferences are the only reasons I can think of why somebody would want to overconsume protein.

• There is normally no advantage to consuming more than 0.82g/lb (1.8g/kg) of protein per day to preserve or build muscle once you’re past the novice level as a natural trainee. This already includes a mark-up, since most research finds no more benefits after 0.64 g/lb.
• Optimal protein intake decreases with training age, because your body becomes more efficient at preventing protein breakdown resulting from training and less protein is needed for the increasingly smaller amount of muscle that is built after each training session.