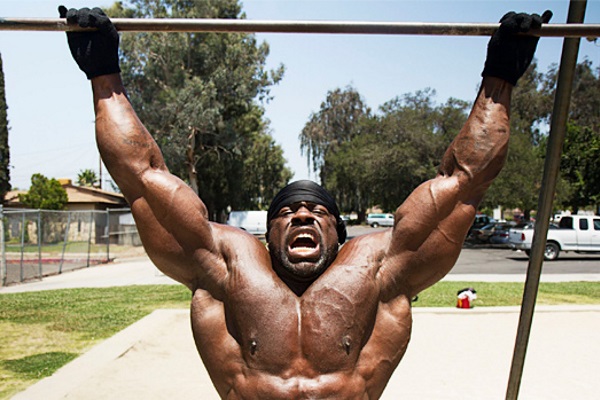 If you’re small and weak, this is either going hurt your feelings or help you get bigger and stronger.

Why can’t you build muscle mass? Well, probably because you suck at eating and training. Here’s how you can stop sucking and finally put on some size.

1 – You Suck at Eating
Meal frequency is important. You need to use several strategies to get in more calories. Also, stop it with the intermittent fasting crap.

Guys who are weak and small all think they eat a lot, but they actually really suck at it. Oh, you ate two large pizzas once? Okay, did you do that six times that day? No? You only ate one other meal? And then the rest of the week you ate like a runway model?

Skinny guys have the same misconception about eating as fat guys do about how jacked they are. Neither lives in reality. The fat guy always thinks he only needs to lose 15 pounds to be ripped when in reality it’s more like 50. And the skinny guy thinks he eats a lot when in reality he eats, well, like he looks. Small.

For a while, intermittent fasting (IF) was the big rage. Why? I have no idea. If you’re trying to build as much mass as possible, then how does going long periods of time without eating seem logical in any way, shape, or form? Spare me the “fasting increases GH production” nonsense. It doesn’t increase it enough to make a difference. I saw lots of guys who did IF. They were all really lean. And they all weighed about 160. No one cares about your abs if you’re 160. If you’re trying to gain mass, then let me quote Obi-Wan and tell you, “This is not the diet you are looking for.”

Granted, there have been lots of studies that say meal frequency doesn’t have an impact on fat loss or weight gain. Well, I’ve been in this game for 26 years, and every jacked and massive individual I’ve ever known ate a lot of food at each meal, in addition to eating frequent meals every day. If you’re eating four meals a day, regardless of caloric intake, what do you think happens with a fifth meal? You get more calories in, of course. A sixth meal? More calories. Seven meals?

I know, you’re having trouble comprehending the destruction of that tactical-nuke knowledge bomb I just laid on you, but I swear it’s that simple. This seems like really basic knowledge, but you’d be surprised how many guys cling to a study that says meal frequency isn’t important, then ignore that every swole guy they see eats multiple times a day. At what point does 30 years of meal frequency producing legions of jacked-up lifters outweigh a few studies?

“But I have trouble eating a lot.” Honestly, I do too. And I’m not asking you to wake up Monday morning and start shoveling in 10,000 calories a day when you’re used to eating 2,000. This is no different than setting lifting goals. You don’t set a goal to deadlift 800 when your best deadlift is 500. You set your sights on a 515 deadlift next. Then 535.

Easy ways to help your body adjust to eating more food:
Add a shake after every meal or between every meal. Even if you’re only eating three meals a day, throwing in a shake after each meal is a very simple way to up your calories. If you add a tablespoon of olive oil to each shake, that’s 119 extra calories. If you have just three shakes a day, that’s an additional 357 calories just from olive oil.

If you’re using protein powder and use two scoops, that’s give or take about 220 calories, plus the 119 from the olive oil and that totals 339 calories per shake. At three a day that’s over a thousand extra calories a day. If you find it too hard to add the shake in after each meal, drink one between meals. Either way, it’s an extra 1,000 calories, and drinking calories is easier than eating them.

Have one big shake a day. Back in the day, all of our shakes were made using blenders. The powders pretty much required it, but this also allowed you to easily add in lots of stuff and you could create some pretty delicious shakes. Try it. Buy a blender, add protein powder, egg whites, peanut butter, bananas, milk, etc. until you fill it to the top. Over the course of the day, sip on it. Set a goal that you’re going to finish every last drop by end of the day. If you want to be anal and track your “macros” then just add up what you’re putting into it.

When I was 17, I used the following recipe to go from 170 pounds to 210 pounds over one summer. Of course, I was also eating to the point of gagging almost every meal (which was every two hours, mind you), but I also managed to get this in each day as well:

If your response to this recipe is that looks like diabetes waiting to happen, then you’re probably one of those really skinny guys that can’t gain weight or whose muscles “disappear” when you put on a T-shirt. Look, when you’re 150 pounds with negative percent body fat, you probably don’t have to worry about getting diabetes because of sugar intake. You should be more worried about the fact that girls half your size are outlifting you in gyms all over the world.

2 – Your Training Intensity Sucks
Put on your gym-face. Add intensity-extending techniques into your program.

I can’t tell you how many times someone’s said to me, “I saw you training at my gym the other day. I was going to come say hi, but you looked pissed off.” I’m not pissed off. I’m training. I’m in the gym to train, not to socialize. And to me, training requires a great degree of concentration. Your gym-face should reflect your attitude about your training. Don’t wear your gym-face to the club, and don’t wear your club-face to the gym.

In between sets, however, I do pay attention to my surroundings… at times. And I see a lot of people in the gym wearing their club-face, socializing, and having a great time. And if that’s what you’re there for, that’s fine. So long as you don’t impact my training, I don’t care. Not everyone wants to grow as much muscle mass as possible or get maximally strong.

But if you do, then you need to train like it and take your time in the gym seriously. People often lose focus because they have very mundane routines that don’t actually require them to focus. In other words, there’s no reason to concentrate or get your gym-face on because your training program doesn’t require it. Or maybe you just suck at training really hard.

Back in the day, one of the biggest staples of leg training was high-rep work. Twenty-rep squats, 50-rep leg presses. You know, hard shit. Guys used set-extending techniques like drop sets, rest/pause, running the rack, and all sorts of methods that drew the set out as long as possible and created a ton of metabolic stress. They didn’t even know what the term “metabolic stress” was. All they knew is that when they trained really, really hard, they grew.

Now I see the net filled with memes like “anything over three reps is cardio.” Look man, even the hardest of three-rep maximal sets can’t be compared with a high-rep all-out set of squats. It’s not that a three-rep max set isn’t hard, but the two just aren’t comparable. At some point in your training life, you’re going to have to sit down and come to the conclusion that if you want to move forward in regards to progress, you’re going to have to train your ass off.

The fact is, almost all of us get stuck in a rut of complacency, or we lose the desire to train really freakin’ hard. A great way to bust out of this rut is to add in some set intensity-extending techniques that force you to set personal goals at each training session. My personal two favorites:

I prefer these two set intensity-extending techniques to all the others (drop sets, super sets, giant sets, etc.) because goal setting is involved. You can do a conventional drop set and not put a lot of effort into the set, but if there’s a number you must match or improve upon, it’ll increase your focus and intensity tremendously.

At some point there has to be more weight added to the bar, or more reps done with the same or more weight. This doesn’t mean you sacrifice form or movement execution for weight on the bar. It simply means that progressive overload, especially for the small and the weak, should be the cornerstone of your training ideology.

3 – You Suck at the Exercises You Hate
The best way to make progress is to do movements you don’t like doing.

This actually applies to just about anyone who gets stuck in a rut. However, let’s just be honest here, there’s an infinite amount of curls done every day in gyms across the world compared to squats. The reason is quite simple – squatting is hard while curls aren’t. But outside of that, one reason why lots of guys don’t grow or improve is because they keep doing all the things they love to do while avoiding all the shit they hate.

4 – You Suck Because You Don’t Train Enough
Overtraining is rare. The truth is, most people don’t train often enough.

If you can’t move very much weight, then there’s really no way you’re going to “overtrain.” In fact, it’s pretty damned hard for even an advanced guy to overtrain if his diet and sleep are on point.

One of the most popular training splits from back in the day was the three-on/one-off split. Lee Haney made this split popular back in the 80’s and 90’s, and because he won the Mr. Olympia eight times, people thought maybe he was on to something. It’s been shown repeatedly that training frequency is a major factor in regards to hypertrophy. So why are you training your bird-like chest once a week with a 185-pound max bench when you should be training it at least twice a week?

The No-Suck Training Program
For the first three days of this program, here’s a rule you must follow: only choose exercises you hate. If you suck at the movement, you must do it.

Why Do Isolation Exercises Before Compound?
This is done mainly for improvement of muscle activation in those areas. Lots of guys perform quad or hamstring compound exercises so poorly that they’re lagging in one or both of these areas. However, if you begin leg training by activating those areas through isolation movements first, then there’s a greater chance they’ll be more active in the compound movements that follow.

Built-In Focus
You might have also noticed that there’s a built-in intangible to this program. You’re going to be put into a position every week to beat the previous session’s “best work.” So instead of having time to lollygag around in the gym and repeatedly ask that hot chick if she needs a spot, you’ll actually need to focus on your training. The alternative is that you’ll continue to suck.