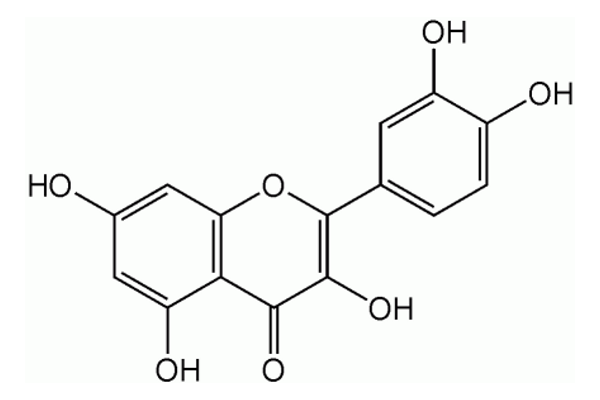 Many herbs, as well as onions, red wine, green tea and the peel of red apples, contain large amounts of the flavonoid quercetin. According to an Italian study, this compound has an anti-oestrogenic effect. In a test tube it’s possible to see that quercetin intercepts the estradiol receptor’s signal to the cell.

Quercetin
Supplements manufacturers have been aware of the anti-oestrogenic effect of quercetin for years. Quercetin is an ingredient of Estrox, for example, a supplement made by Ori Hofmekler’s Defense Nutrition. [defensenutrition.com] Hofmekler is the person who thought up the Warrior Diet. He’s a pioneer of the intermittent fasting trend, but has also written about anti-oestrogenic foods and supplements.

There is plenty of circumstantial evidence for the anti-oestrogenic effect of quercetin. A Polish epidemiological study for instance has shown that women that drink large amounts of green tea have less estradiol in their bodies. [Br J Nutr. 2006 May;95(5):989-95.] In a Korean test-tube study ginkgo inhibited the effect of estradiol [J Steroid Biochem Mol Biol. 2006 Aug;100(4-5):167-76.] and in a similar American study the same effect was attributed to goji. Green tea, ginkgo and goji all contain quercetin – and lots of other substances too.

Quercetin as an anti-oestrogen
In 1999 Italian cancer researchers published the results of a test-tube study in the British Journal of Cancer, in which they had studied the effects of quercetin [structural formula shown here] and the soya isoflavone genistein on estradiol-sensitive breast cancer cells.

At a concentration of 1 micromole quercetin had no effect, but when the researchers exposed cancer cells to estradiol, quercetin inhibited their growth. [Shown by the bars with spots below]. Genistein had the same effect [The bars with the diagonal stripes].

When the Italians added 10 nanomoles estradiol and 5 micromoles genistein at the same time to the cells, these made more copies of the genes cathepsin D [black bars in the figure above] and pS2 [transparent bars] than when the cells were exposed to estradiol only. Cathepsin D and pS2 are controlled by the estradiol receptor. So in this case genistein enhanced the effect of estradiol.

Quercetin worked differently. At a concentration of 1 micromole, quercetin reduced the effect of estradiol on cathepsin D and pS2.

In other experiments the Italians were able to show that genistein is reasonably good at attaching itself to the estradiol receptor, but quercetin is not. The researchers suspect that quercetin in some way deforms the estradiol receptor. Estradiol is still capable of forming a complex with a deformed receptor, but the complex is rendered inactive.