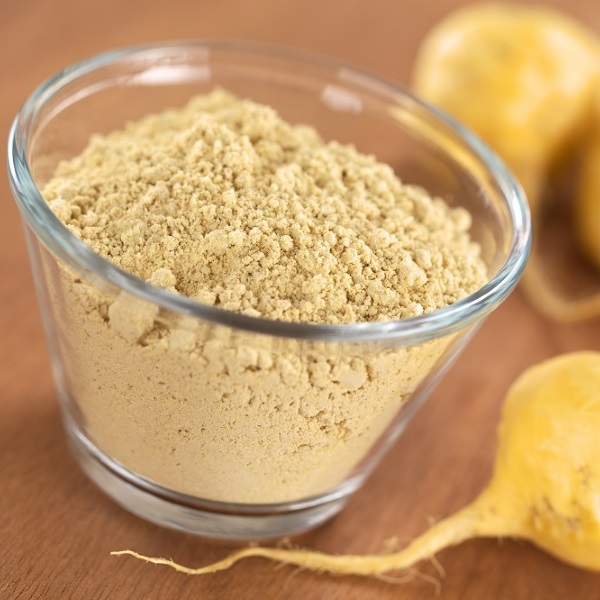 Before you get all-too-excited; let’s be clear about this: An increase in natural testosterone production will not produce the same increase in muscle mass and reduction in body fat as injectable testosterone. As I’ve explained in two previous articles (“Understanding the Big T”, “Quantifying the Big T”), the difference lies in small constant (T-booster) vs. extreme and slowly declining increases in testosterone (T-injection | see Figure 1). If you take a look at the dose-response graph I created for the former article, you will yet realize that this does not mean that a significant boost of low-ish T-levels wouldn’t have benefits – especially on your body composition.

With that being said, there’s a second thing I must say right away: both studies I will discuss in today’s article are rodent studies (rats to be specific) and need confirmation in humans – follow up studies that confirm the >100% increase in testosterone with really high doses of MACA extracts and >300% increase in response to high dose garcinia cola supplementation.
Don’t forget to work out – Without exercise you’re not going to get lean and jacked, bro!

Whut? No, those are no typos. The treatments did in fact more than double the total testosterone concentrations of the rodents in the studies from the Graduate School of Life and Environmental Sciences of the Osaka Prefecture University (Ohta. 2016) and Walter Sisulu University in South Africa (Sewani-Rusike. 2016).
MACA – Lepidium meyenii (maca) is a plant growing in Peru’s central Andes, of which you’ve certainly heard that it has traditionally been used for enhancing fertility and reproductive performance in domestic animals and human beings.

In their latest study, scientists from the Graduate School of Life and Environmental Sciences of the Osaka Prefecture University (Ohta. 2016) examined whether feeding a hydroalcoholic extract powder of maca for 6 weeks would affect the weight of the reproductive organs, serum concentrations of testosterone and luteinising hormone (LH), number and cytoplasmic area of immunohistochemically stained Leydig cells, and steroidogenesis of cultured Leydig cells in 8-week-old male rats. 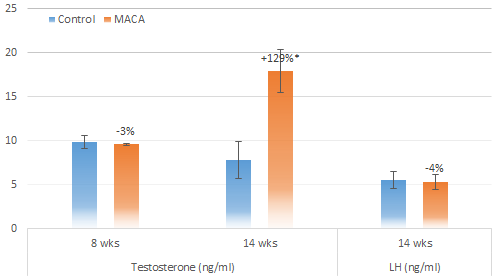 As you already know, the scientists observed highly significant improvements of the testosterone levels (see Figure 1). In addition, feeding the extract powder increased weight of seminal vesicles and cytoplasmic area of Leydig cells when compared with controls.

The best news is that this happened in the absence of increases of prostate gland weight, and without increases in serum LH concentration that would suggest that the leading cells, the number of which didn’t increase either, wouldn’t produce T as effectively, any longer. This also implies that the provision of what would be ~12g of MACA per day (2% of the diet were a proprietary MACA extract called MACAXS™ | no sponsorship or support declared) increased the testosterone production by Leydig cells significantly – a result and mechanism the scientists were able to confirm in vitro.

But isn’t there human data, already, which refutes these results? To my knowledge the answer to this question is “NO”. Not because there were no studies on the effects of maca, for example, on libido and testosterone, but rather because these studies used, just like a study by Gonzales, et al. from 2002 doses that were not just >5x lower than the human equivalent in the study at hand, but also based on regular gelatinized maca powder, instead of an extract, as it was used by Ohta, et al. Against that background it is, by the way, even more surprising that Gonzales et al. still observed a beneficial effect on the libido of their 21–56 year-old male subjects.

Garcinia cola – Commonly known as bitter kola due to its bitter taste, the garcinia cola nut is traditionally served as refreshment. Medicinally, however, it has been used for centuries to treat abdominal pain, cough, laryngitis, liver disease infections and erectile problems (Irvine, 1961; Odebunmi et al., 2009). In previous studies, these effects have been ascribed to phytochemicals like biflavonoids, xanthones, triterpenes, cycloartenols and benzophenones (Terashima. 2002; Adaramoye. 2005 & 2006), agents of which scientists have found only recently that they can increase testosterone and male reproductive function, as well (Farombi. 2013). Sewani-Rusike et al. were inspired by the results Farombi et al. published in the Journal of Ethnopharmacol and investigated the effects of different doses of a crude extract of G. kola on male sexual function after subchronic and chronic treatment periods at different sublethal doses (the lethal dose is 5000mg/kg in rats and 30g/kg in humans).

As you can see in Figure 2 there’s an initially surprising disconnect between the effects on testosterone and the markers of sexual function (lower mount and intromission latency indicate more horny). Since previous studies (also in humans) have already shown that there’s this disconnect between normal-high and high testosterone levels and their effect on libido, the results are eventually not as surprising as you would expect. Therefore, the observation that lower doses were eventually the most effective when it comes to increasing the components of libido, erection and ejaculation, is not really surprising. Neither is the fact that the scientists observed increases in testicular weights, and sperm count, with no change in motility and gonadotropin levels.

Since the gross testicular histology was not affected by the 70% ethanolic extract of garcinia cola the scientists used in this study, the only thing that’s missing to call garcinia cola a “proven T-booster” is the lack of human studies investigating its effects and safety at human equivalent doses of 16, 32, and 64 mg/kg body weight.

Bottom line: Even though I may sound like a broken record, I want to repeat that doubling and even quadrupling your testosterone levels will not double, let alone quadruple your strength and size gains. And still, if you’re looking for a T-booster to get your suboptimal T-levels back in range, the studies by Ohta et al. (2016) and Sewani-Rusike et al. (2016) provide two new reference points with respect to potentially effective ingredients – ingredients of which only one, namely MACA, has already been used extensively, but at far too low doses (remember, the HED in the study at hand was ~12g of an extract, which is not the “normal” MACA powder you can buy everywhere) in currently and previously available T-boosters | Comment on Facebook!