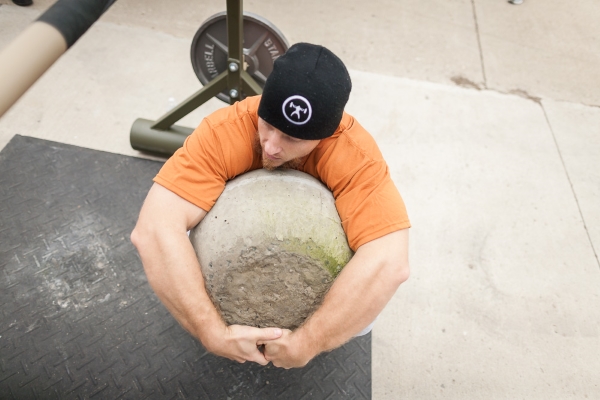 Strongman has an aspect to the events that is unique compared to many of the other strength sports: in strongman, some of the events are for max reps in a given amount of time. The time stays the same whether it’s a really heavy implement where athletes might get one to four reps or a lighter event where athletes are hitting more than 15 reps. Here lies the strategy of a timed event for reps.

You need to figure out which pace allows you to hit the most reps. If you are only likely to hit two to three reps, it doesn’t make sense to do three in 15 seconds and then stand there getting buried by the weight for another 45 seconds. It also doesn’t make sense to pace yourself slowly for an event where 20 reps will win. This is where sports specific training comes into play. I’ve come up with a couple strategies on training your ability to do reps over the full course of 60 seconds.

The first thing I’ll have an athlete do is use contest weight for 30 seconds of reps. The goal here is not to see how many reps they can hit in 30 seconds, but rather start to figure out a sustainable pace that they can continue with for the entire duration. The reason for multiple sets is that we’re looking for the pace to be repeatable. I have found some athletes have difficulty with feeling where they are within the time allotment. This method allows them to get a better feel for it. As long as their pace is highly repeatable, they’ll be able to tell within seconds where they are in the time limit.

The next step is to start having them perform the 30 second sets with short rest intervals. In other words, if they did 30 seconds of work and then rested for three minutes for three sets, we can consider it to be a seven minute and 30-second long set for our purposes. Now we cut the rest to two minutes. Then, 60 or 90 seconds. At this point, they’re doing the same amount of total reps but in a lesser overall time. You can then cycle back through it. Change the time limit to 40 or 45 seconds and repeat. Finally, have them do straight sets of 60 seconds.

You would start this technique several weeks out from the contest to allow enough time to make micro progressions during the entire duration of your training cycle. If the weight is very heavy for an athlete or their technique is suffering, I would not use this method to work on technique. Rather, what you could do is have them do technique work separately. You could either do 60-70% for some sets before you start the timed work and utilize it as a sort of warm-up, or you could just land it on a separate day. If they’re lacking that much on the event, an increase in frequency would certainly help them.

I have found that this allows athletes to be highly consistent so that going into an event they know within one rep how many total reps to expect. At most contests, they announce the time at least once as well, or an athlete can always ask, so they will know whether they can speed up a bit or if they’re right on pace. I’ve also found that this is a great way to squeeze out a few more reps with athletes where the weight is very heavy for them. They do a rep, step back, gather, and go. I have taken athletes that could barely get a rep to having them do three to five reps. At a big contest, that is a massive improvement in points results.

I have also found that this benefits the athletes that might be hitting higher reps. This allows them to get comfortable with the time limit so they are not rushing. I’ve seen athletes get tripped up before because they know they need a lot of reps — they start out great and then one rep gets off groove and it takes a ton of time for them to regather and get back on pace. In the meantime, they’ve lost a ton of time and, along with that, a ton of reps. This technique allows them to go about the time limit with a controlled sense of urgency.

Start working on this with your athletes and you will see great improvements. I’ve always found that people lack direction in their strategy and that it would be better spent on other things. For instance, rather than getting consumed with how high the pick is on a deadlift apparatus or how far apart the yoke uprights are, spend your time worrying about things that you can control. I’ve also seen far too often guys that could barely get a rep or two going all out insane for the first 15 or 20 seconds only to struggle for the remainder because they somehow thought they would be able to hit an eight-rep PR at the contest. Getting strong is a huge aspect to strongman but so is tactical preparedness, just like any other sport.