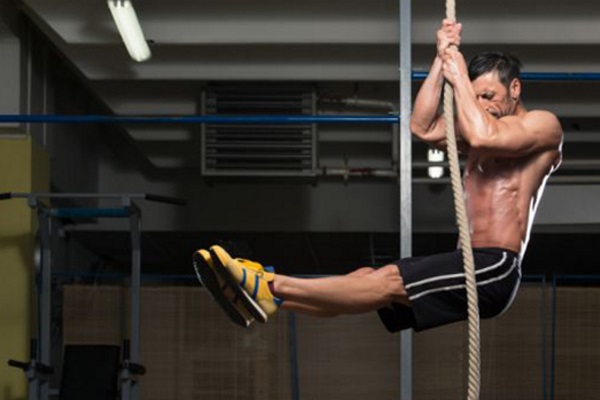 Fat Is Slow
An exercise physiology professor of mine once conducted a study on the sports teams of the school.

He then conducted an analysis to find which anthropometric variables had the strongest correlation with performance and which tests correlated together.

The result that stuck in my mind was the lack of correlation (positive or negative) between body weight and speed and power. And the strongest correlations with sprinting speed? Body fat percentage and lean body mass. In fact, body fat had a correlation to speed just as strong as the vertical jump.

What does that mean?

It means that if you’re an athlete, you should stop worrying about becoming slow because of building “too much” muscle. You’ll only become slower if you get fatter.

As Big As Possible, As Lean Possible
As an athlete, you should shoot for being as muscular and lean as possible, within the realm of safety and health of course.

Athletes who talk about becoming slower when they gain mass are those who add too much fat in the process. Fat makes you slow; muscle makes you more powerful and, ultimately, faster.

The thing is, people underestimate how much fat they gain when they decide to bulk up. You know my view on the topic: I do not think it’s acceptable to gain fat just to build muscle, especially not if you’re an athlete needing speed.

Sure, you might gain a few pounds in the process, but when that happens you should take a few weeks to get rid of the fat prior to your season/competition period.

Fat is just dead weight you have to carry around. Wear a vest as light as 10 pounds and you’ll see a significant difference in your 40 yard sprint time. If you gain 10 pounds of fat it will have a similar effect.

Fat also increases intramuscular friction – when you gain fat, you also add fat inside the muscle – which makes for a slower speed of contraction.

The CrossFit Conundrum
In more traditional sports, athletes are less and less afraid of losing speed by adding muscle. But I still see that fear among CrossFitters.

Competitive CrossFit athletes are afraid of adding muscle. They worry that their body weight skills will be affected. Yet the same people marvel at the muscle mass of guys like Jason Khalipa and Neil Maddox.

Understand one thing: muscle moves weight. Yes, technique is important. Neural efficiency too. But ultimately it’s the muscle you have that moves the weight. And there’s only so much strength you can gain while staying at the same level of muscle mass.

With the ever-increasing emphasis on strength in CrossFit competitions and the bigger bars being hoisted by competitors (300 pound snatches, 400 pound cleans, 600 pound deadlifts, 315 pound push presses, etc.) athletes will need to increase their muscle mass.

The good thing is that it doesn’t take that much added muscle to make a huge difference.

Remember, muscle moves weight, and during body weight skills your body is the weight.

The Moral of the Story
All athletes requiring strength and speed should do the right things to add more muscle and get leaner or stay lean.

No need to drop down to 5% body fat; that’s actually counterproductive. But a serious competitive athlete has no reason to be above 8-10% body fat. Period.