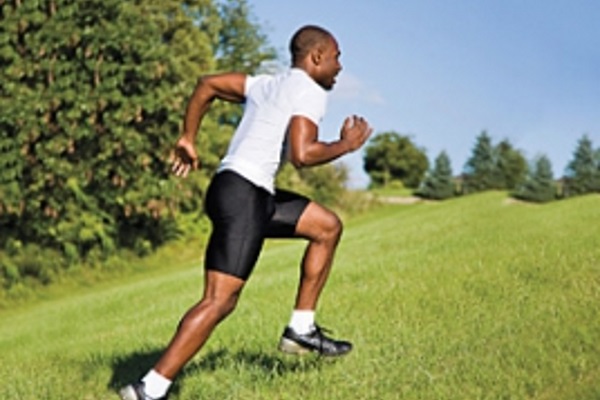 Running on flat surfaces is not the optimal way to develop your sprinting capacity. You’ll develop your explosive speed faster if you train on a hill, the Athenian sports scientist Giorgos Paradisis discovered some years ago.

In 2006 Paradisis published the results of an experiment involving 35 male students. The students in the control group [C] did no training for the 6 weeks the experiment lasted. The other students trained 3 times a week, running a distance of 80 metres 6-8 times. The students rested for 10 minutes between sprints.

Paradisis used an artificial hill for the training, shown above. To give you an idea: the test subjects in the U+D group ran from left to right and covered a total distance of 80 metres. The uphill and downhill slopes of the hill had a gradient of 3 degrees.

Paradisis suspects that the sudden transition from uphill to downhill running is the main factor in the success of the U+D training.

“During uphill running, participants experienced a resistive stimulus, followed by a normal stimulus (horizontal), and then a facilitative stimulus (downhill)”, the researcher writes. “During the first stimulus, the neuromuscular system was overloaded, whereas immediately afterward it was progressively unloaded (horizontal – downhill). It seems that this rapid transition from the first stimulus to the second, from overloaded to facilitative, benefited the neuromuscular system. The immediate transition from the overload status to the facilitated status seems to be the key factor to the training adaptation.”