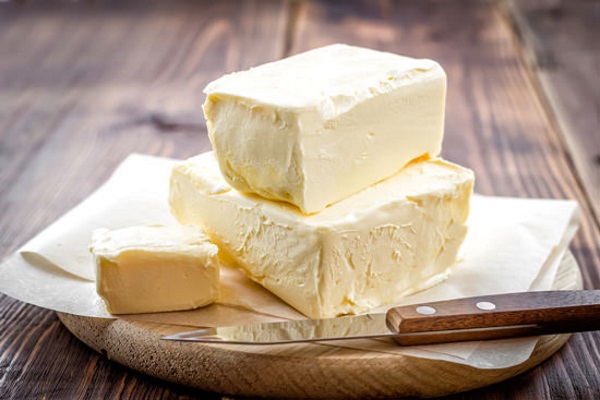 They have been shown to cause much greater weight loss than the standard “low-fat” diet, at least in the short-term (1, 2, 3).

They also lead to improvements in many health markers, such as blood triglycerides, HDL cholesterol, insulin sensitivity and others (4, 5, 6).

Despite low-carb diets being high in fat, they usually don’t cause an increase in LDL (the “bad”) cholesterol – on average (7, 8).

However, just because there is no effect seen in a large group, there is a lot of room for individual variability.

Many physicians who treat their patients with low-carb diets note that some of them develop very high LDL levels.

This involves a major increase in both LDL “cholesterol” and LDL particle number (or Apolipoprotein B). This may be a major concern, and should definitely not be ignored.

Some have claimed that this may be caused by the high butter content that is typical on a low-carb diet.

Interestingly, a common belief these days is that low-carb diets should be very high in butter, and that people should even add it to their coffee.

I used to believe that butter (especially grass-fed) was healthy and that eating plenty of it was fine. However, new evidence has made me reconsider my position.

Is Saturated Fat Bad For You?

For many decades, saturated fat has been believed to be a major driver of heart disease.

Because of this, most dietary guidelines still recommend that people reduce their saturated fat intake.

However, several recent studies have found that there really is no association between saturated fat intake and heart disease.

A recent review of randomized controlled trials also found no link. However, they did find a small reduction in cardiovascular events (but not heart attacks or death) when saturated fats were replaced with polyunsaturated fats (11).

Overall, the evidence seems pretty clear that saturated fat is not bad. Focusing on it is a waste of time, at best.

However, there’s nothing particularly “good” about it either. It is just neutral. There is certainly no scientifically valid reason to encourage people to eat a lot of it.

Bottom Line: New studies show that saturated fat does not increase the risk of heart attacks or death. It has mostly neutral effects on health.

Despite having been demonized in the past, high-fat dairy products seem to be very healthy.

Some of them, like full-fat milk, yogurt and cheese, are highly nutritious.

They are loaded with high quality protein, calcium, vitamin B12 and various other important nutrients.

There is actually no clear relationship between high-fat dairy consumption and heart disease. Some studies show an increased risk, others a decreased risk, while others show no effect whatsoever (12, 13).

This may depend on the way the dairy cows were fed. In countries where cows are largely grass-fed, consuming high-fat dairy products is linked to a reduced risk of heart disease (14, 15, 16).

The association is often very powerful, with high-fat dairy eaters having a 69% lower risk of heart disease in one study (17).

This may be caused by other beneficial nutrients that tend to be found in higher amounts in dairy products from grass-fed cows. This includes vitamin K2, CLA, omega-3 fatty acids and antioxidants (18, 19, 20, 21, 22).

But even if “high-fat dairy” as a whole is beneficial, it doesn’t mean that this applies to all the individual high-fat dairy products.

As it turns out, butter may have different effects on heart disease risk factors than the others.

Bottom Line: There is no evidence that high-fat dairy products cause heart disease. They are even linked to reduced heart disease risk in countries where cows are largely grass-fed.

Butter May be Different Than Other High-Fat Dairy Products

I used to believe that the same applied to butter as other high-fat dairy products. However, a recent study has made me reconsider my position.

This was a controlled trial that compared the effects of butter and cream on blood cholesterol levels (23).

This graph shows the effects on LDL:

This may seem strange, because the fatty acids in butter and cream are pretty much identical. Butter is just cream that has been churned.

However, the fatty acids in cream and other high-fat dairy products are enclosed by a membrane that contains proteins and phospholipids. This membrane is called the Milk Fat Globule Membrane (MFGM) (24).

The MFGM membrane seems to reduce the cholesterol-raising effects of the fatty acids in cream. When cream is churned into butter, it loses much of this membrane.

This is one perfect example of why whole foods are more than just their individual components.

In this case, the “food matrix” of butter is different than that of cream.

Because butter has less of this protective MGFM membrane, it may raise cholesterol levels significantly more than other high-fat dairy products.

Bottom Line: A new study shows that the health effects of high-fat dairy products as a whole may not apply to butter. The fats in butter are not enclosed by an MFGM membrane, and may raise cholesterol levels.

Butter and Bulletproof Coffee – Have Things Gone Too Far?

There are always some people that need to take things to extremes.

Just because saturated fat has been shown to be harmless in normal amounts, it does not mean that you should eat tons of it.

The studies were done on people using reasonable amounts of this stuff. No one knows what happens if you take massive doses that are way outside of any evolutionary context.

Humans evolved eating saturated fat, and we did just fine eating butter before.

However, now some low-carbers are advocating adding several tablespoons of the stuff to your coffee every day – not to mention adding butter to other foods on top of that.

Just because a little bit is okay, it does not mean that large amounts are better – or even safe. More is not always better in nutrition.

Given the fact that some low-carbers see skyrocketing LDL levels when they eat a diet that is ultra high in saturated fat, I do not think that such a diet should be recommended without getting tested.

Some people do fine eating this way, with no adverse effects. Others see a rapid increase in important heart disease risk factors like LDL and ApoB.

This is a major cause for concern. Anyone who says you should ignore this and that the “cholesterol theory” has been debunked is giving dangerous advice.

Bottom Line: Many low-carbers believe that saturated fat should be consumed in very high amounts, even added to coffee in large amounts. This is a bad idea.

A Mediterranean-Style Low-Carb Diet May be The Healthiest Choice

Nutrition is a rapidly developing field, and what seems true today might get debunked tomorrow.

It is absolutely crucial to be willing to change your position when there is new evidence that indicates that you may have been wrong before.

Otherwise, you’ll just get stuck in group thinking and cognitive dissonance, constantly having to ignore new findings and defend your outdated views.

I used to believe that butter was healthy, and that a low-carb diet could include lots of butter without any negative effects.

However, based on new evidence, I have had to reconsider my position somewhat.

I do not believe that butter is harmful by any means, but I do think that eating large amounts of it should be cautioned against.

There is certainly no reason to load up on it, and the ultra-high-butter, ultra-high-saturated-fat trend in the low-carb community may be doing more harm than good.

A Mediterranean-style low-carb diet, with more extra virgin olive oil instead of butter, is probably much healthier.