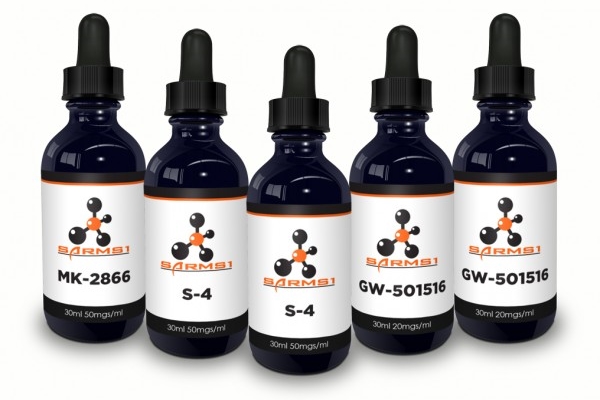 In the bodybuilding community, after the prohormone ban and further DEA shenanigans, SARMS (Selective Androgenic Receptor Modulators) became more immediately and readily available from PH manufacturers and research chemical companies online as a viable alternative to PHs and even anabolics for those who fear pinning (injecting) and the overstated legalities that comes with AAS usage.

SARMS are powerful replacements for prohormones and great for those who seek rapid physique improvements, yet there appears to be Selective Advertisement Release Mechanisms from most manufacturers unfortunately stating that SARMS are “completely safe!” which is a bold-faced lie.

As with ALL forms of anabolics and androgenic mechanisms, there is room for side-effects…however side effects are dose-dependent and based on secondary interactions with receptors in the body.

I’ll list the current popular SARMS in loose order from most potent to least:

Why is there an ordered list of potency? Well, same reason there is a list of potency for AAS leaving Halotestin and Trenbolone to be the most potent oral/injectable available.

LGD-4033 is the most potent SARM on the market, being 12x more androgenic than its cousin, Ostarine. However it’s so potent that total testosterone and free testosterone are suppressed at an extremely low amount of just one milligram!

Don’t believe me? Here’s an excerpt from an in-depth study:

Most dosing protocols end up being 5-10mg however. Can you imagine the suppression and shutdown at that dose? Similar to AAS! It took an extra 35 days for subjects to reach homeostasis and HPTA to return to normal, which means at these higher dosages, the shutdown is exponentially greater thus taking even more time to restore normal function.

Ostarine is the cousin of LGD and usually stacked together. That’s a bit of a double-dose of trouble, although Ostarine has the ability to prevent catabolism through raised cortisol (and can be used in a PCT protocol) you have to look at the overall picture. Two cousins hanging out stuffing receptors, eventually that will lead to a diminishing return causing all that circulating T to convert to estrogen through aromatase! Yeah, nobody’s told you that one I bet. I can guarantee with 100% certainty you have been told SARMS can’t cause gyno, haven’t you?

Well… I just disproved that in one fell swoop above. Of course the conversion rate is different for everyone, but after a few weeks of usage it won’t hurt to use low dose AI such as Arimidex or a suicide inhibitor like Aromasin. Rebound gyno isn’t something to worry about, you’re protecting yourself against it by taking precaution with the AIs.

That means you do have to utilize PCT after a heavy SARM cycle! You also still need cycle support as some of these can cause liver issues, so liver function must also be protected. You are being lied to once more by companies telling half-truths and hype marketing, only worrying about their bottom line over your health.

For lighter, single compound cycles, HCGenerate/ES run for a few weeks is plenty. For anything more, you still have no choice but to run Nolvadex or Clomid, depending on factors.

MK-677 (Ibutamoren) is touted as a SARM, but that’s just for ease of labeling… The reality is that it is a secretagogue for growth hormone and elevating IGF-1 — for an oral secretagogue, it’s incredible! Providing up to 12 pulses per 24 hours.

The thing is… It takes 14 days to truly kick in but when it does, IGF-1 is boosted around 36%! 50-60% by 6 weeks! Ibutamoren can actually be taken long-term, just like a commitment to injecting exogenous GH or peptides.

“MK-677-treated subjects had a 36% increase in serum IGF-I levels compared with the placebo-treated subjects, and this was associated with positive changes in nitrogen balance.

There was a modest increase in cortisol and PRL after the first dose of MK-677, as previously has been shown for this drug and GHRP-6. These increases in cortisol and PRL were within the normal range, transient, and of a magnitude comparable with normal physiological conditions, such as sleep, exercise, or mental stress.

However, even this small effect was substantially attenuated by the seventh dose of MK-677, such that no significant difference between treatments was evident by day 14. This has been previously reported.”

Wait a second…. “SARMS don’t raise cortisol… or prolactin.” Whoops! They do, but they taper down, still important to know, especially if you know you have higher than average cortisol.

RAD-140 is very new, but has crazy anabolic activity, similar to a good dose of Test. That means packing on mass quicker. It’s essentially as testosterone mimic. Though it has possible renal toxicity, this can be minimized with proper cycle support/liver support.

GW-1516 (Cardarine) is a very interesting SARM, though it’s action is much different and would qualify light PCT usage. It appears that Cardarine promotes uptake of glucose/glycogen in skeletal muscle, but utilizes fat for energy through AMP Kinase, so it’s essentially a potent nutrient partitioner. It aids to keep muscles full, but only touching fat for fuel! It has the ability to spare muscle, while promoting fat metabolism.

The retention of glucose/glycogen means huge endurance boosts. Thus it has been banned in endurance sports because it’s that good!

Finally, S-4 or Andarine. Somewhat light on sides, the biggest side-effect of S-4 is yellowing of the eyes and difficulty seeing in the dark due to M1 receptor affinity which is located in the eyes. Thus S-4 is best run 5 days on 2 days off. Excellent for cutting and retaining mass, it can actually be stacked well with GW and Osta or LGD depending on goals.

So now that you have a well-rounded rundown of popular SARMS (and more are coming out frequently) don’t let selective marketing releases lie to you, you deserve to know the facts, never the hype, in fact the hype should come from the facts! The science should get you excited, not the misinformation and crafty product copy and art to push product with buzzwords.

If you enjoyed this, you’re encouraged to share. Broscience is readily available, or you can use real science, which do you think will better your life and goals in the long run?