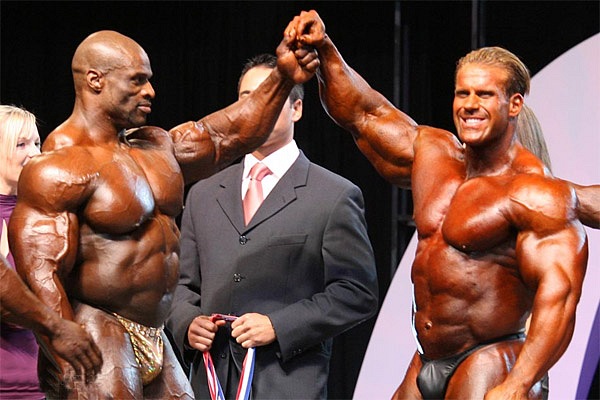 Ronnie Coleman and Jay Cutler’s epic battles established their rivalry as the greatest of the past generation. But just because these two legends share 12 Sandows between them doesn’t mean they shared the same training philosophies. Here we break down the differences (and similarities) of their training methods.

Coleman is the rare pro bodybuilder who hits each major body part twice per week, double the frequency of most champs. To get all those workouts in, he often works two body parts per session. For example, he trains biceps immediately after back. He also hits shoulders that same day. Coleman does a moderate 12-14 sets per body part.

Cutler follows a more typical once-per-week schedule for bodyparts but he makes an exception to this rule for back. Like Coleman, Cutler divides his back training into a thickness workout (mostly rows) and a width workout (mostly pulldowns and chinups), including the latter in his shoulder routine. Cutler states, “I’m a volume trainer, and I always have been.” Indeed, Cutler typically does seven or eight exercises and 20-24 working sets in his back thickness workout alone.

One area where the two Mr. Os are simpatico is reps per set. They both almost always stick to the 10-12 range for everything but calves and abs. Despite their (justified) reputations as human forklifts, they’re not using those prodigious weights for three-rep max-outs. They’re aiming for 10. Wanting to focus fully on the targeted muscle(s), Cutler professes not to count reps, but he still uses a weight during working sets that puts him in the 10-12 range, give or take a rep or two.

Neither man is concerned with executing the precise textbook form prescribed by personal trainers. In fact, Cutler claims it would sometimes be dangerous for him to do so. Instead, he uses the best form for his physique, discovered through years of trial and error. Occasionally, this may mean a little extra motion and even what others might label bad form, but he does this to better focus on the targeted area, never to make reps easier. Likewise, Coleman has discovered the motions that best emphasize his muscles, sometimes adding a little extra jerk or sway. Both champs endeavor to get a full range of motion from stretch to lockout or near-lockout for each rep.

Coleman has always had a relatively leisurely pace, even when he was pre-contest, resting for over a minute between sets, and almost always sitting or leaning on something. Between his heaviest sets of draining compound lifts, such as squats and deadlifts, he may take more than two minutes of rest. In contrast, Cutler goes relatively fast, resting for under a minute between sets, and he increased the pace pre-contest to less than 45 seconds.

Neither Cutler nor Coleman is a high-intensity adherent. That’s not to say they don’t go hard and heavy; they do. It’s also not to say they’re not fully focused on each workout; they are. Coleman famously shouts “Light weight!” before his heaviest sets of compound lifts, and Cutler stalks the gym before testing himself with a new personal best. However, they’re not concerned with pushing each working set to absolute full-rep failure, nor do they drive many sets beyond their normal boundaries with techniques like forced reps, rest-pause and descending sets. They use these types of intensifying techniques sparingly, and execute complete reps with maximum weights under control. Although straight sets make up the bulk of their routines, both perform some supersets, especially for arms, and Coleman always does trisets or giant sets for abs.

Throughout his bodybuilding career, Cutler has spent more time training alone than with a partner. Currently, due partly to his busy travel schedule, he sometimes trains with a partner and sometimes doesn’t. Even when he trades sets with someone, however, the other guy is not a T.P. in the usual sense. Cutler does his workouts his way, and if a friend wants to tag along, help change weights and spot him on his heaviest sets, he’s welcome. But Cutler is fully capable of motivating himself. Usually, he trained alone pre-contest to avoid distractions.

In the early stages of his bodybuilding career, Coleman worked out with partners, but the man who would be king eventually grew too strong for anyone to keep up with. Whether at home or on the road, he rarely trades sets with anyone.

Since he first began bodybuilding in 1990, Coleman has stuck to the same game plan of mostly free-weight basics with some standard machine exercises: pulldowns, leg curls, etc. His primary workout tools are barbells and dumbbells, and he places a great emphasis on compound basics such as deadlifts, barbell rows, squats, bench presses and military presses. “I don’t need to use any fancy machines,” Coleman avers. “The basics work best, and I want to do what works best.”

When he began training in Massachusetts in 1991, Cutler also built his routines around the pile-on-the-plates standards, and, like most of us, it was during his initial years in the gym that he made his best gains. However, he began to do more and more mechanical exercises — to stave off injuries and for greater “refinements.” Later in his career he returned to basic training, focusing his routines on the heavy barbell and dumbbell fundamentals. “I give credit to Ronnie,” Cutler admits. “He’s always trained this way. I got away from it for a while, but when I went back to doing the heavy barbell and dumbbell work again, I developed a fuller, denser look all around.”

Because both champs rely on meat-and-potatoes standards, there aren’t many opportunities for variety. After all, there aren’t equivalent substitutes for exercises like deadlifts or walking lunges. Coleman sometimes has to make concessions when on the road, but otherwise, he doesn’t change his routine. That said, variety is factored into his regimen because he executes two distinct workouts for the same bodypart each week. For example, he’ll do barbell, incline and decline presses in one chest workout, and do the same exercises with dumbbells in the next workout — and, again, one weekly back workout targets thickness and the other targets width. He never does the same workout twice in a row, but he does do the same exercises (split into two workouts) week after week, without changing.

Cutler will sometimes make minor modifications from workout to workout, changing the exercise order or adding or subtracting a lift, decisions that are somewhat dependent on the gym equipment available. Still, he too keeps to the same proven script. Like Coleman, he’s found the exercises that work best for him — mostly the compound standards — so he sticks to them rather than continuously substituting less effective lifts. Doing something different isn’t a good enough reason for not doing what works best. – FLEX