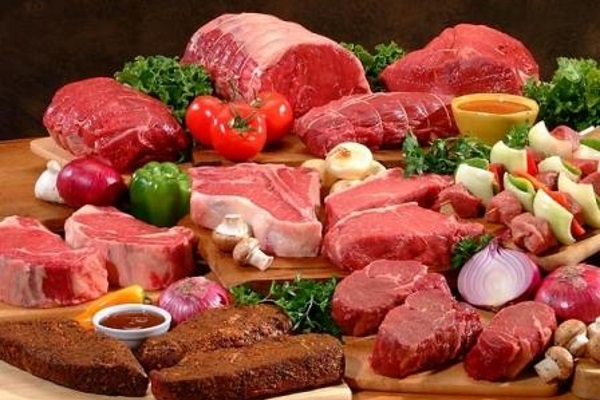 Consumption of red meat has been associated with fat gain (and weight gain) because of its high fat / calorie content. Even though the old idea that “a high fat intake causes body fat gain” has been completely debunked in medical research [1-9], red meat still is a food that’s on the forbidden or avoid list in most diet plans. And for some reason, women tend to be especially afraid of eating meat…

While there are studies showing an association between meat intake and obesity [10-12], there are also studies not showing this [12-14]. And when digging deeper in the data, many of the studies that did report a significant association with meat intake and fat gain / obesity have several flaws that invalidate their conclusions….

One of the latest and largest studies to date on the topic of red meat intake and weight gain (which is a surrogate measure for fat gain in epidemiological studies), concluded [15]:

“Total meat consumption was positively associated with weight gain in men and women, in normal-weight and overweight subjects, and in smokers and nonsmokers. With adjustment for estimated energy intake, meat intake of 250 g/d (e.g. one steak at approximately 450 kcal) would lead to a 2 kg higher weight gain after 5 years compared to the same diet with less meat. Positive associations were observed for red meat, poultry, and processed meat”.

This is a pretty bold statement! However a closer look at the study methodology and data reveals major weaknesses:

First; usual dietary intake was assessed only at baseline and not during the subsequent years. It is well recognized that peoples’ food habits often change over time. And it doesn’t take a rocket scientist to understand that in order to track changes over time, at least two measurements are required. And the baseline food intake assessment was done with questionnaires, which are infamous for being inaccurate [16-18]. Using a methodology that begs the question “how bad is good enough” will obviously not provide very reliable data [17].

Second; in several centers, participants who consumed more meat actually had less weight gain, whereas those with lower meat consumption had higher weight gain. Despite this, and despite the very large number of participants (about 103,000 men and 270,000 women), the researchers behind this study lumped them all together in the statistical analysis. Also, the assessment of physical activity, which is strongly related to food habits [19], was done via self-administered questionnaires, which do not accurately reflect objective physical activity or fitness data [20, 21]. Therefore, the adjustment for a possible influence of physical activity on the observed weight change in this study doesn’t strengthen its conclusions.

Third; the researchers reported an effect based on a combination of meat sources, but their sub-group analyses indicate that after exclusion of participants with chronic diseases and those likely to misreport energy intake at baseline, the following was found:

This indicates that processing, or factors associated with consumption of processed foods, are involved in the reported detrimental association between meat intake and weight gain, rather than meat per see.

Fourth; and probably the most important shortcoming is that the observed weight changes may be due to changes in either lean body tissue or fat mass or both [22]. Meat is a high-quality source of protein for building and maintaining lean body mass. Consequently, the noted association between meat intake and weight change may partly be due to gain of lean body mass in participants with high meat intake. It is well known that dietary protein plays a major role in developing and maintaining lean tissue mass in the body during growth in infancy, through adulthood while dieting, and particularly in preventing loss of lean body tissue and sarcopenia in elderly individuals over 50 years of age [23]. The loss of lean body mass is a particular problem in individuals over 60 years of age. In older people, a higher intake of high quality protein, such a red meat, helps to prevent loss of lean body tissue, resulting in better muscle strength, bone density, and physical functioning [24]. Thus, it is interesting that the association between meat intake and weight gain was stronger in participants that were over 45 years of age. An alternative interpretation of this finding is that the weight gain seen with higher intakes of red meat is not fat gain, but lean mass gain. This interpretation of the results is congruent with other studies showing that an increase in protein intake from meat and other sources prevents body fat gain [25, 26], enhances diet induced fat loss [27-30], and help with body weight (fat) control [26, 31].

Thus, studies that don’t measure body composition don’t tell anything about the role of meat for body fat control. Because of all these methodological flaws, the conclusion that “a decrease in meat consumption is recommended for body weight management and improvement of health” is totally misleading!

In a long-term study, two groups of subjects (including both men and women) were instructed to eat 170 g (6 oz) of lean red meat or white meat per day, 5 to 7 days per week [32]. This dietary change resulted in the following differences among the two groups:

This study, in contrast to the misleading one above, was well conducted and used detailed food log records, which is the gold standard tool for estimating dietary intakes [18, 36]. Thus, because a food contains more fat (and calories) doesn’t necessarily have to mean it will cause fat gain. 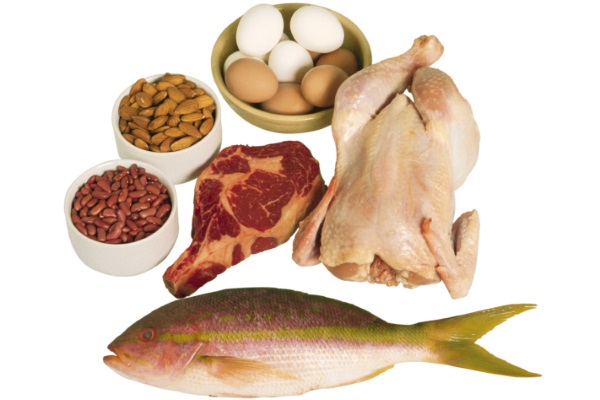 Another study compared intake of beef with that of lean fish and poultry [37]. Three groups of male subjects each rotated in a crossover design through 3 experimental periods that lasted 26 d each. All the diets were planned to provide 2,800 calories per day, of which 18% came from protein, 53% from carbohydrate, and 30% from fat (polyunsaturated-to-monounsaturated-to-saturated fatty acid ratio: 1.0 : 1.1 : 1.0; 268 mg cholesterol/day; and 29 g fiber/day).

The 3 experimental diets had no differences in food composition with the exception of the protein source tested, which was:

69% of daily proteins came from beef, fish, or poultry, and the remaining was from vegetable sources. This corresponded to about 400-500 g of the respective protein foods.

Body weight was measured every 2 days. Subjects were informed that they had to avoid alcohol consumption and that they should maintain the same activity level throughout the study. They were also asked to consume nothing besides the prepared meals they were given by the food lab. It was found that none of the experimental periods resulted in any body weight differences [37]. That is, on iso-caloric diets (i.e. constant energy intake), the protein source does not affect body weight, meaning that there is nothing inherently bad with red meat for weight control, which is a common misperception. This is supported by other studies [38, 39].

There are conflicting recommendations regarding the appropriateness of red meat versus white meat consumption as part of fat loss diets. An interesting study examined changes in body weight in overweight women who followed an energy restricted diet (500 calories per day less than usual) with lean beef or chicken as the primary protein source, while participating in a fitness walking program. Body weight, body composition (by hydrodensitometry), were measured at baseline and after 12 wk.

The results showed a significant weight loss that was similar between the beef group and the chicken group. Both groups showed significant reductions in body fat percentage, with no significant differences between groups. This study demonstrates that weight loss and fat loss can successfully be accomplished through diet and exercise, regardless of whether the dietary protein source is lean beef or chicken [40].

Well conducted studies show that red meat can be included in effective fat loss diets, and that there is nothing inherently “bad” with red meat that would cause it to interfere in body fat loss or maintenance. And hey girls, this applies to you as well!

“But doesn’t red meat cause heart disease, diabetes and cancer?” you may be thinking. I covered this in depth in a previous article “Red Meat and Health – have we been blaming the wrong thing?”

As outlined in that article; as long as you don’t overcook your steak, stay away from processed meats, eat your daily veggies, and adjust your carb intake to your physical activity level, you don’t have to fear that your meat intake will harm your health. And now you also know you can enjoy your steak without having to worry it would detrimentally impact your fat loss efforts.

This rounds up meat from all angles – health, fat loss and muscle growth