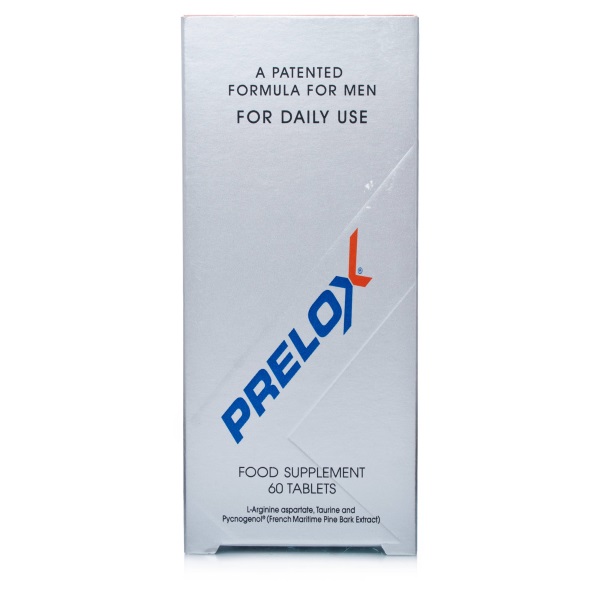 We recently wrote about a Japanese sex supplement that has a modest effect. The sex supplement we’re talking about today works more than a little bit. It’s called Prelox and is manufactured by Horphag Research in Great Britain. It contains the same ingredients as the Japanese product – but in higher concentrations.

Prelox
A Prelox capsule contains 20 mg Pycnogenol and 700 mg L-arginine-aspartate, a pretty smart combination. Pycnogenol stimulates the enzyme nitric oxide synthase. [J Cardiovasc Pharmacol. 1998 Oct; 32(4): 509-15.] [Hypertens Res. 2007 Sep; 30(9): 775-80.] This enzyme releases nitrogen monoxide from L-arginine, and NO is essential for an erection. So if you put Pycnogenol and L-arginine together, in theory you have an erectogenic duo that works synergetically. And studies show that it works in practice too.

Study
The Japanese researchers whose work we described a few weeks ago gave their test subjects 700 mg L-arginine and 60 mg Pycnogenol every day. The researchers at Gabriele D’Annunzio University, who tested Prelox on 124 men aged between 35 and 50, and with mild erection problems, worked with more generous doses. The subjects in their experimental group were given 4 Prelox capsules daily – with a total of 80 mg Pycnogenol and 2800 mg L-arginine-aspartate. The subjects in the control group were given capsules without active ingredients.

Results
The men divided their pill intake over the day, taking two capsules at breakfast and two with their evening meal. At the start of the experiment, and after three and six months, the researchers gave the subjects a questionnaire on their sexual functioning to complete. The graph below shows that the total score in the experimental group almost reached the maximum score of 30 as the experiment progressed.

The tables below show the scores for the individual questions. The supplement had a positive effect on all aspects that the men were questioned about.

There were no negative effects on the men’s health. Their blood pressure dropped slightly and their testosterone level rose. At the start of the experiment the testosterone level of the men in the experimental group was 15.9 nanomoles; after six months the level was 18.9 nanomoles. That’s a rise of 19 percent. The researchers put this down to the fact that, because their sexual functioning had improved, the men thought more often about sex and this boosted their testosterone production.

It’s also interesting that over a period of six months the supplement’s effectiveness didn’t decline, but actually increased. There was therefore no ‘pharmacological tachyphylaxis’ as scientists call it. For a product that is largely composed of arginine, that’s exceptional. Arginine usually only have a temporary effect. The combination with Pycnogenol seems to blocks the feedback mechanisms which eventually arginine looses its effectiveness.

Sponsor
The research was funded by Horphag Research.