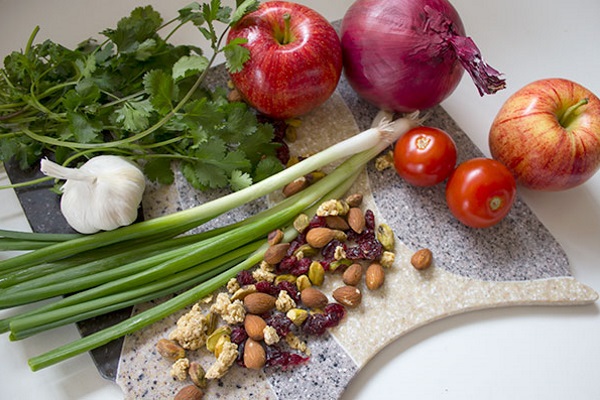 A diet rich in flavonoids, or quercetin analogues, causes your body to make less of the muscle-destroying hormone cortisol after it has been exposed to psychological stress. Japanese researchers suspected this to be the case, and did tests on rats.

The adrenals make cortisol, an annoying hormone that converts muscle proteins into sugar. When our forefathers were still roaming the prairies and often had to flee hungry sable-toothed tigers or woolly mammoths in a bad mood, cortisol was no doubt extremely useful. These times have passed.
The adrenals manufacture cortisol when the pituitary gland in your brain produces ACTH. And the pituitary only starts to do this when the hypothalamus, another gland in the brain, produces the hormone CRF. Physical or psychological stress stimulates the hypothalamus to start making CRF. The first daylight has the same effect. That’s why your cortisol level rises as the new day dawns.

The researchers caused major stress in their rat subjects by throwing them into water. The animals were submerged, with just their heads kept above water. Water Immersion Restraint is the name given to this practice. [WIR] After subjecting the rats to three hours of this, the researchers took them out of the aquarium and examined them.

Half an hour before throwing them in the water the Japanese had given the rats a single oral dose of quercetin. The dose varied from 10 to 50 mg of quercetin per kilogram bodyweight. [Human equivalent: 120 to 600 mg.] The figures below show the effect of the different doses on the concentration of cortisol and ACTH in the rats.

When the researchers examined the rats’ brains, they saw that the single dose of quercetin had inhibited the release of CRF. The figure below shows the effect of the 50 mg dose. The researchers varied the amount of time the rats had to tread water.

Although the researchers used a high dose, they think that it’s possible to benefit from this mechanism through diet as well. One hundred grams of onion can contain as much as 40 mg of quercetin. Other sources of quercetin are green tea, apples and broccoli. A supplement that contains a lot of quercetin is St John’s Wort.

The researchers suspect that dietary quercetin, and its metabolites, accumulate in the brain. In the long term it’s possible to achieve concentrations that are similar to the concentrations that the researchers got by giving a single mega-dose in their experiment. A diet rich in quercetin analogues might therefore in the long run lead to a reduction in the manufacture of stress-induced cortisol.