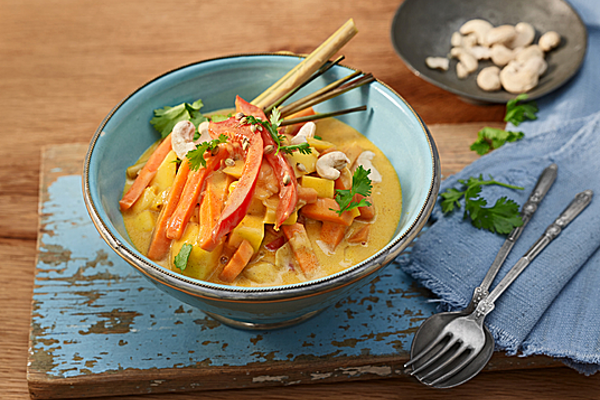 I know that I will probably have annoyed some of you by implicitly calling “paleo” non-scientific. If we are honest, though, the whole paleo concept is based on extrapolating data from modern hunter gatherer populations, infusing them with a minimal amount of real evidence of what our ancestors ate and mixing that with the intrinsically flawed assumption that the way our ancestors ate (which was 100% opportunistic and 0% “optimized”) was the optimal way for us to eat… and no, I am not going to apologize for what some of you may consider an assault on respected scientists who have published more than a dozen of papers which constitute the theoretical backbone of an experimentally still mostly unverified, but promising approach to “healthy dieting”.

Just to make sure there’s no confusion. I am not saying that everything that Eaton, Cordain and others wrote is bogus. I am just saying that their papers are above everything else the material based on which others have formulated research hypothesis and done experimental research. Research that has been reviewed in a soon-to-be-published paper in the influential American Journal of Clinical Nutrition, by Eric W Manheimer, Esther J van Zuuren, Zbys Fedorowicz, and Hanno Pijl. A paper that leaves its readers with a generally positive conclusion, but state that “[t]he available data warrant additional evaluations of the health benefits of Paleolithic nutrition” (Manheimer. 2015). Now that does not sound like much, but in view of the scarcity of evidence it is more than you’d usually expect from a review that was partly financed by the National Center for Complementary and Alternative Medicine of the US.

When they decided on the methodology, inclusion and exclusion criteria, Manheimer et al. began with the simple, but important question “Does paleo-nutrition improve risk factors for chronic disease more than other dietary interventions in people with the metabolic syndrome?” To answer this question, the authors searched the following bibliographic databases for reports of controlled trials without any language restriction (likewise included were relevant results from the following ongoing trials databases): 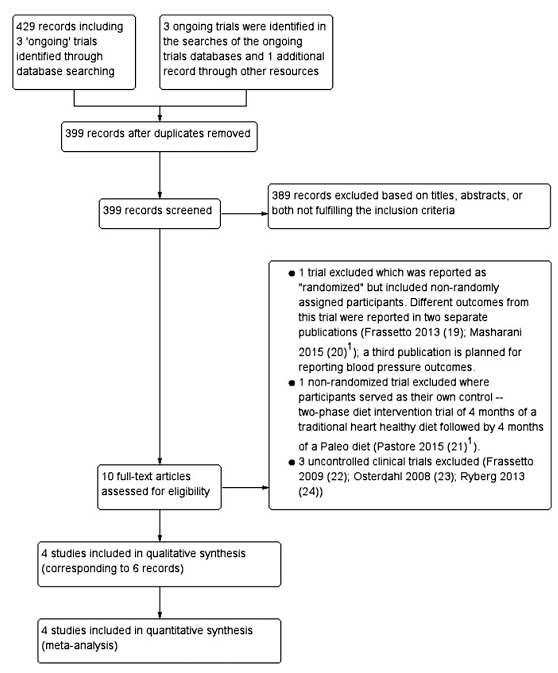 The reference lists of all identified RCTs and key review articles were also reviewed and squared with the following selection criteria:
“Randomised controlled trials will be included. Any other study design will be excluded. We will only include cross-over trials if we are able to extract the relevant data from the first phase (i.e., before the crossover occurred) because we consider the risk for carryover effects to be prohibitive” (Manheimer. 2015).

In addition, the scientists looked for dietary interventions which were designed to emulate as much as possible, for the modern time, the diet of plants and animals eaten by human beings during the Paleolithic era. More precisely, Manheimer et al. included only studies with diets with…

To make sure to get relevant data, the duration of the dietary intervention had to be at least one week. Studies showing only acute improvement in blood pressure, glucose levels or whatever from eating more veggies and fruit and calling that “the paleo diet” were thus not included in the meta-analysis. The same goes for two uncontrolled clinical trials, as well as all studies where the dietary protocols included one or several of the following “paleo-nono-foods”: dairy, grain-based foods, legumes, extra sugar, nutritional products of industry (including refined fats, refined carbohydrates).

This is the macronutrient composition (in g/day) of what Eaton describes as the “paleo diet” in his 1985 seminal paper – needless to say that this is based solely on hypothetical extrapolations of sample data from modern hunter gatherer populations and the little actual evidence we have of what our ancestors ate (Eaton. 1985).
So what’s paleo, and what was it compared to? For those who are too lazy to read the full article, here’s the gist. The “paleo diets in the four RCTs that were analyzed in Manheimer’s meta-analysis used diets that were high in vegetables (including root vegetables), fruits (including “fruit oils”, i.e. olive oil, palm oil, coconut oil) and nus, fish, meat and eggs. Dairy, grains, legumes, extra-sugar and processed foods were a no-go in all studies Manheimer et al. included in their analysis. The control diets in all 4 RCTs that were concluded in the meta-analysis were based on distinct national nutrition guidelines, but still broadly similar. Obviously that’s interesting, because the results of this meta-analysis are thus going to be a comparison of the “paleo diet” and the recommended “healthy diet” according to what experts on certain advisory boards think would be the one and only way for us to eat.

Important side note: I would like to use the chance to highlight that this diet – if it was not for the (imho) unnecessarily rigid exclusion of dairy and legumes – is actually very similar to what fitness experts have been suggesting for decades. If you do the math on the macros in Eaton’s recommendation you end up with 32.5% protein, 22.8% fat, 43.7% carbohydrates and the rest of the energy in form of fiber. With this common macro ratio from the fitness community and the requirement to “get all of that from whole foods” you end up eating almost the same diet.

The number of studies all these search efforts brought to light was – as you, as someone who’s heard about all the pertinent trials on www.facebook.com/SuppVersity, already, will know – not exactly extensive. All in all, only four RCTs that involved 159 participants were included. This were four RCTs with very similar results, as the researchers’ meta-analysis revealed:

“In this systematic review and meta-analysis of 4 RCTs, Paleolithic nutrition resulted in greater short-term pooled improvements on each of the 5 components of the metabolic syndrome than did currently recommended guideline-based control diets. However, the greater pooled improvements did not reach significance for 2 of the 5 components (i.e., HDL cholesterol and fasting blood sugar). For each metabolic syndrome component, the quality of the evidence for the pooled estimate for improvement was moderate” (Manheimer. 2015).

I guess what these results mean is much easier to grasp if you take a look at the plot of the data I’ve created for you. Keep in mind: What you see in Figure 1 are the differences compared to the allegedly “optimal” recommended diets in the respective studies, not differences to the habitual diets of the subjects which were probably significantly more pronounced.

The most significant and probably practically relevant benefits of the paleo diet can be seen in the graph on the right hand side: Compared to the relatively small (and practically probably almost irrelevant, if not already stat. non-significant) advantages in terms of blood lipids and glucose, the improvements in blood pressure and waist circumferences are what I would use to argue in favor of paleo-esque dietary recommendations in front of any expert panel.

Meat vs. beans – what’s more satiating? A recent study from the University of Minnesota did a “paleo-relevant” comparison of the satiety effects of meat- and bean-based meals. More specifically, Bonnema and her colleagues compared the satiety response to a beef meal providing 26 g of protein and 3 g of fiber to a bean meal providing 17 g of protein and 12 g of fiber. What they found may surprise the non-paleo-lovers out there: “[The] beef-based meal with high protein and [the] bean-based meal with moderate protein and high fiber produced similar satiety, while the bean-based meal resulting in higher, yet moderate, gas and bloating” (Bonnema. 2015). Since both lead to a reduced energy intake on subsequent meals, both the anti-paleo legume-based and the paleo meat-based meal “could equate to weight loss and/or management over time” (ibid.).

After all, more than 50 million people in the US alone are suffering from full-blown hypertension (high blood pressure). In view of the fact that even pre-hypertension is associated with an 80% increased risk of cardiovascular morbidity (learn more), the consumption of a paleo-esque diet could thus save the lives of millions of people. In view of the fact that this would also save us billions of dollars that are spent on managing hypertension every year, this is probably the strongest argument in favor of the “paleo diet” (Note: It’s not an exclusive advantage, though. The DASH diet with a similar if not higher vegetable and fruit content has similar effects).

Figure 3: Increase in all-cause mortality risk among 48 500 men and 56 343 women, 50 years or older, in the Cancer Prevention Study II Nutrition Cohort according to BMI and waist circumference (Jacobs. 2010).

A bit less convincing for the average panel member, but practically as relevant are the significant decreases in waist circumference. With studies showing a 2-fold elevated all-cause mortality risk in average American men and women with WC ≥120 cm (compared with <90 cm) and WC ≥110 cm (compared with <75 cm), respectively (see Figure 3 for details), there’s yet little doubt that an improvement in this often overlooked health-marker is just as important as the reduction in blood pressure.

Bottom line: Even though we have to rely exclusively on the evidence of the four studies (Lindeberg. 2007; Jönsson. 2009; Boers. 2014; Mellberg. 2014), there’s little doubt that paleo-esque diets are superior to many of the recommended “low fat + whole grain, …”-diets. Unfortunately, the number of pertinent studies is small and the existing studies have short-comings the critics will always bring up as an objection when someone dares questioning the current recommendations:

These issues, as well as the short the duration of three out of the four existing studies (only the Mellberg study lasted 2 years) are problems the “paleo research” will still have to overcome before any of the governing bodies / councils will say “paleo is the new recommended diet for XY” (insert “the average citizen of the European Union”, “the average US citizen”, etc. for XY).

In view of the fact that the analysis of secondary outcomes, like body weight development [subjects on paleo lost 2.69 (0.52-4.87) kg more], inflammation [subjects on paleo reduced their CRPs by 0.28 (0.21-0.76) mg/L more], fasting insulin [subjects on paleo had 13.03 (6.52-32.59) pmol/L lower levels], and total cholesterol [subjects on paleo had 0.24 (0.09- 0.56) mmol/L levels], yielded similar “pro-paleo” results, I personally think that it is very unlikely that future trials that avoid these problems would find very fundamentally different results and/or ill health effects of a liberal paleo-esque dietary template.

The fact that longer-term studies that account for baseline differences, measure adverse events and assess the quality of life of their subjects are not available, yet, is still holding “paleo” back from greater acceptance within the medical / research community. Plus: What I would like to see are studies that compare the different paleo varieties, as in “strict paleo” vs. “paleo + dairy” or “paleo + legumes”… but who knows, maybe someone is already working on one or several of these studies at the very moment today’s SuppVersity article is published. | Comment on Facebook!