In view of the WHO’s recent epidemiological bogus publication, … ah I mean their review of the epidemiological research that said that “red meat kills”, it is quite surprising that the study Il-Young Kim and colleagues conducted in healthy young adults was even approved by the ethics committee of their respective research institutions. After all, the study involved measuring the whole body protein kinetics of young men and women after the consumption of ~40g (moderate protein, or MP) or, even “worse”, ~70g (higher protein, HP) of protein in form of red meat (85% lean ground beef) in a regular food matrix (=as part of a normal meal | see Table 1 for an exact overview of the macronutrient content).

Whole protein kinetics? Yes, that’s different from what you see in the average “whey protein builds muscle study”, in which the researchers measure only the fractional protein synthesis. Kim et al. went one step further and measured the protein synthesis (PS), breakdown (PB), and net balance (NB) in their subjects, twenty-three healthy subjects [18 – 40 yrs] who were recruited from the Little Rock area using local newspaper advertisements and flyers posted around the University of Arkansas for Medical Sciences (UAMS) campus and the Little Rock area. Now, it’s not like humans had a display you can use to read these variables, so eventually, they were still calculated based on the determinations of the rate of appearance (Ra) into the plasma of phenylalanine and tyrosine, and the fractional Ra of endogenous tyrosine converted from phenylalanine as in a previous study by the same team of researchers (Kim. 2015a). Since this technique is unable to distinguish between the different sites of protein breakdown.and storage, the results of the study at hand could describe increases or decreases in splachnic (=organ) protein synthesis or breakdown, too. It is thus not possible to exclude a null effect on skeletal muscle protein synthesis and breakdown based on the available data.

Whole protein kinetics, two different amounts of protein, with and without exercise

There were yet other things Kim’s study had in common with many of the aforementioned “whey protein studies”: The study had a run-in that was included to minimize any potential effects of the protein content of the subjects’ baseline diets. The subjects ate their high or medium protein meals in the fasted state and the participants – or at least some of them – also trained. To be more specific, the subjects were randomly assigned into an exercise group (X, n=12) protocol consisting of 3 sets of 10 repetitions of bench press, lateralis pull-down, leg press, and leg extension each at 80% of 1 repetition maximum (1 RM, the maximum weight that can be lifted for one repetition) at a pace of 30 sec per set (rest interval between sets was less than 2 min, and the entire exercise bout was completed in ~45 – 50 min), or a resting group (R, n=11).

Table 1: Overview of the macronutrient intake during the 4-day run-in and the actual experiment (Kim. 2015b)

So much for the study design. Let’s take a look at the results now: When the scientists analyzed the data from the 7-h stable isotope tracer infusion protocol that was used to determine the rate of protein synthesis (PS), breakdown (PB) and net protein balance (NP), they realized that…

Boring? You’re right. This would hardly be a ‘SuppVersity newsworthy’ study if the researchers had not also confirmed what most of you probably already suspected: The high protein meal lead to a significantly greater increase in net protein balance than the medium protein meal. 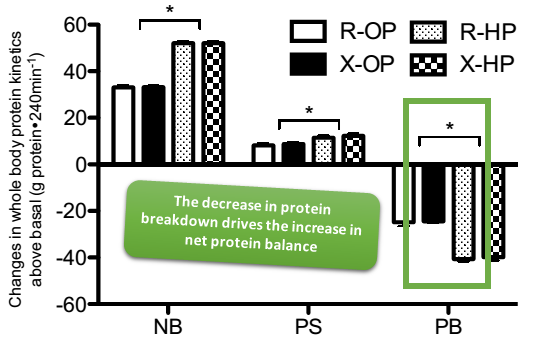 Interestingly enough, this increase in net protein balance was achieved primarily through a greater reduction in PB and to a lesser extent stimulation of protein synthesis (for all, p<0.0001). This is an important results, because it suggests that all previously reported ceiling effects for protein synthesis could be irrelevant when we are talking about a potential limit of protein intake beyond which you won’t be able to see further beneficial effects on body composition in general and the accrual of lean mas in particular. 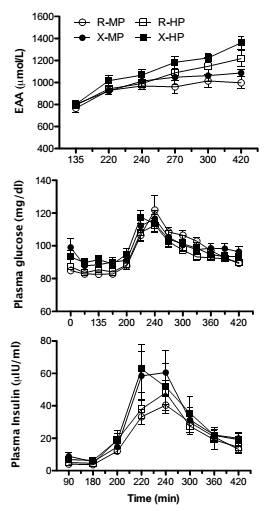 Figure 2: The analysis of the inter-group differences in EAAs, glucose and insulin suggest that the difference is meadiated mainly by the increase in serum EAAs and not a “side effect” of increased, highly anticatabolic (Fukagawa. 1985) insulin.

Bottom line: When it comes to interpreting the results, two things are important. Firstly, it is worth mentioning that the previously described decrease in protein breakdown was achieved in response to a greater increase in plasma EAAs (p<0.01) – not in response to increased insulin levels (inter-group differences were non-significant over time). That’s important because it means that you wouldn’t see the same effect by simply adding more insulinogenic carbs to the meal in order to increase the levels of one of the most powerful inhibitors of protein breakdown: insulin (Fukagawa. 1985)!

Sounds great, right? More helps more! True, there’s yet (a) the previously hinted at problem that we can’t tell if what the scientists measured was muscle or splachnic protein. Furthermore, the results of the study are (b) valid only if the protein comes from slow-digesting meat. From previous research, I discussed in detail back in 2013, already, we know that the ingestion of similarly high amounts of fast digesting proteins, like whey, does not inhibit, but rather trigger an increase in protein breakdown and gluconeogenesis that uses the ingested protein as a substrate. Now, that doesn’t mean that using too much whey protein will cost you muscle mass. What it does mean, though, is that you’ll be “Protein Wheysting” if you mistakenly believe that the results of Kim’s study apply with a very slow digesting protein source apply turbo-proteins, as well.

So what’s the verdict? Don’t economize on protein, but don’t fool yourself to believe that with protein more is always always better. Maybe I should also remind you that when you’re dieting a high protein intake can yield better results than a very high one and that’s a conclusion from a metabolic ward study | Tell me and others what you think on Facebook!