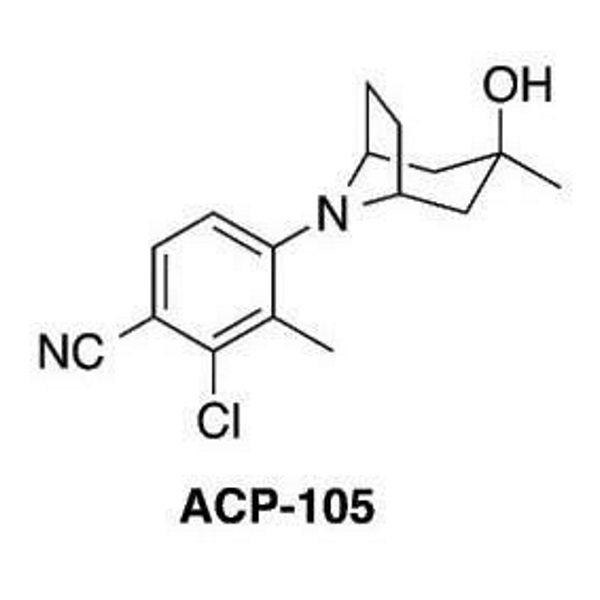 SARMs such as S4, MK-2866, LGD-4033, YK11 and RAD140 are familiar names in the chemical sports world, and no doubt there are many more on the horizon. There are three that we, the naive compilers of this free webzine, suspect might just turn up in webstores or your favourite dealer’s catalogue. May we introduce you to LG121071, ACP-105 and LGD-3303?

LG121071
Just to make things clear: LG121071, developed by Ligand Pharmaceuticals, is still difficult for athletes to get hold of, but doping hunters at the German Sport University Cologne have already developed a doping test for it for WADA. [Eur J Mass Spectrom (Chichester, Eng). 2015;21(1):27-36.] At the time of writing the test had not yet been introduced, but by the time you read this, the situation may have changed.

In the table below 1b is DHT, 2 is fluoxymesterone [the active substance in Halotestin] and 8 is LG121071.

LG121071 works when taken orally, but daily doses of several tens of milligrams are probably needed for humans. We have not come across studies that describe the effects of LG121071 on muscles and the prostate, but there are likely to be effects. The elite doping hunters at WADA are not developing the doping test for nothing of course.

ACP-105
ACP-105 is produced in the laboratories of the Swedish company Acadia Pharmaceuticals. As far as we know, ACP-105 is not yet available in online stores where chemical athletes do their shopping, and a doping test has already been developed for it. [Eur J Mass Spectrom (Chichester, Eng). 2014;20(1):73-83.]

ACP-105 was first mentioned in the scientific literature in 2009. [J Med Chem. 2009 Nov 26;52(22):7186-91.] This study showed that a relatively low concentration of ACP-105 attaches itself to the androgen receptor better than DHT does. In the figures below, taken from the publication we just mentioned, 1 represents ACP-105.

ACP-105 can be taken orally and may be an effective SARM, according to the results of an animal study that the researchers performed. “The principal finding from this study was that 1 [ACP-105] produced a robust anabolic effect on the levator ani muscle (67% reversal of ORX-induced atrophy at 1 (mg/kg)/day) while having lesser androgenic effects on prostate (21% reversal; T, 48%)”, they wrote.

The human equivalent of the dosage mentioned, for a man weighing 80 kg, would be about 11 mg per day.

LGD-3303 is not yet available on the market, and as far as we know no doping test has been developed for it yet either. And that’s kind of strange. For the other SARMS we are pestering you about in this post, tests have already been developed whereas, on paper, this particular SARM is head and shoulders above the other substances.

The solid black line represents the size of the prostate, the size of the levator ani and the concentration of LH in intact animals. The vertical bars represent the same values in castrated animals.

In terms of muscle mass, a dose of 1 mg per kg per day of LGD-3303 was sufficient to completely replace the natural testosterone production. The human equivalent of this dose, for a man weighing 80 kg, would be about 11 mg per day.

An animal study published in Endocrinology by researchers at the University of Arizona also suggests that LGD-3303 has a prosexual effect, and that it heightens sexual interest in female rats. [Endocrinology. 2010 Jun;151(6):2659-68.] “These data support the concept that LGD-3303 can stimulate aspects of female sexual behavior and may serve as a potential therapeutic for women with sexual desire disorders”, the researchers wrote.