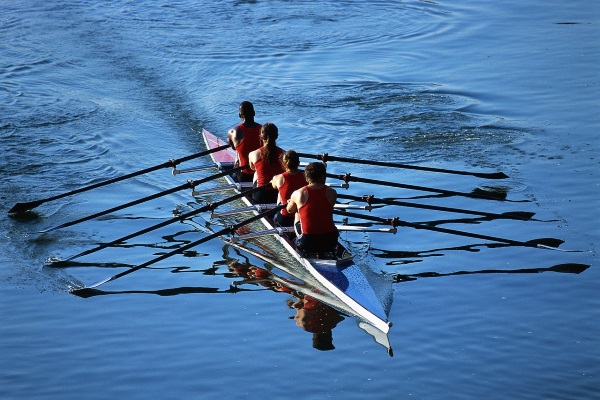 The amino acid leucine is not just of interest to strength athletes looking to build muscle and lose fat at the same time. Leucine is also interesting for performance athletes. Sports scientists at the James Cook University in Australia published in 2006 the results of a study in which rowers performed better when they took leucine capsules.

Study
The researchers gave 13 rowers – 10 women and 3 men – capsules containing leucine every day for 6 weeks. The daily dose was 45 mg/kg bodyweight. An imaginary rower weighing 80 kg would therefore ingest 3.6 g leucine a day. The test subjects decided themselves when they would take their leucine capsules.

During another 6-week period the rowers took a placebo.

Results
At the end of the supplementation period the researchers got the rowers to perform maximally for 10 seconds on a standing ergometer – a machine which allows the researchers to test the endurance capacity of the muscles in the upper body.

When the rowers had taken leucine they were capable of developing more power during the short maximal exertion. Leucine supplementation also raised the amount of exertion, but the effect was not statistically significant.

The researchers also did another test with the rowers, in which they got them to row at 75 percent of their maximal aerobic capacity. They then measured the amount of time that the subjects could maintain this speed. The figure above shows that leucine supplementation improved the time.

The tryptophan theory
The researchers had the tryptophan theory at the back of their mind when they set up this experiment. This theory states that during exertion – and also after consuming large quantities of insulin-boosting carbs – the muscles draw all amino acids out of the blood. Except for one: tryptophan. Muscles absorb very little tryptophan from the blood.

The tryptophan molecules that remain in the bloodstream have a greater likelihood of ending up in the brain. On arrival there enzymes convert them into the sleep-inducing hormone melatonin. It doesn’t take a genius to work out that athletes don’t perform well if they are sleepy.

The researchers did not find proof of this theory. The effects of the supplement had too little effect on the amino acids in the blood to explain the improvement in performance.