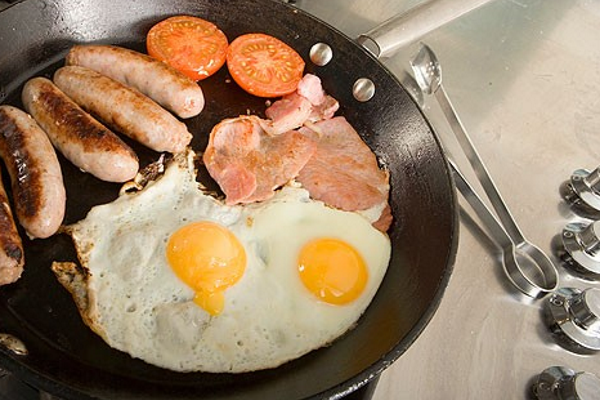 I don’t know what exactly was in the ketogenic rodent chow that was used in the study at hand, but I doubt it were transfat laden sausages 😉
Welcome to the fourth issue of the SuppVersity ISSN ’15 Research Review… as you will notice I am trying to make the introductions shorter and shorter with each installment of this series. So, let’s not waste time and dig right into the latest research on ketogenic diets.

Yes, you heard me right. There is new research on ketogenic diets that does not focus on weight loss, the obese and/or cancer. Rather than that, the studies discussed in this installment of the ISSN ’15 Research Review deal with the effects of ketogenic diets on the skeletal muscle anabolic response to resistance exercise, as well as its effects on weigh gain in an ad-libitum diet scenario.

You can build muscle on a ketogenic diet – theoretically — While previous studies on low carbohydrate diets have already demonstrated that eating tons of fat and almost no carbohydrates can trigger improvements in body composition, it is still not clear whether the consumption of virtually carbohydrate-free diets may impair the resistance training induced anabolic response in skeletal muscle. In a previous ISSN article, for example, Paoli et al. )2012) state that their observations in gymnasts on ketogenic diets confirms that

In their latest study, researchers from the University of Tampa tried to get to the bottom of this myth by looking at the degree of muscle protein synthesis (MPS) in rodents on carbohydrate-rich Western and low-carbohydrate “ketogenic” diets (see Figure 1 for the exact macronutrient ratios).

In week seven and thus after six weeks on the respective diets, the right-leg plantarflexor muscles of the researchers’ “subjects”, male Sprague-Dawley, were acutely exercised under isoflurane anesthesia by the means of high-frequency electrical stimulations (4 sets of 8 repetitions with 2 min recovery between sets). 90, 180 and 270 minutes after this highly controlled exercise stimulus a group of 8 rodents, each, was sacrificed and the levels of a previously injected tracer (intraperitoneal puromycin) were used as a marker for skeletal muscle protein synthesis (MPS).

Figure 2: While the absolute figures have not yet been published, I can already tell you that – statistically speaking – the type of diet did not make a difference (Mobley. 2015)

As you can see in Figure 2, the scientists observed a “main time effect for MPS”. In non-scientist English this means that the training resulted in statistically significantly increase in muscle protein synthesis in the trained vs. untrained legs at 90, 180 and 270 min. What is much more important, though, is that this effect was not significantly different for the ketogenic vs. Western diet group. In conjunction with the lack of difference in phosphorylated (p)-4E-BP1 (Thr37/46) and p-rps6 (Ser235/236), two important signalling proteins that are involved in the control of skeletal muscle protein synthesis, it is thus probably warranted to conclude that “these data demonstrate that rats fed a ketogenic diet present a similar anabolic response to resistance exercise compared to rats fed a Western diet” (Mobley. 2015). Whether that’s a “fair”, let alone practically relevant comparison (the Western diet was lower in protein and isn’t exactly a good representation of the average diet true muscle heads will be consuming) is anyone’s guess, though.

Ketogenic diets and fat free mass – an issue that requires further research in general: Only recently Grant M. Tinsley and Darryn S. Willoughby from the Baylor University highlighted in a review that a “potential loss of fat-free mass (e.g. skeletal muscle)”, is a “potential concern of these “ketogenic” diets” of which the “majority of studies” suggests that it was inevitable. Since the most of these studies involve “aggressive weight loss diets” and lack an exercise component, “further research is needed to determine whether resistance training can effectively slow or stop the loss of fat-free mass typically seen in individuals following a ketogenic diet” (Tinsley. 2015). The study at hand can thus be considered the first in a line of studies on the effects and “mechanisms underlying the effects of a ketogenic diet on fat-free mass” (ibid.).

Even if it wasn’t for the questionable control diet, there would still be one thing the data from Mobley’s study cannot tell us and that’s whether the putative reduction in IGF-1 that has been observed on low carbohydrate diets (Caton. 2012) may have long(er)-term detrimental effects on muscle gains. There is, as you as a SuppVersity reader will know, good evidence that IGF-1, despite its irrelevance for short term increases in muscle protein synthesis, may play an important role in the long-term adaptational response to exercise (I suggest you go back to this SuppVersity Classic Article if that’s news to you). It’s thus not just the fact that we are dealing with a rodent study here that makes me want to say that future long(er) term studies in humans are necessary before the myth that ketogenic diets may impair (long-term) gains can be put to rest once and for all.

Is weight gain hardly possible on the ketogenic diet? Actually this is another common ketogenic diet myth: When you are consuming a ketogenic diet you cannot get fat. Sounds stupid, right? Well, if you look at a recent study that comes – just as the previously cited study – from the University of Tampa (Holland. 2015), would certainly appear as if there may be something to this claim.

Figure 3: Macronutrient composition of the diets in Holland’s study (Holland. 2015).

As it was to be expected, the rats on the ketogenic diet consumed slightly less energy (3,540 ± 74 kcal) than those on the western diet (3,638 ± 83 kcal) over the course of the six week study. It is thus not surprising that there was a significant inter-group difference in terms in terms of the total amount of weight rodents in the KD and WD group gained: 397g vs. 494g to be precise. 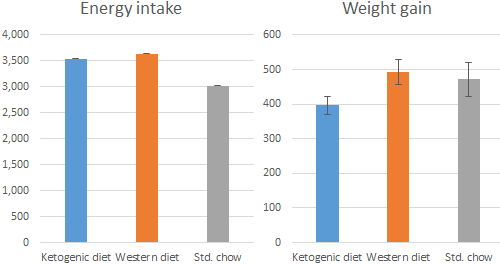 Figure 4: Due to a significantly reduced feed efficacy (weight gain per energy intake) the rats on the ketogenic diet gained sign. less weight than both, the rats on the Western diet and standard chow (Holland. 2015).

What may come as a surprise, though, is the generally reduced feed efficiency (=amount of body weight gained per kcal the rodents consumed) of the ketogenic diet. With a feed efficacy of only 0.018g/kcal, the ketogenic diet was significantly less fattening than the Western diet (0.042 ± 0.007g/kcal) and the standard chow (0.045 ± 0.012g/kcal).

That’s a quite a remarkable result, but if the lack of weight gain applied only to the total amount of body weight, it would be difficult to decide whether that’s a good or a bad thing. When the scientists took a look at the weight of the fat depots, however, it became clear that the lion’s share of the weight difference was mediated by a lack of fat, not just weight gain.

In view of the concomitantly reduced serum triglyceride levels (WD – 319.7 ± 109.8mg/dL versus StdChow 163.0 ± 67.0mg/dL and KD 69.9 ± 21.2mg/dL; p < 0.05), serum cholesterol and glucose levels glucose, the claim that ketogenic diets may help mammals to maintain stable body weights while improving, not messing with their glucose and lipid metabolism does therefore appear to be clearly supported by the study at hand. All that still has to be done before we can remove the “?” from the subheading that precedes the previous paragraphs would be a human study with a similar / identical design to exclude that any differences in glucose and, more importantly, fat metabolism in human beings increase the feed efficacy of the ketogenic diet to an extent that nullifies the benefits.

Which studies didn’t make it into this installment of the ISSN ’15 Research Review? This time, three studies didn’t make the cut. There’s Jason Cholewa’s study on the “effects of a sports nutrition education intervention on nutritional status, sport nutrition knowledge, body composition, and performance in NCAA Division I baseball players,” which may make it into a special on the importance of sport nutrition knowledge, when the full text is published, Solomon et al.’s study on the “efficacy study of alpha BRAIN®” as a nootropic where I would like to see the absolute improvements and the respective standard deviations in cognitive performance before discussing the study in the SuppVersity news, as well as Jones’ and Davidson’s investigations into the “proportionality of skeletal muscle before and after intervention” the significance of which would go unappreciated if I simply summarized the little information from the abstract | Comment on Facebook!