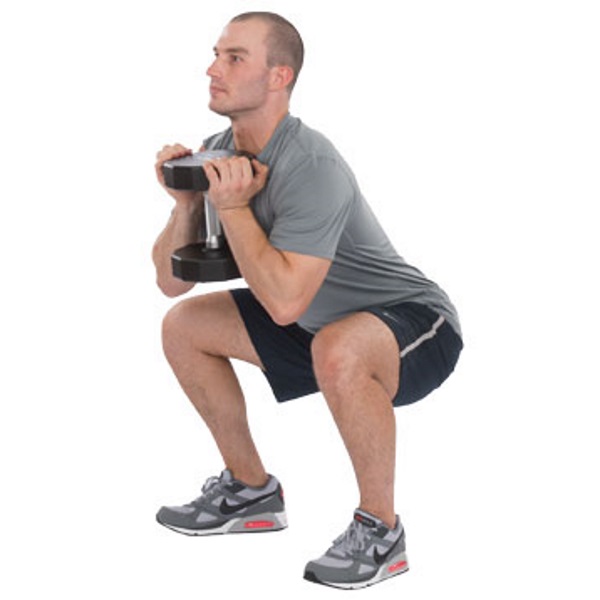 In this episode of STACK Elite Performance, Mike Boyle demonstrates three exercises that can teach proper Squat form to any athlete.

The Squat is one of the most fundamental exercises for improving athleticism. Some athletes are naturally great at squatting. Their hips move well, they have a strong core, their mechanics are great and they are as strong as bulls. Others, however, struggle mightily, and for them, learning how to squat with perfect form can be a challenge.

Many strength coaches and personal trainers shy away from squatting altogether if someone is struggling with it, and instead stick with the Leg Press or something similar. And though this is a viable option for improving leg strength, it does not provide the other benefits that squatting does, such as core strength, coordination and strengthening.

Below is a four-step progression to teach you how to squat with perfect form—from the most basic Bodyweight Squat to the real deal, the Barbell Back Squat. If you’re having a hard time with Squats, take a few steps back, spend 2 or 3 weeks in each stage of this progression, and before you know it you will be squatting more efficiently than ever!

The most basic Squat is the Bodyweight Squat, sometimes called the Air Squat. No weight or resistance of any kind is used. It is simply an unweighted Squat to help you learn the correct movement pattern of the exercise. The Bodyweight Squat is a great diagnostic exercise as well, as it can reveal tightness in the hips immediately, indicated by the athlete leaning excessively forward and having a hard time reaching a parallel or below-parallel position. You can also detect weakness in the abductors when an athlete’s knees fall inward. If either of those things happens, take time to focus on improving hip mobility and strengthening your adductors before moving on to a weighted variation of the Squat.

Proper form for the Bodyweight Squat is to keep both feet flat on the ground, knees aligned over the second toe, hips back, back straight and head and eyes straight forward. For many beginners, the cues of “knees out,” “chest up,” “eyes up” and “sit back” are helpful for finding proper form.

The Goblet Squat is a great exercise for both inexperienced and experienced squatters. With a kettlebell or dumbbell held against the chest, the Goblet Squat helps athletes maintain a tight and rigid core, improve hip mobility and squat depth, and reinforce the squat movement pattern with an external load placed on the body. Start with relatively light weight and work up to heavier weight as you feel more comfortable and your Squat begins to improve.

Proper form includes all of the same points as the Bodyweight Squat: feet flat, knees aligned with the second toe, hips back, back straight, head and eyes straight forward. Keep the kettlebell or dumbbell against your chest at all times, and do not allow your chest and shoulders to fall forward.

The Goblet Squat requires a more upright position than the Bodyweight Squat, which involves greater core strength and stability.

This is the next progression from the Goblet Squat. It has a similar loading pattern in that the weight is loaded on the front (anterior) side of the body. The major difference is that you use a barbell instead of a dumbbell or kettlebell. Also, you no longer hold the weight against your chest. The barbell rests on the front of your shoulders in the “rack” position. This teaches you to further tighten your core; and it helps build strength in the spinal erectors and allows for full depth (below parallel) while squatting.

Do not raise your heels off the ground by shifting your weight forward onto your toes. Keep your feet flat, knees aligned with the second toe, weight evenly distributed throughout the entire foot, back straight, chest up and head and eyes forward.

The final step in our squat progression is the Barbell Back Squat—the “King” of all exercises. Your chest is up, eyes forward, hips back, core tight, knees bent and weight evenly distributed on the feet. Just look at football, volleyball and basketball players. You will see the similarity in their stances compared to the Squat. Also, the Squat plays a crucial role in improving force production, which leads to greater speed, strength and power. Once you have progressed to performing Barbell Back Squats, however, don’t neglect the Front Squat and Goblet Squat. Variety is key for continual improvements in strength and athleticism.

When performing the Back Squat, first make sure that the bar is placed evenly on your back—resting on your traps and not your vertebrae. Next, unrack the bar, step back and place your feet in a comfortable squat position with your weight evenly distributed. Make sure that your knees track over your second toe, and push your knees apart and hips back. Maintain a straight spine and a tight, rigid core. Keep your chest up and your head and eyes forward. It is crucial that everything stays tight.

The best way to do this is to take a deep breath and squeeze your abs tight before lowering with the weight, then slowly exhaling as you squat the weight up. You may take a few breaths at the top of each rep, but make sure to get that deep breath to fill your lungs and support your spine before beginning each repetition.