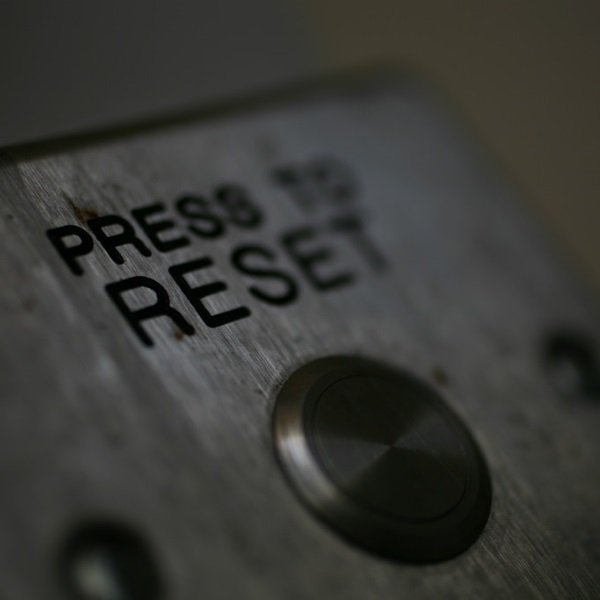 It’s likely, however, you (probably) made the decision to start exercising more or eating healthier.

And then January 2nd came (0r maybe you lasted a week, or hell, a month!) and inevitably, as is the case every year, you got hit with another case of the Eff Its.

Lets Hit the Reset Button
This is the part where I’m supposed to sit here and type comfy words like “develop a support network” or “find a workout with a buddy/friend” or “it’s okay,” or “don’t worry, you’ll get em next year, tiger!”

I’m not going to to that.

You’re a grown up, it’s time to act like one.

The onus is on YOU to make the change.

I’ll grant you you can find inspiration via an article you read, or an audiobook you listened to, and sometimes that’s what we need to hit that tipping point and push us into action.

But it’s still on you to start. To make things happen. To break the inertia of ineptitude.

You can read, renew your subscription to Audible.com, and re-watch all the same motivational workout videos on YouTube you want (and I’d encourage you to do so)…but it doesn’t mean anything unless you put things into action.

People speculate too much.

Since when do we have to “research” everything. I don’t need an article to tell me that sticking my finger in an electrical socket will hurt or that eating something that’s gluten-free will taste like sawdust dipped in anthrax.

Maybe that’s a dumb analogy, but I can’t tell you how many times I’ve had a conversation with someone about their health and fitness and come to find out…they’re really, really well-read.

They’ve read everything. They’re bookshelf would give the Health and Fitness section of Barnes & Nobles a run for its money.

Yet, they’re stuck, incapable of taking that first step; seemingly paralyzed by too much information.

Do you (we) really need a book or article or any sense of confirmation to tell us to just, you know, “show up?”

Come on. Grow up.

You have to take that first step, keep trudging forward, and then, I’d argue, learn to respect the process and not so much the outcome.

April 21, 2016
^^^ That’s today’s date as I type these words. Chances are, like many others, you fell off the New Year’s bandwagon a looooong time ago.

That “promise” you made yourself to get to the gym 3x per week, or to start training for a 5K, or to start cooking more meals at home instead of eating out?

So lets do something about it. Lets pony up. Lets hit the reset button.

I get it: Me being all RAH-RAH telling everyone to “shut up and do the work” isn’t going to solve anything. It won’t help.

And quite frankly, isn’t in my nature anyways.

So, here are some options to ponder:

2) Choice Is a Powerful Commodity
People don’t like being told what to do.3

This is why marrying yourself to one ideology, or book, or person can sometimes be an epic failure. Because what works (or worked) for them, may not apply to you.

If you read a book about yoga and how it’s going to solve all the world’s problems from global warming to your waistline, yet you fucking hate yoga, what’s the likelihood it’s going to work?

For the record: you can switch out the word yoga with powerlifting, CrossFit, pilates, bodybuilding, Olympic lifting, kettlebells, or naked hula-hooping, I don’t care.

I find a lot of success with my own clients the more I give them a choice. Rather than me barking orders, I give them a sense of autonomy and it makes the experience more enjoyable.

Give yourself some choices. You don’t have to go to the gym to perform heavy squats or deadlifts. I think it’s pretty baller if you do, but you don’t have to.

Instead, maybe you want to head to the local football field and perform some 60 yd tempo runs. Or maybe summon your inner-Dan John and perform a day where you do nothing but carry variations and sled drags.

Heck, maybe it’s just a matter of going for a nice, leisurely walk. Exercise is exercise. Give youself some choices. Whatever you need to do in order to put momentum in your favor…..DO IT.

I’m currently reading Smarter, Faster, Better by Charles Duhigg and one of the things he hammers home throughout the book is the notion of stretch goals.

Stretch goals, in short, are goals that force people to commit to ambitious, seemingly out-of-reach objectives which can then spark outsized jumps in innovation, productivity, and progress.

Duhigg uses several examples in his book such as GE CEO, Jack Welch, setting the bar for the company to reduce manufacturing defects on airplane engines from 25% reduction to a 70% reduction; and to do it within three years.

This, of course, was seen as “ridiculous” by managers.

But they got it done.

And while he wasn’t used an example in this book, Steve Jobs was also notorious for pushing his employees to the point where things seemed impossible.

Helping turn Apple back around into one of the most respectable companies in the world? What’s next…1000 songs in your pocket?

The point is: sometimes we undershoot our goals, and the concept of SMART (Specific, Measurable, Achievable, Realistic, Timeline), while admirable and tested, isn’t enough.

“I want to learn to squat better” is cool. But setting a stretch goal for yourself and signing up for your first powerlifting meet at the end of the year is going to light a fire under your ass. It’ll get you out of your comfort zone and give you a sense of purpose and intent in your training.

You’re going to be more likely to kick-ass and take names. Shooting for the stars, may in fact, be exactly what you need.