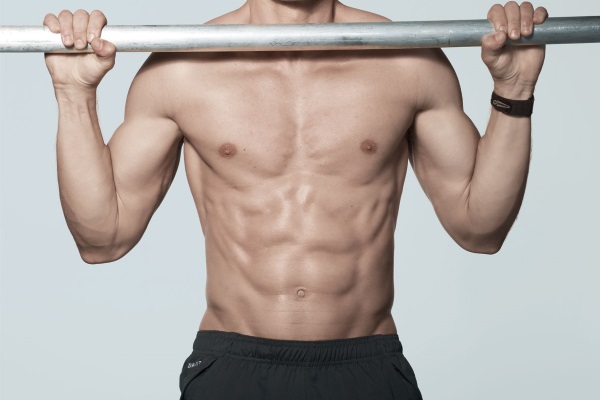 Optimizing your output of the human growth hormone will keep you lean and strong as you age.

For as long as man has wanted a better body, he’s been looking for a wonder drug that will give it to him.

Of course, you know there’s no substitute for hard work and consistency when it comes to building muscle and losing fat. But the idea of a potent elixir that can help speed the process isn’t just a pipe dream, either. Human growth hormone, or HGH, has the potential to pave the way for a younger, stronger, and healthier body—and best of all, your body’s already making it.

Learn to boost your levels naturally and safely, and you can defy the aging process indefinitely.

HOW HGH WORKS
HGH is made from amino acids and secreted by the pituitary gland, the control center for most hormone production that lies at the base of the brain. HGH is released in short bursts every three to five hours and dissipates rapidly—the highest levels occur about an hour after falling asleep. Its peak secretion rate is during puberty, increasing muscle mass and bone density. This happens mainly when HGH stimulates the release of insulin-like growth factor-1 (IGF-1), a hormone that’s the main driver of tissue growth. By itself, growth hormone helps get more protein into your muscles to increase growth and grabs the fat from your reserves and puts it into the bloodstream to be burned for energy. Other benefits include deeper sleep, stronger bones, and increased sex drive.

FIGHT THE NOT-SO-INEVITABLE DECLINE
HGH continues to support our tissues as we age, but levels top out from ages 21 to 30, then slowly taper off while we enter a period called somatopause. Growth hormone reduces by about 14% every 10 years from that point forward, which is why we get fatter and weaker as we age. As HGH levels dive, we can experience a 30–50% loss of lean body mass, along with a 10–50% increase in body fat, a decline in bone density of around 3% a year, disturbed sleep cycles, and reduced immune function.

Panic over the loss of HGH—and greed for its aesthetic and performance-enhancing benefits—has led some to procure synthetic samples of it illegally. The only way to add more HGH to your body is by injection, and receiving such injections without a doctor’s prescription is banned in the U.S. “As a result of a federal law passed by Congress in 1990, HGH is the only drug in America that cannot be prescribed off-label,” says attorney Rick Collins, author, former bodybuilder, and the nation’s foremost legal authority on performance-enhancing drugs and supplements. To be clear, while it’s often referred to in the same breath as steroids, HGH is not a steroid but a separate compound entirely. Anabolic steroids are drugs that are derived from and mimic testosterone, and they bring with them a whole host of side effects, including shrunken testicles and severe mood swings. “Steroids can temporarily shut down your body’s natural production of testosterone, leading to a variety of potential problems,” Collins says. That doesn’t happen with HGH. “But at high doses, both steroids and HGH can have harmful side effects, just like the abuse of any other drug.” As with steroids, the side effects of HGH abuse can be serious, including developing type-2 diabetes and high blood pressure, enlargement of the organs, fluid retention, and muscle weakness, reports the Mayo Clinic. Thankfully, however, HGH can be supported safely and legally by making positive lifestyle changes, including weight training and better nutrition.

A review of studies that appeared in the journal Sports Medicine found that exercise like high-intensity interval training (HIIT) and resistance training (see the workout on page 120 for an HGH-boosting blast) stimulate HGH production. And a study from the Human Performance Laboratory at the University of Connecticut reported that high-volume workouts using large muscle groups with moderate to high intensity and short rest periods produced the greatest levels of HGH release.

Uninterrupted and natural deep sleep is another major factor in HGH release. The importance of getting seven to nine hours of sleep on a regular basis has been gaining ground among pro athletes in the past few years, and it now seems like a no-brainer for improving performance. Research has shown that staying up all night or other disruptions in sleep patterns can limit or even stop the release of human growth hormone dead in its tracks.

SUPPLEMENTAL HELP IS AVAILABLE
Another natural way to increase our bodies’ production of HGH includes supplementing with certain hormone precursors that stimulate the secretion of growth hormone. Known as secretagogues, they include amino acids such as glutamine, arginine, lysine, and ornithine. The timing of taking these aminos, along with the amounts, is crucial to bumping up HGH production. The recommended dosage, according to the American Journal of Clinical Nutrition, is taking two grams of glutamine in the morning; the American Society for Nutrition found that popping five to nine grams of arginine before you hit the weights was effective.

A novel supplement from Novex Biotech, Growth Factor-9, eliminates all the guesswork from assembling a bunch of aminos. Packed with a proprietary combo of amino acids such as acetylcysteine, arginine, lysine, and glutamine, the formulation was shown in results from a double-blind clinical trial released in 2012 at the Obesity Society’s annual meeting to increase growth hormone levels in the blood an incredible 682% two hours after ingestion. (Note that this is not comparable to the effect you’d get from an illegal injection of synthetic HGH but closer to what a healthy young man’s levels are.)

Foods high in amino acids may also bump up HGH production in your body. Your basic protein-packed meats (such as chicken, beef, pork, and fish) are good places to start, and dairy products (such as milk, cheese, and yogurt) can also provide the nutrition you need to encourage HGH secretion. A 2008 study published in the Journal of the International Society of Sports Nutrition reported that choline, a neurotransmitter, may boost production of growth hormone, so be sure to add foods that are high in choline, such as eggs and shrimp, to your training table.

As fit, healthy men interested in becoming the best that we can be, whether it’s in the boardroom or underneath a barbell, the science is clear that optimizing our output of HGH is extremely important to keep lean and strong well into our old age. The prescription is as follows: Perform workouts that push you, supplement with amino acid precursors, and up your diet with fresh, whole foods to produce the highest amounts of HGH possible.