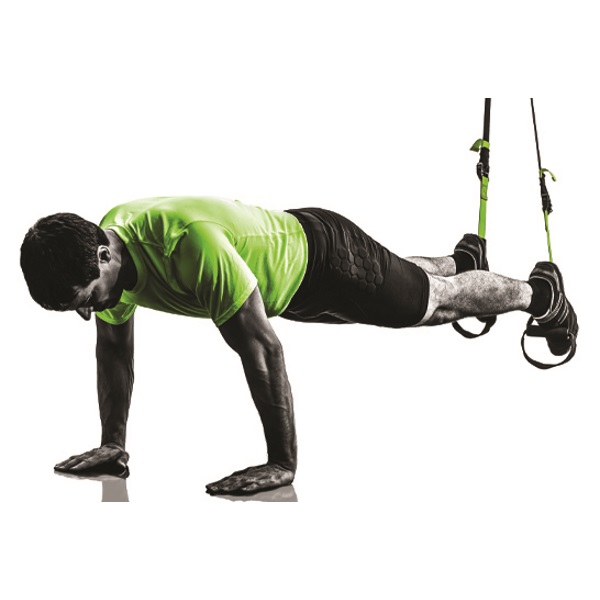 If Crunches and Planks have become too easy for you, but you still don’t have the six-pack you’re looking for, try doing the Bodysaw exercise on a suspension trainer. It will help you develop the thick, muscular abs you want.

Bodysaws can be used two ways—as a stand-alone exercise or as an addition to moves like Reverse Crunches and Pikes. Because of its suspended body position, the exercise provides instant feedback on whether you’re using your abs or the rest of your body.

Although Bodysaws can be advanced to be incredibly intense, they are still suitable for beginners, because they can be modified simply by reducing the range of motion. This can also be done toward the end of a set to get more reps without losing control.

Bodysaws are superior to Crunches and Planks for a few reasons:

As are most ab exercises, this is an assistance exercise, and it should be done after you finish your main lifts for the day, especially those like Squats and Deadlifts that require core tension. If you have a standalone core day, you can add the Bodysaw to the front end because of its difficulty level.

Start working for time, not reps. Three sets of 30 seconds is great. Don’t worry about how many reps you get the first time. Focus instead on total abdominal tension and a controlled pause at the hardest point in the middle of the rep.

As you get stronger, work up to 4 sets of 10 reps, with each rep taking about 5 seconds to complete. You can increase difficulty by moving from a forearm plank position to a push-up plank position. To avoid back strain, master the basic version first, so you don’t fall on your face.

Add the Bodysaw to your program in place of another ab exercise. Do them no more than three times per week, or less than 12 sets per week total.

How To Do a Bodysaw

If you don’t have access to a suspension, trainer, Bodysaws can be done using a variety of other implements. The easiest is a mid-sized Swiss ball, but you can also do them with your ankles on a foam roller.

By adding a pike or knee tuck (as shown in the video above), you can add extra emphasis to the hard-to-train region of your lower abs.