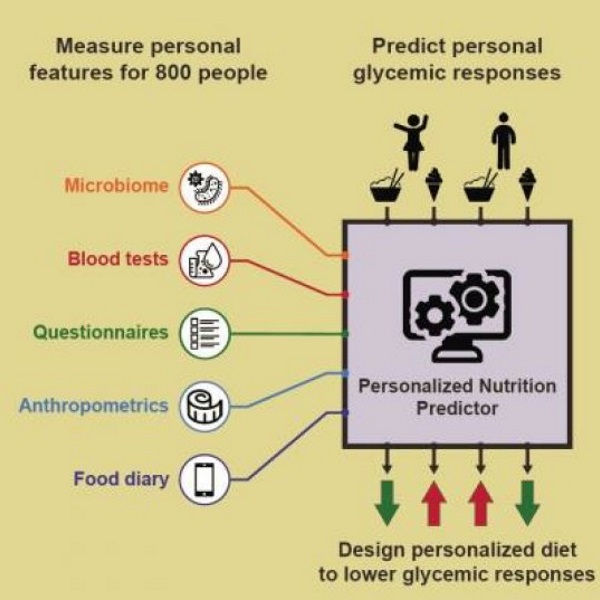 Ever wonder why that diet didn’t work? An Israeli study tracking the blood sugar levels of 800 people over a week suggests that even if we all ate the same meal, how it’s metabolized would differ from one person to another. The findings, published November 19 in Cell, demonstrate the power of personalized nutrition in helping people identify which foods can help or hinder their health goals.

Blood sugar has a close association with health problems such as diabetes and obesity, and it’s easy to measure using a continuous glucose monitor. A standard developed decades ago, called the glycemic index (GI), is used to rank foods based on how they affect blood sugar level and is a factor used by doctors and nutritionists to develop healthy diets. However, this system was based on studies that average how small groups of people responded to various foods.

The new study, led by Eran Segal and Eran Elinav of the Weizmann Institute of Science in Israel, found that the GI of any given food is not a set value, but depends on the individual. For all participants, they collected data through health questionnaires, body measurements, blood tests, glucose monitoring, stool samples, and a mobile-app used to report lifestyle and food intake (a total of 46,898 meals were measured). In addition, the volunteers received a few standardized/identical meals for their breakfasts.

As expected, age and body mass index (BMI) were found to be associated with blood glucose levels after meals. However, the data also revealed that different people show vastly different responses to the same food, even though their individual responses did not change from one day to another.

“Most dietary recommendations that one can think of are based on one of these grading systems; however, what people didn’t highlight, or maybe they didn’t fully appreciate, is that there are profound differences between individuals–in some cases, individuals have opposite response to one another, and this is really a big hole in the literature,” says Segal, of Weizmann’s Department of Computer Science and Applied Math.

“Measuring such a large cohort without any prejudice really enlightened us on how inaccurate we all were about one of the most basic concepts of our existence, which is what we eat and how we integrate nutrition into our daily life,” says Elinav, of Weizmann’s Department of Immunology. “In contrast to our current practices, tailoring diets to the individual may allow us to utilize nutrition as means of controlling elevated blood sugar levels and its associated medical conditions.”

Compliance can be the bane of nutrition studies. Their outcomes rely on participants, away from the laboratory, rigidly following a diet and honestly recording their food intake. In the Weizmann study, the participants (representing a cross-section of Israel’s population and all unpaid) were asked to disrupt their weekly routine in two ways: They were to eat a standardized breakfast such as bread or glucose each morning and also enter all of their meals into a mobile app food diary. In return, the researchers would provide an analysis of the participants’ personalized responses to food, which relied on strict adherence to the protocol. Elinav and Segal say this proved to be a strong motivator, and participant meal reporting closely matched the biometric data obtained from their glucose monitors.

The individualized feedback yielded many surprises. In one case, a middle-aged woman with obesity and pre-diabetes, who had tried and failed to see results with a range of diets over her life, learned that her “healthy” eating habits may have actually been contributing to the problem. Her blood sugar levels spiked after eating tomatoes, which she ate multiple times over the course of the week of the study.

“For this person, an individualized tailored diet would not have included tomatoes but may have included other ingredients that many of us would not consider healthy, but are in fact healthy for her,” Elinav says. “Before this study was conducted, there is no way that anyone could have provided her with such personalized recommendations, which may substantially impact the progression of her pre-diabetes.”

To understand why such vast differences exist between people, the researchers conducted microbiome analyses on stool samples collected from each study participant. Growing evidence suggests gut bacteria are linked to obesity, glucose intolerance, and diabetes, and the study demonstrates that specific microbes indeed correlate with how much blood sugar rises post-meal. By conducting personalized dietary interventions among 26 additional study participants, the researchers were able to reduce post-meal blood sugar levels and alter gut microbiota. Interestingly, although the diets were personalized and thus greatly different across participants, several of the gut microbiota alterations were consistent across participants.

“After seeing this data, I think about the possibility that maybe we’re really conceptually wrong in our thinking about the obesity and diabetes epidemic,” says Segal. “The intuition of people is that we know how to treat these conditions, and it’s just that people are not listening and are eating out of control–but maybe people are actually compliant but in many cases we were giving them wrong advice.”

“It’s common knowledge among dieticians and doctors that their patients respond very differently to assigned diets,” he adds. “We can see in the data that the same general recommendations are not always helping people, and my biggest hope is that we can move this boat and steer it in a different direction.”

The researchers hope to translate what was learned in this basic research project so that it can be applied to a broader audience through further algorithmic developments that would reduce the number of inputs that are needed in order to provide people with personalized nutritional reports.