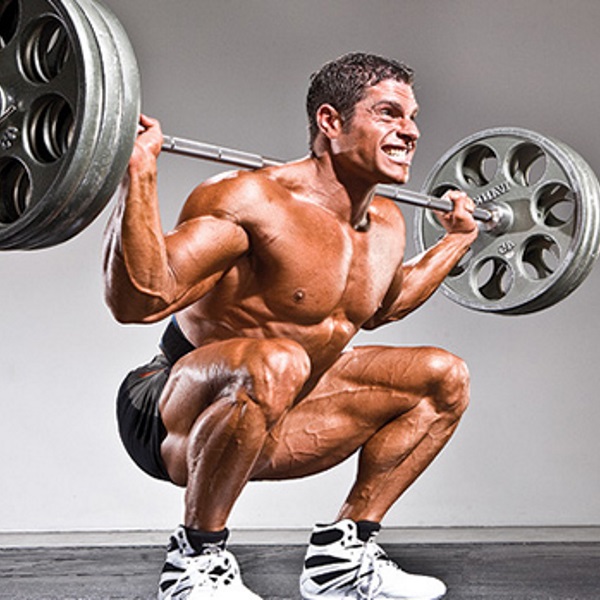 The latest resistance training study from the Charles Sturt University comes to a somewhat expected suggestion in the practical implications: “[R]esistance training programs designed to change body composition (e.g., hypertrophy, fat loss) are reliant not so much on power and force but more on total work performed, high-intensity FROM [full range of motion] squats should be the focus” (Drinkwater. 2016).

Unsurprising for everyone, who has read the previous SuppVersity articles, in which I’ve often argued for “full squats for full development”.

The argument here was yet based on a comparison of 50° (=very shallow) and 90° squatting which is still far away from the ass to the ground squat you would see and expect in a “full squat” and thus the PROM vs. FROM classification Drinkwater et al. used in the study I want to focus on in today’s SuppVersity article. Here, the authors modified both the range of motion (ROM) and the load (67% 1 repetition maximum [1RM] or 83% 1RM) thus ending up at a comparison between the following 4 squatting regimen:

Table 1: The four conditions of the independent variable across 2 different relative intensities and 2 different ranges of motion (Drinkwater. 2016).

Eventually, we are thus comparing “partial”, as in only to parallel, to real “full” squats, as in ass towards the ground – FROM10, is a full squat performed with a weight you can handle for 10 rep, while PROM5 is a squat to parallel with a weight that’s high enough to have you fail after 5 reps… any question left? Maybe the scientists’ own tabular overview in Table 1 can help.

Partial and full are not defined: When you decide to do some additional research on the topic of partial vs. full reps, be careful with what you read in abstracts. Often the definition of “partial” and “full” is very different from the (logical) one in the study at hand, where a squat to parallel is – just as it is actually the case “partial” – and a “full” squat is a squat beyond parallel to a knee angle of ~120° – that’s something you must keep in mind when reading other studies.

As the authors rightly point out, the squat is used and even prescribed in commercial gyms. It is, however, not just “technical[ly] difficult”, but also an exercise many trainers and trainees give and receive very “poor instruction” on (Chiu. 2009) – and that’s not just because many trainers have no idea what they are talking about, it’s also because of contradictory evidence from scientific studies that makes it difficult to give science-based advise:

Evidence of what these changes will actually do to your gains is even more scarce. And when it exists it looks like the graph from Weiss et al. (2000) in Figure 1. 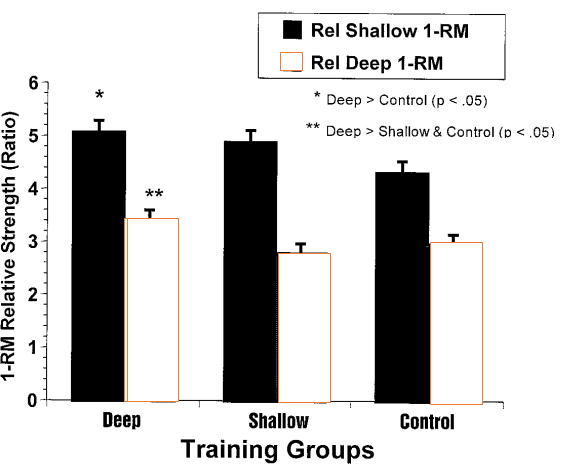 In their subjects, healthy young male (n = 10) and female (n = 8) university students, with at least 1 year of training experience, Weiss et al. did not find sign. inter-group differences in the jump tests, but a sign. advantage of squatting to parallel (vs. 50% parallel) in terms of the strength development. With the difference being everything but earthshattering, though, Drinkwater et al. rightly point out, the influence of squat depth as a variable in squat training must still be considered “unclear” (Drinkwater. 2016):

“Although electromyography studies generally demonstrate greater muscle activation during full squatting, it is not clear if there are any functional (kinetic) differences. If squatting to parallel is safe and produces superior movement kinetics, there is a rationale for supporting parallel depth squatting. Therefore, the purpose of this study is to directly compare the kinetic properties of FROM and PROM squats at different intensities” (Drinkwater. 2016). 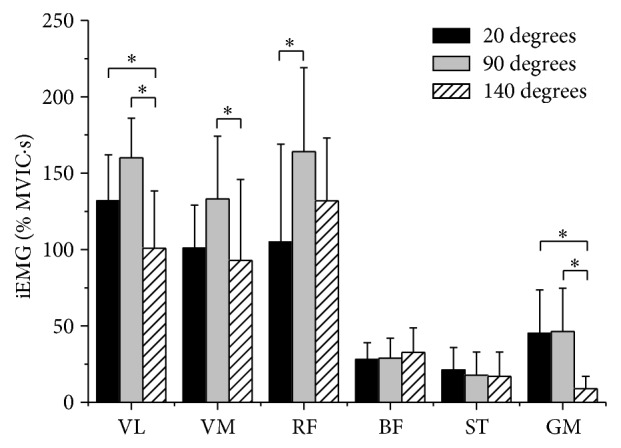 More recent squatology: A recent study from the Methodist University of Piracicaba provides additional information about the effects of your squatting angle (Marchetti. 2016). The purpose of the study was to compare muscle activation of the lower limb muscles when performing a max. isom. back squat exercise over 3 different positions. 15 young, healthy, resistance-trained men performed an isometric back squat at three knee joint angles (20°, 90°, and 140°) in a rand., counterbalanced fashion. Surface electromyography was used to measure muscle activation of the vastus lateralis (VL), vastus medialis (VM), rectus femoris (RF), biceps femoris (BF), semitendinosus (ST), and gluteus maximus (GM).

The results show that, in general, muscle activity was the highest at 90° for the three quadriceps muscles, yet differences in muscle activation between knee angles were muscle specific. Activity of the GM was significantly greater at 20° and 90° compared to 140°. The BF and ST displayed similar activation at all joint angles. In conclusion, knee position alters muscles activation of the quadriceps and gluteus maximus muscles. An isometric back squat at 90° generates the highest overall muscle activation, yet an isometric back squat at 140° generates the lowest overall muscle activation of the VL and GM only.
Drinkwater’s subjects were trained male Rugby players, who had at least 1 year of squat training experience and a 1RM of more than 148.83kg (+/-28.75) kg on the full squat (270.78kg on the partial squat) – so no scrawny beginners squatting 50% of their body weight, here… 😉

“Technical criteria for both squat techniques involved cradling the bar on the back in the ‘high bar’ position with feet placed approximately shoulder width apart, and the toes pointed slightly outward based on the preference of the participant. Feet and heels remained flat on the floor and the back flat at all times. The knees and hips were flexed to the goal depth and then fully extended to the beginning position. The bar was not allowed to stop at anytime during sets” (Drinkwater. 2016).

After each set, the subjects were allowed to rest for 90 seconds, a squatting speed was not prescribed. Rather, “[t]he speed of the squat was performed at and unintentional velocity (i.e., at the participant’s own discretion | Drinkwater. 2016).

In view of these results it should be obvious that there cannot be a single form of squatting, i.e. deep and shallow, heavy or light, that promotes everything power, force, fat loss (energy expenditure), explosiveness, etc. maximally. This takes us back to our point of departure, the quote in which Drinkwater et al. simply assume that the recently confirmed link between workload and muscle gains would imply that their study suggested to do partial squats and benefit from the increased total workload.

If you take a look at the last row of Table 1, the scientists’ conclusion that “high-intensity FROM squats should be the focus […] resistance training programs designed to change body composition (e.g., hypertrophy, fat loss)” is just as accurate as their more general statement that “participants involved in resistance training should consider the use of near-maximal PROM squats if their goal
is to exert maximal force or power through a limited range of motion” (Drinkwater. 2016) – and eventually, both recommendations are in line with previously discussed studies such as the “full range for full gains” or the “partial reps for full strength” article I wrote in 2014.

The study cannot answer all our questions, but… in conjunction with previous research investigating the chronic, adaptational response to partial and full squats, it adds to the evidence that doing both, i.e. partial and full squats to focus periodically on strength and size respectively could be the best strategy for maximal leg development.

The fact that, in both cases, lower reps with weights that are closer to the 1RM appear to produce better results, on the other hand, is something I would like to see independently confirmed… if the workload is the same. Ok, if on the other hand, the number of reps that can be done on the full squat suffers from weight increases to an extent that affects the total workload, the previously cited hypothesis “more volume = more gains” would suggest that you have to at least increase the number of sets to compensate for the effects increasing the weight on your workout volume (e.g. do 10×5 reps with high vs. 3×10 reps with a low weight to ensure that you actually have a higher total volume)