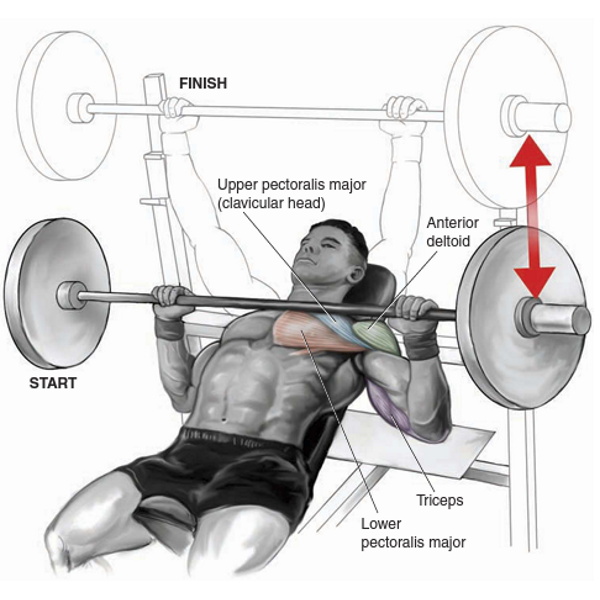 If you’re on a look out for workout routine that will isolate your chest you’ve came to the right place. We offer you a selection of three supersets presented by Tim McComsey – the founder of TRyMFitness – which will provide you with balanced chest growth.

According to McComsey, the efficiency of his program is due to the variety of movements it involves. It utilizes barbells and dumbbells for the pushing movement, flyes for the stretch, and it also involves push-ups as bodyweight training.

Position yourself comfortably on an incline bench aligning the upper chest with the barbell.

Hold the bar tightly using pronated grip with your hands slightly wider than shoulder width. Make sure that your elbows are as close to the ribs. Unlock the bar and lift it above your chest with your arms fully extended and elbows locked. This is the initial position.

Start lowering the barbell down to your chest breathing in during the movement.

Once the bar has touched your chest, hold the position for a second, breathe out and push the weight up to the starting position.

Hold again for a second and continue with the downward movement.

Perform 3 sets with 6 reps and continue to the next move. Lie down on a flat bench placing the dumbbells on your knees. Take the dumbbells up positioning them right above your chest with fully extended arms.

Start lowering the dumbbells to both sides, by slightly bending your elbows in the process. Breathe in during this portion of the move. When you reach the lowest position, the elbows should be at a slightly lower level in respect to your body.

Return to the starting position squeezing your chest and muscles. Hold the top position for a second and repeat.

Perform 3 sets with 10 reps. Take a 90 seconds rest before continuing to the remaining two supersets. Lie down on a flat bench holding the dumbbells in your hands. Position them to the side of your chest so that the upper arm and the forearm are at a right angle. Your palms are facing away from you.

This is your initial position.

From this point on you’ll need to control the dumbbells all the time.

Once you’ve settled in the initial position, press the dumbbells up, breathing out during this movement. Hold the position at the top of the lift for a second, squeezing your chest. Breathe in as you lower the dumbbells to the starting position.

Perform 3 sets with 6 reps before continuing to the second move. Before sitting yourself into the initial position set the pulleys at the lowest level available on the machine.

Set the incline bench at 45 degrees, positioning it between the pulleys. Grab the handles in each of your hands and lie back on the bench with your arms extended by your sides.

Breathe out and pull the handles to the middle of your chest by bringing your arms together in front of your face.This is your initial position.

Start lowering your arms at both sides making a wide arc by slightly bending your elbows in order to avoid stressing the biceps. Breathe in during this portion of the move.

Return to the starting position squeezing your chest muscles and breathe out. Hold the top position for a second and repeat.

Perform 3 sets with 10 reps. Take a 60 seconds rest before continuing to the last superset. This exercise is best performed with a spotter to hand you the weights, because in this way you avoid stressing your shoulders. Lie down on the decline bench, and let the spotter place a dumbbell in each of your hands. You start at the top position, with arms stretched up at shoulder width and your palms facing each other.

Slowly rotate your wrists, positioning the dumbbells so that your palms are facing away.

This is your initial position.

Breathe out and lower the weights gently to your sides by bending your elbows, until you feel a stretch in your chest muscles. Don’t overdo with this portion of the movement.

Breathe out and press the weights up. Hold the top position for a second, squeezing your chest muscles and return to the downward movement.

Perform 3 sets with 8 reps before continuing to the second move. Place your feet on a box or a bench and position your hands on the floor, straightening your torso into a plank. Your arms should be extended at about shoulder width. This is your initial position.

Breathe in as you lower yourself down toward the floor, until your chest are almost touching it. Your hands should be bent at your elbows forming a right angle in this position. Breathe out and push your torso back to the initial position.