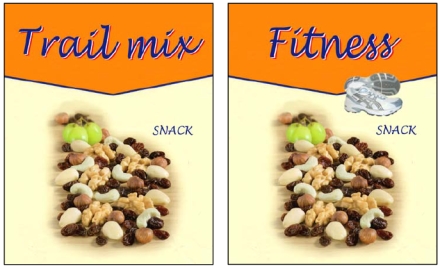 Many people who want to lose weight do so by eating less and exercising more. They become ‘restrained eaters’. But according to health scientists Joerg Koenigstorfer and Hans Baumgartner, food manufacturers can easily break these people’s willpower and get them to eat too much. All they have to do is promote their foods as ‘fitness foods’.

Study
The researchers, who work at the Technical University of Munich in Germany and Pennsylvania State University in the US, studied the effect of fitness branding on eating behaviour. In the article they recently published in the Journal of Marketing Research they describe experiments they did with a group of students, average age 19.

In one experiment the researchers divided the students into two groups. Both groups were given a pack containing a mix of nuts and raisins. The pack given to one group had nothing special on it; the pack given to the other group had exactly the same contents but was labelled ‘Fitness Snack’ and had a picture of trainers on it.

Results
Well nuts and raisins aren’t the unhealthiest kind of food, although the calorie count is on the high side. But when the mix was packed in a bag labelled ‘Fitness Snack’ and with a picture of sports shoes on it, the students who were being restrained eaters started to eat more, as the figure below shows.

In another experiment the researchers got their subjects to cycle after they’d eaten as much as they wanted from their packs of ‘Trail Mix’ or ‘Fitness Snack’. The figure below shows that the restrained eaters cycled less after eating nuts from the ‘Fitness Snack’ pack.

Conclusion
“Restrained eaters want to manage their weight, but their weight control behaviors are not always successful”, Koenigstorfer and Baumgartner wrote.

“Fitness branding in food marketing can exacerbate this problem because fitness cues make eating dietary permitted food compatible with weight control, and increased consumption of fitness-branded food may even serve as a substitute for actual physical activity.”