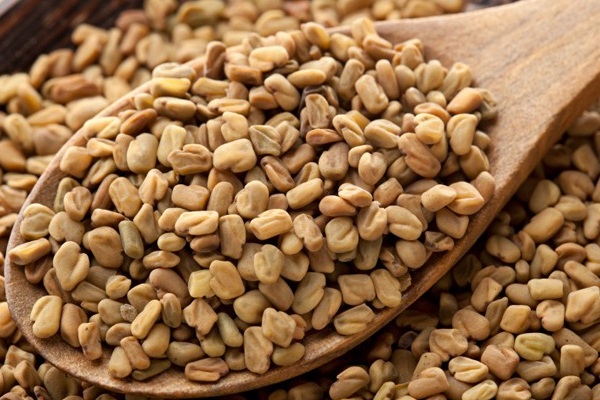 You probably know of fenugreek – scientific name Trigonella foenum-graecum – as an herb that boosts testosterone levels and improves the ratio of muscle to fat mass. Well, it might be that you’ll be seeing the same fenugreek as a component in supplements that are supposed to boost growth hormone levels. Korean researchers at Yeungnam University discovered the effect when they did experiments with cells from rats.

Growth hormone & fenugreek
The researchers stumbled upon the growth-hormone stimulatory effect of fenugreek when they screened a methanol-based extract of fenugreek using cells from the pituitary gland of rats. The pituitary is a gland in the brain, which, apart from secreting testosterone-stimulating hormones LH and FSH, also secretes growth hormone. The activity of the pituitary increases if the hypothalamus – another gland in the brain – synthesises more LHRH and more GHRH.

The Koreans were looking for substances that stimulate the production of growth hormone as remedies for osteoporosis, muscle decline and other signs of old age. In 2007, 2003 and 2004 they published studies which showed that growth hormone production is boosted by glycyrrhizin and glycyrretic acid in Glycyrrhizae radix, 1-monopalmitin and 1-monlionlein in Astragalus membranaceus and puerarin in Pueraria thunbergiana.

Study
In the article we’re writing about here, which was published in 2008 in Chemistry & Biodiversity, the complete methanol extract boosted the production of growth hormone by almost 2200 percent, as shown in the table below. The concentration at which that happened was exceptionally high: 1 mg per millilitre.

When the researchers isolated compounds from the extract and studied them individually, it turned out that two components were active: fenugreek saponin I (compound 1) and dioscin (compound 9). These boosted the GH emission by a factor of 13 and 18 respectively, at a concentration of 20 micrograms per millilitre.

Unknown mechanism
An increasing number of studies – nearly all funded by manufacturers – are revealing that fenugreek extracts have properties that are interesting for athletes. They enhance muscle mass and strength, they stimulate fat burning and endurance capacity and boost men’s sex drive. The theory most posited is that fenugreek extracts boost testosterone production. Fenugreek does indeed do this, but not to the extent that you can expect to see the effects measured.

The Korean study helps explain the paradox: fenugreek does work, but in a different way.