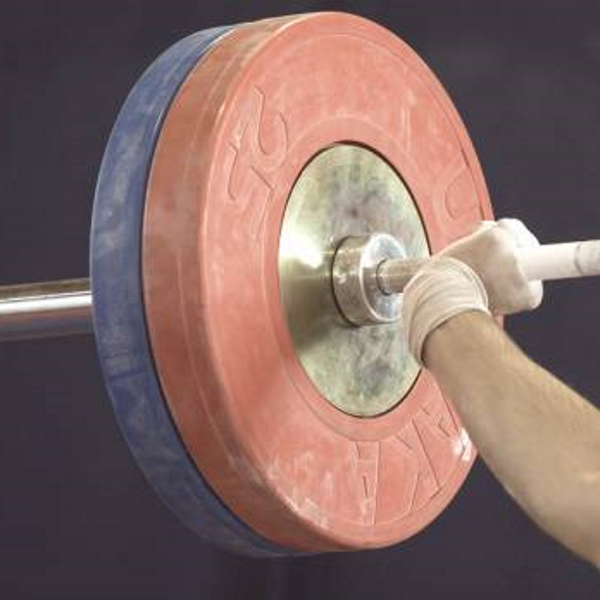 In Olympic weightlifting we are often called upon to differentiate our style of training and competing from powerlifting. Even more frequently, our activities are erroneously referred to as “powerlifting.” (Oddly enough, the Olympic lifts actually produce more power than the so-called powerlifts, which are better referred to as strength lifts.)

The general public lumps all resistance training together and has little interest in the subtle differences. Occasionally, we weightlifters do get asked what distinguishes our sport from powerlifting, and we usually fall back on the “explosiveness and technique versus slow and simple” explanation. We like to point out that weightlifting utilizes fast, explosive movements whereas powerlifting uses slower and presumably less explosive ones. This is often stated with a tone of smugness and not a little air of superiority.

Lifters can always learn something from one another.

Then, with an extra turn of the screw, we like to point out that weightlifting requires much more technique than the power lifts. We like to think our snatches and cleans require a tremendous amount of athletic ability and conversely any dunderhead can learn the bench press, squat, or deadlift in one training session. Oddly enough, while weightlifting insiders like to point out the complexity of the lifts, our detractors give it even higher praise, albeit in a left-handed manner. There are many gurus in the physical training universe who imagine the Olympic lifts to be so complex that it takes many years to finally master them. The fact that lifters in their mid-teens are lifting about 95% of the senior world records proves this is nothing but a misconception.

When I was a young Olympic lifter, I harbored these thoughts myself. I took a fling at powerlifting back then, but only as a change of pace from my main interest in the overhead lifts. But as time passed, so did the bloom of my weightlifting prime. The weightlifting door had slammed shut behind me, and there was no going back.

Like most lifters, I did not consider quitting. I simply decided to give the powerlifts another look after a quarter century of neglect. I was soon back to benches, squats, and even (ugh) deadlifts. I added the overhead press as a nostalgia item. I wasn’t too bad at the Olympic press and thought that I might still do alright on a more strict overhead movement. For the most part I was satisfied with the results even though I could not lift what I did in my prime.

But enough of my odyssey. What I really want to talk about is what I discovered about the nature of the so-called slower lifts as I was forced to become reacquainted with them.

Let’s start with explosiveness. The top of the pull or the lockout of a jerk requires dynamic effort if you want to handle a substantial weight. That is obvious to anybody who watches these lifts being performed. Conversely, a limit squat or a bench press does not look explosive at all. The bar is taken off the racks and makes its way upwards at an unimpressive speed. The bar certainly doesn’t explode, and that’s what confuses people. But does that mean it is not an explosive lift?

The answer to this question is obvious to any experienced powerlifter. A 1RM bench does not move off the chest quickly compared to a snatch in the third pull, but that’s not what we should be looking at. What is most important is what is happening in the muscle fibers. If we could look inside the lifter’s pecs and delts, we would see frantic activity. To move that weight, the fibers have to be activated completely and immediately or else the lift will surely fail. The bar moves upward slowly because it’s heavy, not because the lifter is trying to move it slowly. But the original impetus was vigorous.

“If we could look inside the lifter’s pecs and delts, we would see frantic activity. To move that weight, the fibers have to be activated completely and immediately or else the lift will surely fail.

This became clear to me some years ago when I was asked to coach a powerlifter in her first competition. She had bought into the “powerlifters lift slowly” idea prevalent with inexperienced Olympic lifters. She took the bar out of the rack with no emotion and more importantly, had no explosion at the bottom. She made the lift, but that’s only because it was way below her potential. Not wanting to risk injury by changing her technique during the competition, I told her to watch the other more experienced lifters. She immediately realized that she wasn’t explosive enough in her initial drive. After a period of proper training, she moved her bench up about 40 percent.

The lesson is, if you’re discussing explosive, ballistic movement, don’t look at the bar speed. Look at what’s happening in the muscle.

Now let’s talk technique. Another article of faith among Olympic lifters is that their sport requires great technique and powerlifting does not. This was another delusion that disappeared quickly as I reacquainted myself with our sister sport. It’s true that the bench press merely pushes the bar from the chest, the squat pushes the bar up from the bottom, and the deadlift lifts it up off the floor. That seems so simple – until you start trying it with heavyweights, that is.

A lifter soon discovers that technique for the powerlifts can be just as intimidating as that of the Olympic lifts. Anthropometry is equally vital, as leverage is even more important in powerlifting. Your own back length, leg and arm lengths, and muscle attachment points will have a major impact on your stance and grip width. Bar path, foot position, head direction, and other considerations during the lift are just as decisive. Change any of these and your 1RM potential will change.

I learned all of this in a painful manner. In the days of my careless youth, I could take hold of the bar as I pleased and be confident I could complete the lift. But as I got older, I quickly found that the bar had to be in the right position or I was going to lose leverage. I also found out that if I tried to lift with the wrong grip width or arm angle, I could easily cause injury in my now older body.

But the lessons are not a one-way street. Powerlifters often assume Olympic lifting is all momentum and that absolute strength is less important. The momentum part is correct. You simply cannot clean a decent amount of weight without it. The speed with which a good clean rises the shoulders makes the weight seem light and the pull effortless. But the important thing for critics to realize is that this momentum is impossible to achieve without a high force impulse to begin with. Momentum cannot be produced out of thin air.

Lifters can always learn something from one another.

What we should take away from this is that all training modes have their desirable qualities. Lifters can always learn something from one another. As we see in so many fields of life, an open mind always trumps mindless prejudice. With this mindset, we may find our differences are not as significant as our similarities.