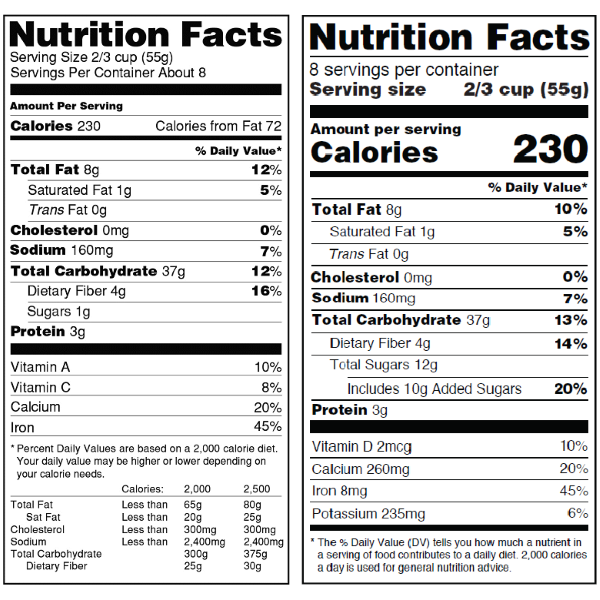 At the end of May 2016, FDA issued its final rule revising nutrition labeling requirements for conventional foods and dietary supplements. FDA’s intention behind the revisions was to help consumers make better food choices by requiring labels to provide comprehensive, yet easy-to-understand, information about the nutrient content of foods. The modifications to the decades-old nutrition label reflect updated scientific information, the most recent dietary recommendations from expert groups, as well as industry and public input submitted in the thousands of comments the agency received.

Calories and Serving Size now take center stage—FDA considers Calories and Serving Size to be two important elements to help consumers make good food choices. The Calories heading and quantitative amount by weight declaration are required to appear in bold type and in a larger font size (only the Calories heading for supplements) in both the Nutrition Facts and Supplement Facts boxes. Also, in the Nutrition Facts box, the Serving Size declaration is required to appear in a larger font size and in bold type.

The % Daily Value footnote gets an overhaul—The footnote required in the standard Nutrition Facts format has been revised to read: “*The % Daily Value tells you how much a nutrient in a serving of food contributes to a daily diet. 2,000 calories a day is used for general nutrition advice.” The Supplement Facts % Daily Value footnote remains unchanged. For both conventional foods and supplements, a slightly revised footnote must be used on products intended for children 1 to 3 years of age which states 1,000 calories instead of 2,000.

Vitamins A & C take a back seat to vitamin D and potassium—Under the old regulations, vitamin A, vitamin C, calcium, and iron were required to be declared in the nutrition label. Vitamin A and vitamin C are now relegated to voluntary status, and vitamin D and potassium are required to be declared. Also, declaration of the quantitative amount by weight of vitamins and minerals will be required for the big four and be voluntary for the rest. While the declaration rules for supplements differ from conventional foods, the nutrient status swap is the same for the Supplement Facts box.

Folate gets special treatment—The new rule requires that products containing folate, folic acid, or a mixture of both and that declare the nutrient, declare it as “Folate.” Also, when the synthetic form of the nutrient, folic acid, is added, it must be declared in parentheses after “Folate.” In order to account for the greater bioavailability of synthetic folic acid that is added to fortified foods or dietary supplements than folate that occurs naturally in foods, any quantitative declaration of folate must be in terms of Dietary Folate Equivalents (i.e., mcg DFE), and the percent Daily Value must be based on folate in mcg DFE.

Nutrient calculations just got a lot more difficult—FDA is abandoning International Units (IU) and is now requiring that vitamins A, D, and E be declared in terms of weight. Also, when determining quantitative amounts by weight and corresponding percent Daily Values, manufacturers must now take into account Retinol Activity Equivalents for different sources of vitamin A, the level of two out of the eight stereoisomers of alpha-tocopherols for vitamin E, and the level of niacin resulting from the conversion of dietary protein containing tryptophan.

Say goodbye to “Calories from Fat”—In keeping step with the current state of nutrition research that shows that it is the type of fat, and not the amount of fat, consumed that impacts health, FDA is no longer requiring the declaration of calories from fat.

The controversial “Added Sugars” provision is finalized—Despite strong opposition from several factions in the food industry, the agency has finalized the requirement that nutrition labels for both conventional foods and dietary supplements include a declaration of added sugars when they are present. A Daily Recommended Value (DRV) for added sugars has also been established.

Significant changes to RDIs and DRVs—Most of the established Recommended Daily Intake (RDI) and DRV levels have been revised to reflect the latest scientific research relating to nutrient needs. The agency has also formally adopted RDIs and DRVs for the specific categories of infants through 12 months, children 1 through 3 years, and pregnant and lactating women. FDA has also established an RDI for choline, and is now allowing for the voluntary declaration of fluoride.

Updates to RACCs to reflect current eating patterns—Some reference amounts have been revised upward to more accurately reflect what people are actually eating. For example, the reference amounts customarily consumed (RACC) for ice cream is up to two-thirds of a cup from one-half of a cup, and the RACC for soda is up to 12 oz from 8 oz.

Single serving packages also get a reality update—Packages that are between one and two servings will now be required to be labeled as one serving since that is how people typically consume the product (e.g., 20 oz soda, 15 oz can of soup).

Per Serving/Per Package Labeling—Certain multi-serving foods that can be consumed in one sitting will be required to provide nutrition information on both a “per serving” and “per package” basis.

Manufacturers that have US$10 million or more in annual food sales must comply with the new regulations by July 26, 2018, while smaller companies have been given an extra year to comply. While it seems like a long time from now, companies would be wise to start considering how these changes may affect not only their product labels, but the content of their products. For example, FDA has now limited what it considers to be dietary fiber and has finalized its narrow definition of vitamin E to include only alpha-tocopherols. Because in some cases, significant product changes will need to be made, both food and dietary supplement companies should determine how the rules are going to impact their products sooner than later.