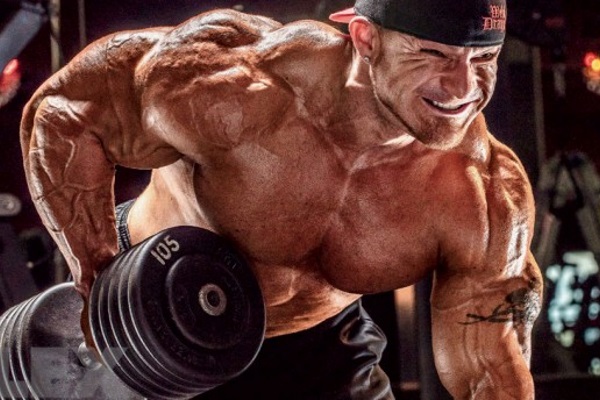 James “Flex” Lewis established himself as the best 212-and-under bodybuilder when he won the 212 Showdown at the 2012 Olympia Weekend. Since that win, Lewis has remained undefeated. While it takes a great physique to win a bodybuilding contest, it’s the mind behind the muscle that gets the body into the gym and onstage to do what it does. Here FLEX the magazine talks to Flex, the man, about the mindset and training methods that have taken him to the very top of his division.

FLEX: When you started lifting, what were your workouts like?

Flex Lewis: Very primitive. Bare basics. Which is probably why I have the mindset I have. One of the first gyms I ever joined was a powerlifting gym. We had a squat rack and bench presses, and we had homemade dumbbells because one of the guys in the gym was a welder. There was a seated chest press we’d turn into a back exercise. Any piece of equipment—we’d take its conventional style, whatever it was made for, and turn it into something else.

That mindset—that you see these great bodybuilders coming out of these places without X, Y, and Z equipment— that mindset was instilled in me early on. Some guys come from very well-equipped facilities, and when they’re forced to travel and train in some hole-in-the-wall with antique pieces they bug out. Dorian Yates was a freak of nature, and he was created in a small little underground gym with no room to swing a cat, so to speak.

FLEX: Were you one of those guys who neglected entire body parts?

Flex Lewis: No, although I did fall into that thing everybody falls into: trying to keep up with your friends and peers and not stimulating the muscle you’re trying to work. For example, I’d use a lot of triceps instead of chest on the bench press.

Early on, some of my body parts blew up, like my legs. Others didn’t, like my chest. Part of that was because I was pressing with my shoulders and my triceps. Chest took a backseat not because I wasn’t training it but because I was training it wrong. I never really had someone say, “Slow yourself down, concentrate on the squeeze.” It wasn’t until I’d won a couple of shows and was traveling back and forth to the States that I said to myself, “Something isn’t right. I need to learn the essence of the mind-muscle link.”

I dropped the weights and started pressing the bar again just to get that mind-muscle connection. And I’d feel it when I was going too heavy. I could press 315 for reps, but I’d be getting a pump in my triceps and delts. It was more of a powerlifting movement. I wasn’t feeling it in my chest. So I guess I should say I wasn’t feeling it when I was going heavy. But I understood what I was doing wrong, and I was willing and able to correct it, which meant dropping a plate on each side, slowing down the reps, and concentrating on the feel.

FLEX: When many guys start training, they neglect an entire part of their body, either their legs because they’re so hard to train right or their backs because they don’t see their backs in the mirror.

Flex Lewis: When I was 12 and saw my first bodybuilding book, it was the Encyclopedia of Bodybuilding [by Robert H. Kennedy], with photos of Tom Platz. That’s what got my attention. I never went into the gym to get the big arms and the big chest. It was the opposite: I wanted big legs!

FLEX: We’ve detailed your last back workout and a typical Y3T training protocol. What else do you do to increase the intensity and work that muscle?

Flex Lewis: My rep range is never less than six and sometimes all the way up to 30, depending on how I feel. As the sets continue, the reps decrease, and the weights increase slightly.

If I don’t feel like I’ve had a good set or didn’t put the weight up high enough, I won’t count that as a working set. For instance, I might have a goal of doing five sets of low pulley rows, but I may complete a set feeling like I didn’t do it well enough to consider it a work set. So I won’t. I’d do another set with the same amount of reps and count that as my set. That said, I’m not one of these guys who have a fixed number of sets in my head that I’ve just got to do.

Flex Lewis: I remember meeting Tom Platz very early in my career. They say, “Never meet your idols [because you’ll be disappointed],” but I met him and walked away with more enthusiasm for having done so than I could have ever imagined. He gave me advice. Tom said he would go into a set with the same approach every time and that was not having a number of reps in his head. He was going for “total annihilation.” I remember his telling me this. [Amused] “Total annihilation” was when his hands wouldn’t be able to grasp the bar any longer if he was doing arms, or his legs would just fatigue and collapse. Not saying I agree with that crazy mentality, but if I do have a number of reps I want to achieve and I can do more, I’ll do more. I’ll do a rest-pause and go for a couple more reps.

FLEX: How often do you and Neil [Hill, Lewis’ trainer and nutritionist] change it up?

Flex Lewis: We’ve been working together for a number of years. He knows I like to mix things up, and he works with me. When I’m on the road, my workouts tend to look like a Week 2 of Y3T. Before a show, we’ll do a four- to six- week program, mix it up, do another four to six weeks, mix it up, and do a third four to six weeks for up to 18 weeks total.

FLEX: Do you ever deviate from the plan?

Flex Lewis: When Neil is in town he dictates what we do. However, I do a lot of traveling, so it’s virtually impossible to stick to a strict training regime. One day I could be training in an L.A. Fitness–type gym and the next in a real hardcore bodybuilding dungeon. My mindset is always to have a phenomenal workout regardless of the situation, regardless of the time, the location, the gym, whatever jet lag I may have. I make do with what I’ve got and the tools available to me.

There are some guys I’ve been around, their way of thinking is: “Shit! I’m out of my gym, so I have to train easy to maintain.” I can agree with that to a certain extent, because we do get used to our creature comforts, our strict meal plans, having our bodies functioning in a certain time zone. But all that aside, the true champion from the time of Arnold to today makes do with what is available to him and repeats his wins. It all comes down to your mindset and what you’re willing to do with what you have.

FLEX: What if you’re having one of those days when you just don’t feel like training?

Flex Lewis: There have been occurrences of old where that’s happened, but that’s a rare occasion. I start my day knowing what I’ll be training, and it’s a commitment regardless of how shitty or how great my day has been. The body part that is going to be trained is the body part that is going to be trained. I don’t have a set Monday/chest, Tuesday/that routine week in and week out, because traveling takes its toll. What I do is, if I know I’m leaving and have a two-day trip just to get to Australia, I’ll combine four days of training back-to-back, whereas usually I like to have three days on, one day off, followed by two days on and one day off.

Flex Lewis: Personally, I respect a humble champion, someone who is confident and knows where he stands in life and onstage. I think a lot of people lose sight of that as soon as they get one or two wins under their belts. Maybe not as one pro to another pro, but definitely when they get in front of the fans and the media. I love [MMA fighter] Georges St-Pierre. When he was a champion he was a humble champion. I always appreciated that. I’m aware that the respect factor can be taken away fast, because I’ve seen it happen to athletes I once admired.

FLEX: The things that make you a champion bodybuilder would make you a bad rapper because you don’t like to brag.

Flex Lewis: Now that I’ve got the title I find it’s like I’m expected to have the cockiness. But that’s not me. My mother is the first person who’d kick my ass if I changed, and I’m not going to f–k with that woman! Joking aside, I’d rather be a champion doing what I need to do on- and offstage. Shaking the right hands in front of the camera and then shaking the hands of the people who will never be seen behind it.

WEEK 2: Add an isolation exercise to the two to three compound exercises; two to three sets of each for 10 to 14 reps.

WEEK 3: Exercises similar to Week 2, but exercises are typically done for one set, and rep ranges vary from 14 to 30 or more reps; incorporating dropsets, giant sets, rest-pause, and supersets.