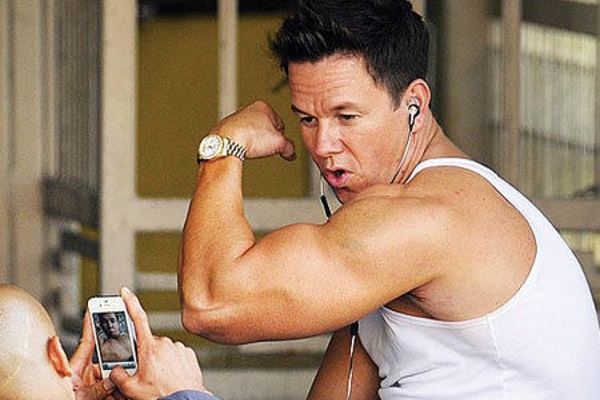 Three different ways to get a body like his, straight from the source.

Mark Wahlberg is famous for his transformations; that is, his transformation from a Boston kid with eight siblings to a 90s rapper and underwear model to a clean-cut family man (and hugely successful movie star). The one thing that’s been consistent through these incarnations? His toned, muscular body. With massive biceps, tight abs and a big chest, he embodies the ideal for many men.

After four cover shoots with Wahlberg, we’ve pulled together a few different ways you can get a body like his—with moves and tips straight from the source.

There are seven moves total. You’ll be performing three sets of each one, with a heavier weight each time. For the first set, start with a heavy weight and do 10 reps. Then, for the second set, add some weight but cut down to eight reps. For the third and final set, you’ll be doing just six reps, but at the heaviest weight. Try adding on 10 pounds for each new set, jumping from (for example) 45 pounds, to 55 pounds, to 65 for the last few. This workout is all about gains, and works out all your angles for noticeable changes in your biceps. Still, it’s not for beginners, so be sure to proceed with caution.

Wahlberg had just gained 30 pounds for a “fat scene” in The Other Guys when he got a call saying that the team from boxing biopic The Fighter needed him to come re-shoot a few fight scenes. After living on bottles of wine and whole boxes of donuts for his new role, he had just five weeks (negotiated up from the original three) to get back into fighting shape. He called in trainer Brian Nguyen for the fix. Workouts for The Fighter were an intense commitment, of course. But even if you don’t have four hours to spare, you can follow the same layout and see results.

Part 1: Warm-Up. First thing’s first, for Wahlberg, and that means foam-rolling and stretching. During the peak of his training for The Fighter this meant an hour of foam-rolling and massage with Nguyen to stimulate deep tissues, followed by an hour of dynamic stretching to boost mobility. For those of us who don’t have four hours to work out? A commitment to warming up will still make a huge difference in your performance, even if you only have twenty minutes.

Part 2: Circuits. The trick to this workout is establishing short, fast rounds with only just enough time to recover in between. Each round will be three-minutes long, followed by a minute of rest. True to form, jump-roping was a big source of cardio in the prep for this role. Wahlberg would also incorporate sprints up and down the court. As for strength, you can bring in body-weight exercises that will keep your heart pumping. Nguyen likes burpees and side-planks, as well as kettlebell swings. Keep up the pace for 45 minutes to really see results.

Part 3: Sparring. Every workout ended with four to six rounds of sparring with Nguyen, again with only short rests in between. Like the circuit portion of the workout, sparring works both cardio endurance and strength.

When we first checked in with him, Wahlberg was taking two off-days a week. But when we say “off” we don’t mean sitting on the couch. Instead, Wahlberg makes time for his other passion: golf. The sport is a strange choice for an ex-rapper who grew up in a Boston neighborhood that’s been home to wave after wave of immigrants from since the seventeenth century. But Wahlberg can’t get enough of it, and in the fifteen years since he’s started playing, he’s become known as one of the best celebrity golfers.

So even with an intense gym schedule, he’s staying active on his off-days, making use of his physique for more than just the big screen. This active lifestyle is proven to ward off all kinds of health threats, and keeps the metabolism going even when you can’t make it to the gym.