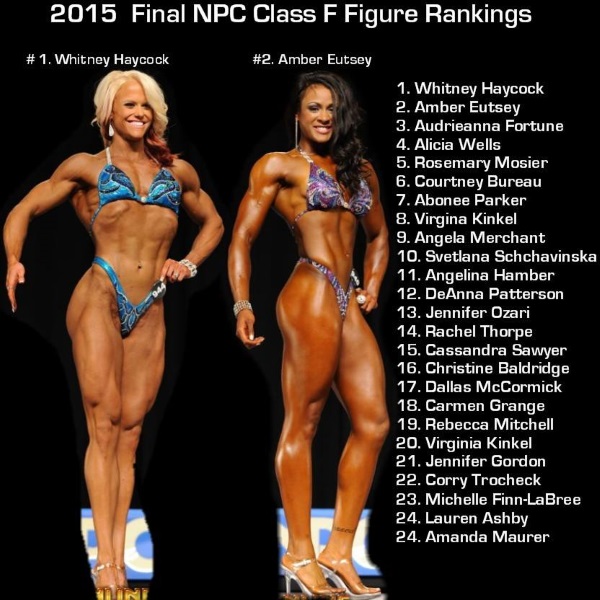 Some kids grow up knowing exactly what they want to become, who they want to be, and what they want to do in their adult lives. Others of us really had no idea in what direction we wanted our lives to head. Instead, we just made something up. In my case, it was something noble (speech-language pathology), but I mostly just settled on that path because I was going to college and I needed to make a decision. Luckily for me, I discovered who I truly was in those first few years of my collegiate career and I was able to make some life changes. Here begins my competitive bodybuilding-figure “career.”

To make a long story short, I lost 27 lbs. of fat in my first year of college. I went from 33% body fat to 22% in less than a year all because my roommate was able to get me in the gym, and I decided that I no longer wanted to live in a body that I was unhappy with. Shortly after my weight loss, my now coach, CJ Jackson, approached me about competing in the figure division of bodybuilding. I was taken aback. First off, I had never spoken to the man before; I’d only seen him on numerous occasions in the gym. Secondly, I didn’t know that he was a bodybuilding coach, nor did I know what bodybuilding really was. But I did know one thing, my now friend and teammate and then college acquaintance, Jordan Janowitz, was training to become a competitive bodybuilder (whatever that meant). So I talked to him a bit about it and was convinced that I should give it a try.

Prep Season: round I

A few months later, I began a 12-week cutting phase to step on stage for my first show. I was successful for nearly 6 weeks before I broke down and quit (which is something I previously did often). I remember texting Jordan in my moment of weakness and telling him that I couldn’t handle the diet. Coming from being an obese child and living in a house with a plethora of snacks to “downgrading” my diet to lean proteins, veggies, sweet potatoes, oatmeal, and eggs were probably the most difficult thing I’ve ever done. Giving up milk was the hardest food hurdle, believe it or not. Anyway, Jordan comforted me by saying that he ate a Snicker’s bar the day before. I felt better when he told me that. For one day, I felt better. The next day I quit, but what else was new?

Six months later I decided to try again. If not for anything else but to prove to myself that I could do something tough without quitting. But I didn’t do it alone. I selfishly recruited my roommate/best friend, Emily, to do the prep with me. I say “selfishly” because I was fairly certain that I could do it if someone else was doing it with me. I was right. We went through an 11-week cut to compete at our first show in Rochester Hills, MI in the NPC Novice Michigan competition. It was a rush. The entire experience was exhilarating. From learning the posing (and doing it wrong) to dieting, working out differently, even to purchasing the shoes and suit…AND the tan! Jeeze what is that? I didn’t understand the tan at first but we certainly did need it. We both ordered ProTan’s self-application spray and went through the layering process.

So what happened next? Well, I placed 2nd out of 3 and Emily placed 6th out of 9. We didn’t know what we were getting ourselves into and although we took the process seriously, we weren’t ready to step on that stage. But it was a learning experience. I never quit so easily again and she challenged herself to a much different lifestyle, and we’ve grown since then.

So What Does This Mean Now?

Well for starters, be prepared and do your research. It seems like just about every consistent gym-goer wants to compete now, which is great, but just like Emily and myself, many of them have no idea what they’re in for. Don’t make a mockery of the sport, and do take it seriously. Everyone has different reasons for why they decided to first compete and those of us who are highly invested don’t take mockery lightly.

Ladies, a few tips for your competition:

1) witness a show before you decide to step on stage, and be sure to become familiar with the various divisions. Know your body type. Many competitors compete in a specific division because their natural frame fits the mold for that division. For example, I compete in figure because I have a v-shaped torso, broad shoulders, and small waist. Don’t choose a division just because you like the posing, because you may not fit that division’s body proportion criteria. You’ll be wasting your time.

2) Watch videos of top athletes in the division you’re interested in. Learn the poses, learn the transitions. It doesn’t hurt to go to a posing clinic or to hire 1-on-1 help to learn about what you’re supposed to do when you get up there. There’s plenty of help out there. You just have to be willing to look and ask.

3) Don’t stress about the diet. Depending on who you’re working with or what plan you’re following, you will more than likely get some sort of cheat meal. Cheat meals are golden. They give us something to look forward to during our journey. Remember that you’re not the only one struggling. It’s good to reach out to friends or even forums for a little encouragement. It’s not the rest of your life. It’s only a few weeks, then you can start to incorporate some of your favorites back into your diet.

4) What are you wearing on stage? Make sure you have the correct suit for the division. Wearing the wrong suit is truly unforgivable. There’s no reason for anyone to have on a bikini suit if they are competing in women’s physique. Again, how serious are you? Do your research. Shoes!! We love shoes! Wear the correct ones though. Clear (some may have a bit of white) heels, with or without straps. 4 to 4.5 inches tall are ideal. Who are you trying to impress? We aren’t strippers. 7, 8, 9-inch heels are ridiculous. Just don’t. As far as hair, makeup and nails go…you want to stand out but you don’t want to be clownish. Your makeup has to be bold to be visible to the judges and the audience but don’t overdo it. Again, research. What do the pros look like? What looks good on your skin tone? Nails and hair vary. Just make sure they look nice.

5) Please, please, please don’t forget to tan! People make fun of us for this but it’s essential to the sport. Dark skin makes the muscles more visible.
Especially under those harsh lights. With that being said, cheaper isn’t’ always better. Tanning boutique spray tans do not equate to stage ready spray tans. Bottled self-application tans, in my opinion, do not work. You have to apply a ridiculous amount of layers just to become a touch darker. Not worth the time and effort. And whoever you recruit to apply it will be irritated. Just pay the extra money to have a professional organization spray you. One with the sole purpose of tanning competitors. These tans are dark. They typically only require 2 coats, they’re pretty quick, and they wash off. PERFECT! Use one of those businesses. Trust me! You won’t regret it. Along those same lines…SHAVE! For the love of whoever you believe in shave, wax, Nair, etc. your entire body. Ladies, please take care of that bikini line. Yes, we the audience can see where the spray tan collected in your tiny pubic hairs. It’s unflattering, to say the least.DkY1tda

For all of you aspiring competitors, just remember a few things:

1) don’t let people get into your head. Whether you’ve dreamt of competing in this sport your entire life or whether you just learned about it, aim to
achieve your goal. People may talk down on you for knowing very little about the sport at first and for just realizing your new dream but don’t let their negative attitudes affect you. Go for it!

2) Do your research. On everything! And make sure you attend at least one show before you step on stage yourself.

3) Don’t waste anyone’s time. Stay on track. Don’t give up. Reach out to others for support. And be confident.