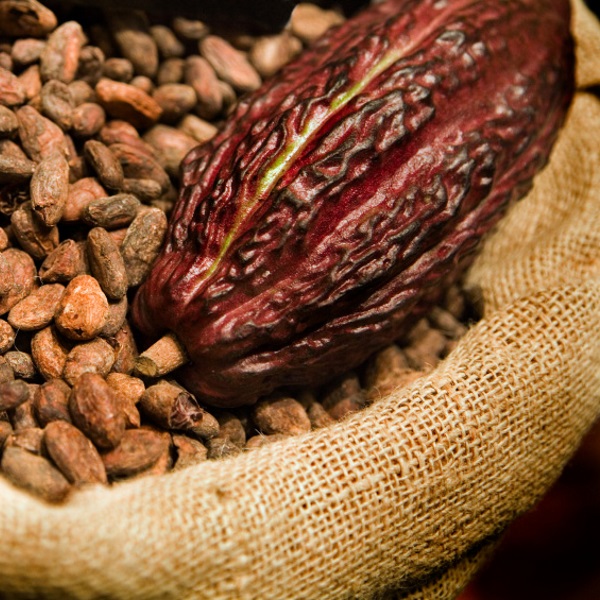 Cocoa contains a compound that boosts the positive effects of endurance exertion. Researchers at the University of California gave (-)-epicatechin to mice that walked fast for half an hour a day on a treadmill and observed that the mice’s stamina increased dramatically. So does cocoa boost the effectiveness of condition training?

(-)-Epicatechin
Catechins are also called flavan-3-oles. In 100 g of dark chocolate you’ll find 50 mg catechins; a 250 ml cup of tea contains 35 mg. Their basic skeletal structure is shown below. And below that you’ll see the structural formula of (-)-epicatechin. The substance is found in cocoa. Many of the positive cardiovascular effects of cocoa are due to (-)-epicatechin. [Proc Natl Acad Sci U S A. 2006 Jan 24; 103(4): 1024-9.] The compound makes blood vessels more flexible because it boosts the production of NO in the blood vessel walls.

The researchers are interested to know whether there are nutrients that keep muscles fit for longer as we age. Muscle cells depend on their mitochondria for their energy supply. These are molecular power generators that convert nutrients like fatty acids into energy molecules for the cell to use. As we age, the number of mitochondria in our cells declines, and the quality of the ones left over declines too. An active lifestyle can combat this effect.

The catechins in cocoa boost the production of NO, and many substances that have the same effect are found in sports supplements. NO plays a key role in hypertrophy. Whether catechins in cocoa have a positive effect on muscles has never been studied – which is why the researchers decided to do so.

Results
After 15 days the researchers measured how long the mice could keep going for until they were exhausted. They discovered that supplementation with (-)-epicatechin in both the active and non-active test animals had raised their endurance capacity by about thirty percent.

The catechin had boosted the production of blood vessels in the muscles, as the figure above shows. As a result, the muscles had a bigger supply of oxygen and nutrients. Perhaps even more important was what the (-)-epicatchin had done to the mitochondria: the supplement resulted in an increase in the total quantity of energy generated by the mitochondrial proteins.

Conclusion
“These results indicate that (-)-epicatechin may potentially exert exercise mimetic effects when taken alone, but also provides a synergist effect when combined with exercise”, the researchers conclude.