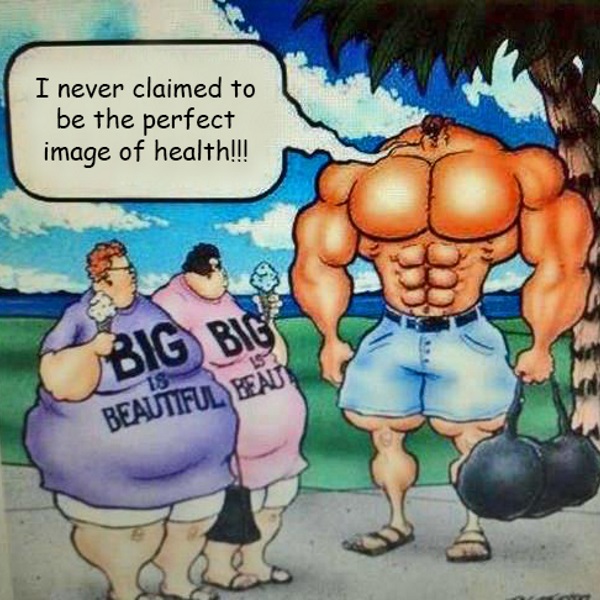 One of my favorite things about the Internet fitness world is how much I learn every day. Last week I learned from an evidence-based infographic that I don’t have a six-pack because I’m not willing to sacrifice and #riseandgrind, which means I’m probably an impotent husk of a man incapable of satisfying my non-existent girlfriend (who is probably non-existent because of said lack of six pack).

Or earlier today, in a powerlifting group, I learned that powerlifters never get injured because (and I quote), “We aren’t pussies.” Scientific!

Then I learned that just lifting weights won’t let me survive a zombie apocalypse (a major concern in my day-to-day life), and if I don’t bow down before the altar of all-holy movement by “exploring and playing,” I will stunt my journey to physical enlightenment due to lack of neurophysiological evolutionary superiority.

Unfortunately, I can’t even take the time to focus on my movement-evolution-revolution because I’m too busy trying to change my blood pH (since apparently your kidneys and lungs aren’t a thing) and finesse my paleo diet so I can justify some bastardized version of fried chicken made with artisanal farm2table almond dust and sustainable, free-range, high-school educated chickens.

Most of the industry vets can see this stuff for what it is. This article isn’t really for them. The people I want to talk to are the young coaches propagating this nonsense and the people it affects most: i.e., the people.

Everybody’s Got a Story

Storytelling is a fundamental human trait. From humans gathered around campfires and cave drawings to modern day Netflix binges and Snapchat, stories are part of who we are. Even in fields like history and science where the story is supposedly objective and “real,” the truth is that narrative biases exist.

Much of what we think constitutes “reality” is an aspect of our personal narrative or the product of someone else’s.

Some of you are probably wondering why the hell someone is talking about the function of a narrative on a fitness website. The answer is because, simply put, narratives are everything. The idea of a personal narrative is a powerful psychological concept that drives and informs every aspect of development.

Frequently when I broach this subject, the reactions are some variation of, “So you’re saying it’s all in my head?” Kind of. It’s not so much that reality doesn’t exist or matter. The more important takeaway it is that you control your perception of reality. It’s not meant to be an insult. It’s empowering. Yes, your reality is just a story. But guess who’s holding the author’s pen?

So what’s the narrative when it comes to the fitness industry? It’s popular to say that the industry story is that we’re broken, and failing the public we claim to serve. That argument implies that the health of the entire country is the responsibility of the fitness industry. The idea that we are supposed to be the ambassadors of healthy living to a fat, sick, and dying society is just silly. Most of us are not doctors. Plenty of excellent coaches don’t even have a college degree. So how can we heal the unhealthy when our first instinct on encountering pain is to refer to another more qualified professional?

Stop Telling People What To Do

Then there’s the narrative that says embracing a fit lifestyle has an evolutionary or real-world imperative. I bought into that story for a long time. My brother has been a smoker since high school, and when I was younger I gave him hell about it. I leaned on a lot of the stock tropes the fitness industry doles out because I was basically on a Kool-Aid IV. Trouble is, all it ever did was make him upset and think I was judging him. And he was right.

In hindsight, I can see that while his smoking habit is probably foolish and detrimental to his health, to extrapolate that to his quality as a human being is preposterous. He’s a speech-language pathologist who spends the majority of his time helping people with traumatic brain injuries re-learn how to communicate with their loved ones. Do I wish he had a healthier outlet for stress? Sure. Do I automatically get the higher moral ground because I work out every day and meal prep? Not a fucking chance.

There Isn’t One Perfect Tool

One of the funniest realizations you come to as an adult is that we never really escape the social dynamics of high school. No matter how old we get or how mature we become, society will always be overly concerned with group think and what the “cool kids” are doing. Now that we’re all grown up, the cool kids are “celebrities,” and instead of arguing about which artist really understands us, we battle about politics and economic policy.

In the fitness world, we argue about cardio versus weights, with the same juvenility.

Imagine a conversation in which a carpenter extols the virtues of the hammer. “Sure,” he says, “screwdrivers and nail guns are cool, but they’re only fancy re-inventions of the hammer. Just get yourself a good hammer and you’ll be set.” Implausible, you say? Of course it is, because any carpenter can tell you that the job determines the tool, not the other way around.

There’s always a humorous glut of people trying to tell us the one type of exercise we should do. But as far as the research is concerned, if your goal is to be healthy and live a long life, your exercise of choice would probably look like a combination of several things: a moderate amount of long, low-intensity cardio, some higher intensity stuff (but not too much), and some basic, whole-body strength training utilizing compound exercises through full ranges of motion. This could all be accomplished in 3-5 workouts a week, none of them more than an hour. Go for a few long walks at a brisk pace and do some squats, deadlifts, and presses 2-3 times a week.

You Don’t Need to Fit In

I’m a weirdo. Always have been. When I was a kid, fitting in didn’t come naturally to me for a number of reasons. I dealt with my fair share of issues, but I decided at a young age that if I couldn’t fit in, I wasn’t even going to try.

This article is not for those who want to wail about how the industry is “broken,” or for the vets who already know shenanigans when they see them. This article is for the new professionals. Even more, it’s for the people out there who are just looking to get into fitness and don’t know where to start.

My message is this: Why should you take the advice of any group of people that wants to alienate and ostracize you? What is there to gain? Why would you want the approval of a bunch of small-minded jerks? Far as I can tell, their answer is, “Because we said so.” But their narrow definitions of health and fitness don’t have to be yours, and neither do their methods.

Being different can be difficult, or it can be liberating. Just remember, it’s your narrative. You get to write the story.