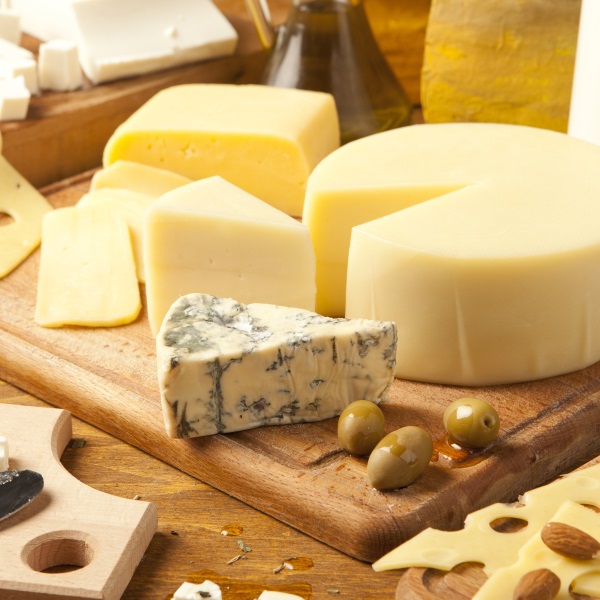 Cheese is not exactly the first food that comes to mind when we think about “healthy eating”. Rightly so? Today’s overview of recent cheese studies tries to answer this question.

The article will, among other things, also address the claim that cheese was addictive (see red box) and / or that the consumption of a dairy product with a saturated fat content that is second only to that of butter would harm your cardiovascular and metabolic health.

So, where do we start? Netherlands? Well, even though the Dutch are famous for the many different types of cheese they produce and consume, they are probably not the ones who “invented” it. Rather than that it appears to be certain that the first cheeses were produced 5,000 BC – accidentally.

Back in the day, humans had not invented pottery and thus stored their foods – including their milk – in animal stomachs, … stomachs the cuagulating enzyme content of which turned milk into curd during storage (Fox. 1993). The first recorded “production” of cheese, in that case Gorgonzola dates back to the year 897, however (see Table 1).

Another cheesy fact about the Netherlands is that the Dutch would be the world’s #1 cheese producer and consumer. Both is not the case! Rather than that, France holds both the title of the greatest producer (1.3 m tonnes) and consumer (22kg / per capita | Fox. 1993 // relative to their total dairy consumption, the Italians are the kings of cheese w/ up to 28% and 33% of the dairy intake from cheese of women and men in the province Ragusa | Hjartåker. 2002). It is thus also France, where we will probably find the most significant evidence with regards to the health effects of cheese consumption. The most prominent study investigating this issue comes from the Aarhus University (Zheng. 2015)..

Is cheese the reason for the “French paradox”?

In said study, Zheng et al. used an NMR-based metabolomics approach “to investigate the differentiation between subjects consuming cheese or milk and to elucidate the potential link to an effect on blood cholesterol level” (Zheng. 2015). To this ends, the researchers recruited fifteen healthy young men for a full crossover study during which all subjects consumed three isocaloric diets with similar fat contents that were either (1) high in milk, (2) high in cheese or (3) contained only limited amounts of dairy for 14 days. 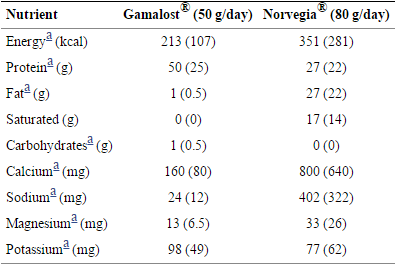 Only the fat “Norvegia” gouda has cholesterol-lowering effects in an 8 week RCT (Nilsen. 2015).

Question 1 – Does the type of cheese matter? High fat may matter. Well, “fake cheese” that’s made from vegetable oils + tons of additives, as you will find it on most frozen Pizza from the supermarket is obviously not an option, but even among “real” cheeses there appear to be differences in terms of their individual health effects. The results of a 2015 study from Norway, for example, show that only fat gouda (80g/day), yet not fat- and salt-free Gamalost, a traditional form of Norwegian cheese will significantly reduce elevated cholesterol levels in non-medicated men and women over 18 years of age (Nilsen. 2015).

As the data from the scientists urine and feces analyses shows, the cheese diet significantly reduced the urinary citrate, creatine, and creatinine levels and significantly increased the microbiota-related metabolites butyrate, hippurate, and malonate compared to the milk diet. Overall, the study shows…

“[…] that cheese consumption is associated with an increased level of SCFAs in the gut, possibly induced by stimulation of beneficial gut microbiota, as well as an increased extent of lipid excretion with resultant beneficial effects on cholesterol metabolism”(Zheng. 2015 | my emphasis).

In conjunction with the significant reduction of the subjects’ TMAO production [Trimethylamine N-oxide has been associated with increased CVD and even cancer risk] of which the authors rightly say that it could “also contribute to potential beneficial effects of cheese intake on the risk of CVD” (Zheng. 2015), the results of this controlled human trial are in stark contrast to the cheese = “high cholesterol” = “bad for your heart” myth that’s still so prevalent:

“Overall, this metabolomics study suggests that cheese could be an important piece in the French paradox puzzle. However, further studies are needed to explore the exact metabolic mechanisms linking cheese consumption, stimulation of the gut microflora, and cholesterol metabolism” (Zheng. 2015 | my emphasis)

Just as many other researchers working in this area, Zheng et al. received support for their study from the dairy industry – a factor that is as prevalent in other areas of nutrition research, but interestingly most heavily criticized for dairy (Armstrong. 2005) and, obviously, artificial sweeteners. 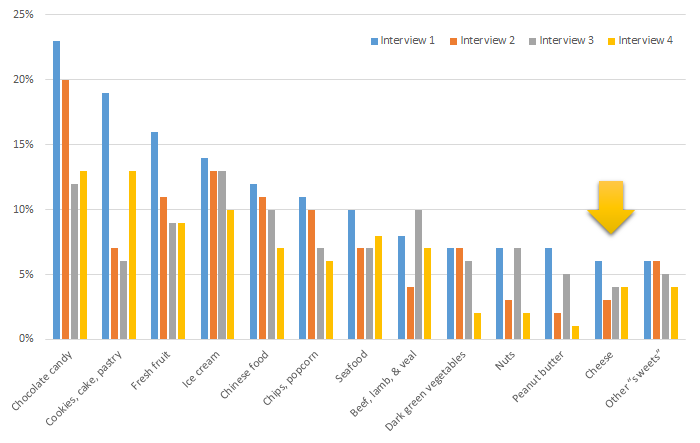 Percentages of women reporting a craving for a given food at four different timepoints during their menstrual cycle (Rodin. 1991).

Question 2 – Is cheese addictive? Prolly not! Even though the whole concept of food addiction is still contested (Rogers. 2000; Corwin. 2009; Albay-rak. 2012; Ziauddeen. 2012; Hebebrand. 2014), the Internet is full of “information” about the addictive nature of cheese. Claims that are not really backed up by science, as the data from Judith Rodin et al.’s study of the food cravings of women during different phases of the menstrual cycle in the Figure (left) shows (Rodin. 1991) – the real world does thus not confirm the relevance of the theor. addictive potential of casomorphines (Freye. 2004).

In general, rather than a role for individual molecules, the existing data appears to suggest “addictive”, or rather hyperpalatable foods share common macronutrient compositions that distinguish a dairy queen chocolate ice cream cone with 34 g sugar 10 g fat and 160 mg sodium (+22 extra ingredients) per serving from roasted chicken breast or an apple (Gearhardt. 2011). This does not exclude that you can be “addicted” to cheese, but the same goes for carrots of which Kaplan reported 10 years ago that they got a 49-year-old woman addicted (Kaplan. 1996).

The reasons why I would argue that you can still put faith into the accuracy of the results Zheng et al. present in their paper are: (1) they openly declared the funding, i.e. support by The Danish Council for Strategic Research, Arla Foods, and the Danish Dairy Research Foundation in the project “FIAF – Milk in regulating lipid metabolism and overweight. Uncovering milk’s ability to increase expression and activity of fasting-induced adipose factor” (10-093539) and (2) the supporting evidence from various previous studies:

Beneficial effect on CVD health – “The majority of prospective studies and meta-analyses examining the relationship between milk and dairy product consumption and risk of CVD show that milk and dairy products, excluding butter, are not associated with detrimental effects on CVD mortality or risk biomarkers that include serum LDL-cholesterol” (Lovegrove. 2016). 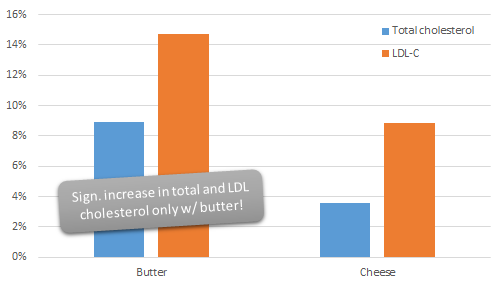 Figure 1: Unlike 40 g dairy fat from butter, 40g of fat from matured cheddar cheese do not sign. affect the levels of total cholesterol and LDL in a 4 weeks cross-over study in healthy subjects (Nestel. 2005).

With the latest evidence for this claim coming from an impartial source, namely Iran, where Sadeghi et al. found that higher cheese intakes are are associated with 19% reduced risk of metabolic syndrome and 13% reduced risk of suffering from (too) low HDL-C level, one may still doubt the objectivity of this claim being made at a conference about animal products, but can hardly argue that there was only potentially biased research to support Lovegrove’s claim and the conclusions of the latest meta-analysis of its effects on blood lipids (de Goede. 2015):

In addition every regular gouda (and many other classic cheeses) contains peptides that have proven to have anti-hypertensive effects (Saito. 2000) and will thus lower the #1 risk factor for stroke and related cardiovascular problems – including death (Fagard. 2008). 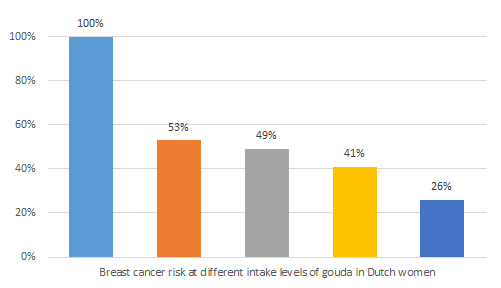 What is also interesting about the effects plotted in Figure 2 is that a similar beneficial effect was not observed for milk (had no negative effect, either) or similarly low intakes of other fermented dairy (van’t Veer).

Anti-NAFLD and prometabolic effects – At least in comparison to a butter-fat based diet a similarly low fat (20%) likewise AIN76 (that’s std. rodent chow) based diet with freeze-dried cheese powder significantly reduced the accumulation of triglyceride and cholesterol in the liver (P = 0.016 and P < 0.001, respectively) of rats who received the cheese or control diet in a 9-week study. 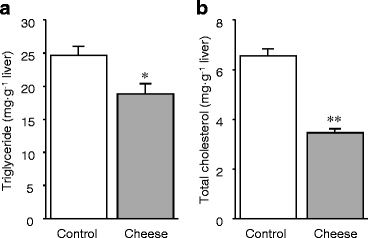 Just like the previously reported human studies, the rodent study als found significant increases in HDL and decreases in non-high-density lipoprotein (non-HDL) cholesterol, as well as elevated levels of metabolically healthy serum adiponectin concentration at week 9 in rats fed the cheese diet. To which degree this effect was due to or related to the increase in fat excretion in the feces will have to be determined in future studies. What appears to be clear, though, is that these “results suggest that cheese mediates various beneficial effects for preventing the development of metabolic syndrome by suppressing the accumulation of fat in the liver” (Higurashi. 2016).

High nutritional value – Cheese is a low carbohydrate food that’s packed with high concentration of essential amino acids saturated fats that could be good, not bad for your health (e.g. conjugated linoleic acid and sphingolipids present in cheese may have anti-carcinogenic properties, too), a lot of highly bioavailable calcium with beneficial effects on bone, teeth, blood pressure and weight loss (when combined with low-energy diets). Reason enough for researchers to state that “[c]heese is an important dairy product and an integral part of a healthful diet due to its substantial contribution to human health” (Walther. 2008).

Whether the average young, whites, female knows all the above or whether there’s another reason that this part of US society consumes the highest amounts of cheese (Glanz. 1998) is something I cannot tell you. What I can tell you, though, is that the previously presented evidence suggests that weight concerns should not, as they still were in 1998 in the US (Glanz. 1998), be a reason for you not to consume cheese (in controlled amounts). Rather than that you should follow the example of the rich and intelligent of which a more recent study shows that they tend to consume the most cheese in Europe (Sanchez-Villegas. 2003). 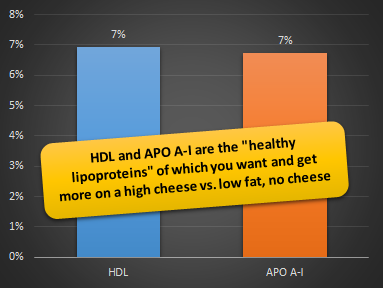 A high cheese will also increase the level of the “good lipoproteins” HDL and apo A-I (Thorning. 2015a).

Bottom line: Don’t get me wrong. The purpose of today’s article is not to promote a “cheese only diet” or to tell you to consume at least X amounts of cheese per day. It is rather meant to critically evaluate the irrational fear that still characterizes the relationship of many health-conscious dieters to (esp. fatty) cheeses.

When consumed in moderation, cheese is not just a highly nutritious food, but can, as a lot of the more recent studies indicate, even have beneficial effects on your cardiovascular and metabolic health that are probably mediated by key nutrients and the beneficial effect cheese will have on your microbiome