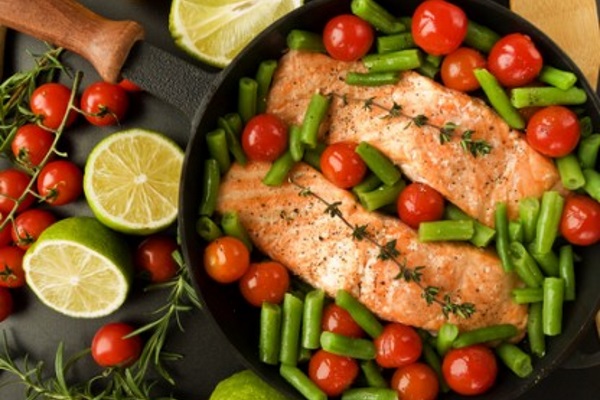 Weight loss with cardio exercise goes faster the more protein your diet contains, and the less fat and carbohydrate. Dutch scientist published this in Physiology & Behavior.

That a high-protein diet works well for weight loss is old news, but this study throws more light on the mechanism behind this. The researchers did an experiment with 16 subjects: 12 of them were put on a three-month diet that contained relatively more protein, and 4 kept to their usual diet.

The protein-rich diet didn’t require much change in eating habits. The subjects replaced three normal meals a day with a milkshake, a pudding and a soup or muesli, all from Novartis’ Modifast products. These contain a bit more proteins than regular foods.

Immediately before and after the three-month period, the subjects had to cycle on an empty stomach first thing in the morning. The researchers gradually made the subjects cycle increasingly fast and measured how much fat they burned. The figure below shows the results of these tests.

The fat burning was highest at 51 percent of the VO2max. That’s on the low side, but not unusual for untrained individuals. During the test [Fatmax], the maximal fat burning rose in the group that had eaten more protein for three months. This group did not become fitter, though.

We have shaded the statistically significant effects in the table above. In bodybuilding terms the increase in protein intake was minimal, but it had a considerable effect on body composition.

The researchers suspect that the protein-rich diet increases muscle mass. Resting muscles use fat as their main fuel. This explains why the fat mass is reduced, partly at least. But, this study suggests, there seems to be another way in which a protein-rich diet raises fat burning: active muscles burn more fat if you consume more proteins.

Our theory: the amino acid leucine in the extra proteins provides an anabolic stimulus. Leucine forces the muscle cells to save protein, and possibly to some extent glucose too. That’s why active muscle cells burn slightly more fatty acids with low-intensity exercise.