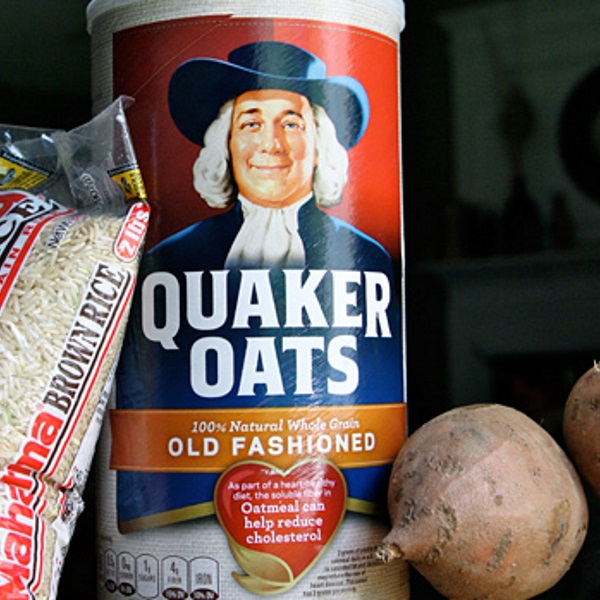 Carb Cycling Is Hogwash. Do It Anyway.
There’s a lot of hype about carb cycling, and many claims are being made about it that are yet to be substantiated. The idea that alternating between high and low-carb days will accelerate fat loss is, well, hogwash. The truth is, any diet that causes you to expend more energy than you consume, whether it’s daily or even weekly, will result in weight loss. That said, there are some practical ways of using this method for burning fat while preserving muscle and strength.

How Carb Cycling is Supposed to Work
Carb cycling is basically just planned changes in carbohydrate intake in order to accelerate fat loss and/or avoid weight loss plateaus. The traditional approach has you rotate through high-carb, moderate-carb, and low-carb days while protein intake remains unchanged. Fat intake becomes low when carbs are high, and high when carbs are low.

The idea is simple:

Despite the studies, there are a couple of strategic ways to implement carb cycling that allow you to retain more of your strength, preserve muscle mass, and keep your energy up during a fat loss phase. Pretty valuable benefits, right?

Smart Carb Cycling
Let’s first look at an example of what your macronutrient breakdown might look like and then we’ll dive into how you can structure carb intake for maximum performance and muscle preservation.

Step 1: Find Your Macronutrient Breakdown
Protein: Maintaining muscle mass while restricting calories requires an adequate protein intake. Although the science is pretty clear that we don’t need more than about 0.8g per pound of bodyweight to build muscle, a study conducted by AUT University concluded that energy-restricted athletes will need a bit more.

Their conclusion was that you need about 1 to 1.2 grams of protein per pound of fat free mass to maintain muscle tissue. The leaner you are and the longer you’ve been restricting calories, the higher up on the scale you should go. The opposite is also true – someone with more body fat who has been dieting for a shorter period of time can get away with a lower protein intake.

Now, most guys who simply use “bodyweight x 1” will land in an acceptable range. But if you want to get more detailed, see the example below.

Fats: Consuming 20-35% of your total calories in dietary fat is more than enough to get the benefits of a healthy fat intake. This equates to about 0.3 to 0.4 grams of fat per pound of bodyweight.

Carbs: A physically active person should never avoid carbs. Carbs are our body’s main source of energy and are in fact inefficiently stored as body fat, even when overfeeding. You should consume as many carbs as your calorie intake will allow while remaining in a deficit. A good starting point is about 1 to 1.5x bodyweight in grams of daily carbs.

Step 2: Break Carbs and Fats Down into Weekly Intake
Using these examples, a 180-pound man would start off at 180g of protein, 72g of dietary fat, and about 225g of carbs per day. This equates to a little under 2300 kcal per day and about 16,000 kcal per week. And as long as we can ensure we’re consuming that amount or less (and are in a deficit), we’ll lose fat, despite how fats and carbs are distributed throughout the week.

This means we’ve got about 500g of fats and about 1575g of carbs per week to play with. The idea is to manipulate intake while staying within these numbers to maximize performance in the gym. The better we perform in the gym, the less likely we are to sacrifice muscle tissue. And we know from research that the best way to maximize physical performance is to consume an adequate amount of carbs.

If your program is periodized in a linear fashion where you’re not alternating intensity, use your high-carb days for sessions where you’re performing the most strenuous lifts (deadlift, squat, etc.).

The way you’ll distribute your carb intake is quite simple: 50% of your weekly intake for heavy sessions, 35% for medium sessions, and 15% for rest days.

For example, if your total weekly carb intake is 1575g and your program prescribes two heavy sessions, then you’d split 50% of your carbs (788g) into two days (394g). 35% of your weekly carb intake (551g) would be broken down into two days (275g) to fuel your medium training sessions, and the remaining 15% (236g) should be distributed evenly throughout your three rest days (78g).

Once you’ve figured out what your low, moderate, and high carb/fat days will look like based on your individual needs and training program, using carb cycling to maximize performance in order to preserve muscle mass on a cut becomes a breeze.

If You Train in the Morning
The whole premise behind carb cycling to maintain or improve strength is to have full glycogen stores when you need them, which is during your most intense training bouts. But what if you rested the day before and went low carb? What are the chances you’ll be primed for a heavy morning session? This is why if you train in the morning, you should go high-carb the day prior to your most intensive session(s).

Here’s how a morning lifter who follows a 4-day training split might cycle his carbs around heavy sessions, medium sessions, and rest days.

If You Train in the Evening
A more traditional approach to carb cycling would work best here. With your workout being later on in the day, you’ve got plenty of time to fill up on enough carbs to fuel your training. In your case, consume 75% of your daily carbs before your workout and save the remainder for the rest of the day and night.

Here’s how an evening lifter who follows a 4-day training split might cycle his carbs around heavy sessions, medium sessions, and rest days.

If You Train in the Afternoon
Here you’ll cycle carbs a bit differently. First, consume a moderate amount of carbs the day before your heavy training session. Second, consume about 50% of your daily carb intake before an intensive workout.

And if you haven’t figured it out already, those who train in the afternoon (and have time to get a good amount of calories in before training) won’t necessarily need a high-carb day and instead may benefit from more frequent moderate carb days. However, if you train in the afternoon but are unable to fit in enough calories pre-workout, follow a similar structure to the morning lifter.

Here’s how an afternoon lifter who follows a 4-day training split might cycle his carbs around heavy sessions, medium sessions, and rest days.

Not for Everyone
This type of carb cycling isn’t for everyone. If you’re bulking up or overfeeding, alternating between low carb and high carb days isn’t necessary, nor does it have any benefits over keeping your calories consistent. However, if you’re someone who’s been cutting for a prolonged period of time and are beginning to feel the effects of lower energy in your training, give it a shot.