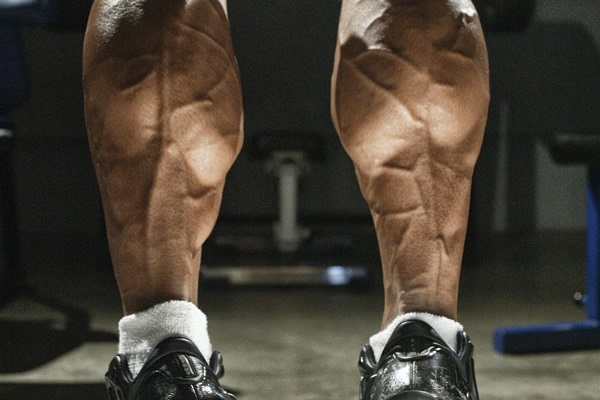 My calves suck. I will always view them that way. I’m 6’2” with exceptionally long femurs, giving me a great disadvantage for possessing XL bulls. Arnold had the same issue, along with many bodybuilders over 6 feet, or just possessing poor genetics for calves. It’s just how we’re structured. We’re great with most pull work, as in deadlifts or rows, but for some, the legs/calves can sometimes lag embarrassingly.

With this protocol, I have seen improvement since a year ago when I got sick of the way they looked. I’m a bodybuilder and if the calves are outdone by the thickness of your quadriceps and shape of your hamstrings, it looks off. Not to mention that if you walk on the beach or wear shorts, you’ll feel self-conscious. For a very long time, I’ve wanted “fat guy” calves. You know the type: thickness that looks like a football is attached to each leg, but because of the way we are built, it isn’t going to happen without hard work. It makes you pissed. What’s a tall athlete or genetically deficient person to do?

Here is my specialized routine devoted to increasing the girth and give you confidence to wear those camo shorts you bought at Old Navy. I’ve done this program for several months now with elite athletes and every day folks and they’ve all seen considerably measurable growth. If your calves bug you, do something about it and stick with this and you will see increased growth.

The first impression I want you to get used to is that calves should be hammered way more frequently than most parts, after all you walk on them. They’re built to endure punishment. Most people do them once or twice a week at best and they just grow. However, because of long femurs and the disadvantageous amount of fibers some folks possess, we need some increased frequency and varied rep ranges to work the vast array of fibers.

This program goes for 12 weeks, you’ll trash them four times a week, and I’ve structured it this way because the typical split is usually two on, one off, two on, two off. Each day of the week will target all three areas. The muscles we will concentrate on are the tibialis anterior (the front, long strip of muscle), the gastrocnemius (in the back, it’s what gives the calf the rounded shape) and the soleus (found on the inner part of the calf). We will be using different rep schemes, building up intensity as well as overall volume. I recommend doing the calf work first in all of your workouts, as they are usually shoved to the back and if you are physically taxed from a squat day or deadlift day, chances are you’re going to skip it. DON’T.

Lastly, don’t crank out half ass repetitions. I’ve seen this a million times and usually it’s done by guys who can add a shit-ton of weight and perform quarter rep movements with absolutely no stretch and/or hold. These same guys usually have pencils for calves. Don’t be that guy. Rep cadence timing is paramount.

Day 1
Standing Calf Raise 5×5 (read five sets of five reps).
Pick a weight that you can do four reps with good form and go to five. On the final set, use auto-regulation to see if you should move up in weight. If you can crank out more than five reps, go up 5-10 pounds on the next workout.
With your knees fully locked out, raise the weight with a 2 second count. Stretch to the top of the movement and hold at the top for one second. Lower the weight with control doing a 4 second count on each rep.

Seated Calf Raise 4×8-10
Shoot the weight up with a 1 second raise and briefly hold it for another second, raising down with 3 second count.

Toe Raises 2×20-30
Step onto the edge of a stepper and support yourself so that you don’t fall. Raise up as fast as you can, hold for 1 second and lower controllably but just as fast.

Day 2
Donkey Calf Raise on a Leg Press 5×12
Keep the front portion of your foot at the bottom area of the plate on a leg press with your knees fully locked out. Raise with a 3 second count, hold for 3 seconds and lower with a 6 second count.

Smith Machine Hack Squat and Calf Raise 3×12-15
With your legs out in front of you on a 3 inch block of wood or a stepper box, perform a set of hack squats, then after perform a calf raise with a cadence of 2 seconds up, 2 second hold at the top, 4 seconds on the lowered portion of the exercise.

Exercise Band Toe Pulls 3×20-30
With a latex exercise band, loop it around your socked barefoot, and anchor it to a heavy table or a barbell stand. Tug back with your toes, ensuring a full stretch and hold for 2 seconds, drawing back with control.

Day 3
Seated Calf Raise 4×12-20
Stretch at the bottom of the exercise, holding down for a two second pause. Ensure that the pause is profound, as this is paramount. Stretch to the top and do the same with the top portion of the exercise.

Standing Calf Raise 3×100
Pulse these as fast as you can BUT pause at the top for a brief second. Try to get to 100 reps without stopping. If you can do this, add some weight with a smith machine. Ensure a good stretch at both areas of the exercise.

Floor Toe Raises 2×50-100
Stand on the floor with your knees locked out. Lean back on the heel but keep the bodyweight in front of you. Pulse out as many repetitions with good form and don’t stop at the top. The burn you’ll in this exercise may induce vomiting.

Seated Calf Raise 3 sets to failure
Using a seated calf press, perform the same work as you did in the first exercise.

• I can’t mention the importance of performing the specialization first in the workout. You’ll move most weight and you’ll be fresh.
• Foam roll each area of the calf, both front and back for ten minutes after EVERY workout. This matters greatly!
• On the rest days, take care to foam roll religiously. Use a tennis ball to really dig into the areas, and eventually, a lacrosse ball.
• If you like to run or would like to start, start by performing the toe raise exercises lightly to warmup properly, as this can minimize shin splints.
• Take measurements of the widest part of the calf, and take photos. Each month, do the same. You’ll see growth. I saw an inch within a month.