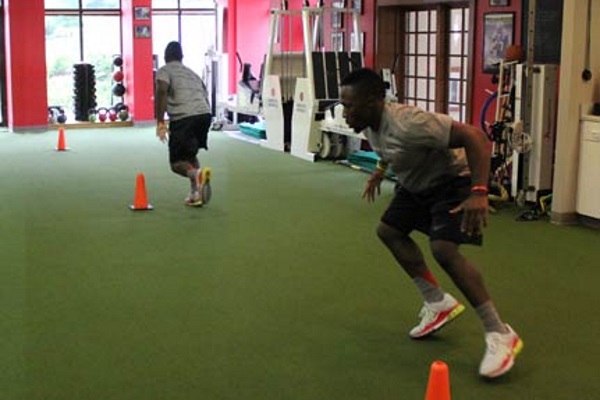 When it comes to jump, agility and strength training, many—if not most—athletes and coaches are missing half of the equation. Everyone wants to jump higher, sprint faster, hit harder. That’s the stock answer from players, coaches and parents. I hear it time and time again.

However, the key to outstanding athletic performance may be to focus on just the opposite.

Look at the other half of all those actions. Take jumping. The second half of a jump is the landing, which is when the muscles work to slow the body. If you are sprinting fast, there is a good chance you will need to stop rapidly and/or change direction. When hitting a volleyball or throwing, you have to slow the movement of your arm as you follow through. All of these actions require your muscles to act eccentrically.

Most sporting actions have both a concentric and eccentric component. The two muscle actions are quite different in the demands they place on the physical structures of the body and the motor control of those muscles by the brain.

The good news is that you can use eccentrics to get an edge.

Fast and Furious
We can use the analogy of racing a car. Imagine you will be racing on a speedway oval. If I ask you what you want to improve on your car, you will probably answer something like “a more powerful engine, better steering and handling, or improved tires.”

It makes sense. And it’s similar to speed on the track for a sprinter. Getting around the track as fast as possible is the goal.

Now let’s take the same analogy, but make it like a scene from The Fast and Furious. You’re racing around corners, dodging things and changing directions on the fly. Would you go out there without brakes?

If your brakes are weak, you won’t push your speed. You won’t be able to take sharp corners or change directions. You must have great brakes in order to fully use your speed in that environment.

Think of a Bicep Curl. Your arm is hanging at your side and you’re holding a dumbbell in your hand. When you contract your muscle and pull it up, you are making a “concentric” contraction. The muscle is shortening in length and performing “positive” work. The second half of the Curl is the eccentric part, when you lower the weight. Your muscles still contract, or else the weight and your arm would plummet down.

Eccentric actions have some drawbacks. They cause muscle soreness. If you’ve ever done a workout different from the one you’re used to, you know what I’m talking about. Soreness for a day or two afterwards was likely caused by the eccentric action of the exercises.

Eccentric actions can disrupt muscle fibers on a microscopic scale. They have greater potential to create delayed muscle soreness in the initial stages. Nobody really loves that intense sore muscle feeling.

However, we also know that after the initial soreness and damage, the muscles adapt to give us a protective effect against future damage for an extended time. That’s a good thing for athletes.

Overuse injuries are another consequence of eccentric actions. Jumper’s knee, rotator cuff tendonitis and shin splints all fall into this category. The common thread is the repetitive nature of eccentric stress on the muscles. If your muscles aren’t up to the task eccentrically, there is a good chance you’ll end up hurt.

Benefits of eccentric training
So, if all these injuries can occur during eccentric motions, why risk doing them? Because they are exactly what’s required of an athlete’s body. The key is to safely, and progressively prepare your muscles for eccentric stresses. Problems occur when an athlete pushes his or her body without having prepared it properly to handle eccentric actions.

From both an applied training and sports science perspective, here’s what we know:

All in all, that’s a lot of good reasons for an athlete.

Applied eccentric training
I advocate purposely emphasizing eccentric actions in your training. I believe in starting your jump, speed and agility training by focusing on eccentrics. This isn’t just for young athletes; I do the same for elite athletes. Professionals and Olympic medalists start here, as well as kids.

Let’s take the example of jumping. Before I emphasize jump height, I emphasize landing properly. Landing from a vertical jump can generate impact forces 2 to 6 times your body weight. Imagine an athlete landing on one leg after taking a big swing. That’s a lot of force. I believe we should be teaching athletes how to control the large eccentric force of landing by working on their eccentric strength and motor control.

We start with Drop Squats and Drop Lunges, where the emphasis is on lowering with good alignment and posture and under control. We may do Hurdle Jumps but emphasize soft, quiet landings over jump height. One of the easiest parts of coaching this is to use your ears. If the landing sounds loud, the impact forces are too high. Keep it quiet!

This doesn’t mean we don’t do jump training. What it means is we implement eccentric landing-focused drills first and progress to higher impact jump drills later. It also means we keep eccentric landing drills in the program at all times.

The same applies for agility.

If the athletes want to be more agile and have faster change of direction, I place a big emphasis on eccentric, absorbing actions first. There are many ways to do this. A simple example is by adding an eccentric component to agility ladder drills.

Instead of working solely on foot quickness, on every second or third step, athletes do the same motion but focus on lowering the level and holding it for a moment. Take a Split-Leg Shuffle where your feet split out to the sides and back into every box. On every third step, as both your feet move outside, you lower into a squat position, keeping good alignment and posture.

If we don’t have competition for at least four days, we might implement some eccentric overload in the weight room. This can be done by using the 2-1 method. For example, on the Leg Press you use two legs to raise a heavy weight, but lower it very slowly with only one leg. This particular drill has proven to be invaluable for dealing with knee tendonitis.

Athletes use eccentric training for an edge
Bottom line: eccentric muscle actions, slow and fast, should be an integral part of training for most sports. The purpose of training is to prepare the body for the demands of sport, so you’d better be performing some eccentric-focused training. If you do, you’ll get better performance results over the long run.