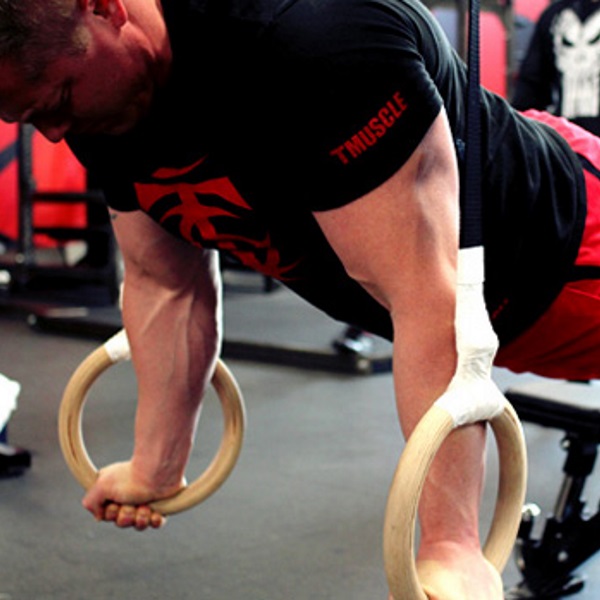 Does a Big Bench Build a Big Chest?
So you can bench 310.27 pounds? Great. But if your chest resembles that of a 17-year old boy rather than the square development of a grown-up, grinding away on the bench press isn’t doing much good. The bench isn’t bad or ineffective; it just isn’t the best exercise for maximizing muscle tension – especially if you lack an excellent mind-muscle connection. And that tension is what’s needed for growth.

The Conflict of Interest
Another issue with using the bench press as a primary means of building the chest is that most lifters have a conflict of interest with the exercise, especially men. We’ve been fed the idea that our bench is a barometer of our worth as lifters, maybe even our masculinity. The heavier yours is the more of a man you are. Supposedly. This makes it difficult to do the exercise in a way that actually helps build a developed chest.

Ironically, many people are more concerned about a bigger bench than bigger muscles, and they’re not even powerlifters. So rather than using ideal bench pressing form, most guys use as much weight as possible with crap form that does little to create the kind of tension necessary to build pecs. And adding more benching volume to your schedule won’t ameliorate the bastardized version you do that combines a bouncing of the bar, back arching, and extra help from your spotter even though, “It’s all you, bro.”

So what’s the answer to building the chest? Ditch the bench presses for a while and start using exercises that are more efficient at creating maximum tension.

Enter Suspension Training
Advanced bodyweight exercises like suspended flyes and push-ups require a level of muscular tension that can’t be matched by the bench press. Suspended exercises feel completely different than anything you’ll ever do with dumbbells or a barbell.

From a mechanical standpoint, suspended exercises are superior to barbell pressing because there’s more freedom of motion. The main function of the pecs is to bring the arms inward towards the midline of the body. The fixed range of motion required by a barbell bench press limits your ability to maximally work the pecs.

With suspended exercises there’s more freedom of motion. Instead of keeping the arms in a fixed position, you have the ability to bring the arms inward, placing your body in a prime mechanical position to maximally recruit the pectoral muscles.

Now, you may be thinking that dumbbells and cables also allow similar freedom of motion. True, but the fear of falling on your face creates a whole lot more tension in your muscles that can’t be matched by dumbbells and cables. Just the act of being suspended – and the threat of face-planting – forces you to create a high level of muscular tension.

The thing about suspended exercises is that ego is rarely an issue because you have to check that from the start. Most lifters will be thrilled that they’re able to complete a few reps without falling, making it more likely that focus will remain on proper form and maximizing muscle contraction and less on trying to determine how much weight you can brag about.

Two Suspension Exercises For Better Pecs
Bodybuilders from the golden era, like Larry Scott, used suspended exercises, and those guys had a combination of size and definition in their chests that’s rarely seen in our bench-press obsessed culture today.

Here are two exercises to try out.

Working Suspension Into Your Training
Using suspended flyes or push-ups in place of bench presses isn’t always as simple as a one-to-one replacement, unless you’re an advanced lifter and have experience with suspended exercises. So it’s important to understand how these should be applied to your workout. Here are two options.

For advanced lifters
Replace traditional exercises with the suspended alternative. If you’ve never tried suspended push-ups or flyes before, you’ll be surprised at how difficult they are. Don’t let your ego put you in a position where you might get injured. If you’ve never done this type of training before – regardless of how much you can bench – start by using the beginner or intermediate option.

After you’ve mastered the basic movements and have some experience in the suspended position, you can move towards replacing your barbell and dumbbell pressing with suspended exercises. Do suspended push-ups in place of bench press variations, dumbbell, barbell, etc. Do suspended flyes in place of dumbbell flyes, machine flyes, and cable crossovers.

Equipment
There are a number of different options including gymnastics rings, TRX suspension trainers, and Blast Straps, but if you have a choice I recommend rings or Blast Straps.

Rings and Blast Straps have separate straps for each handle, allowing you to adjust the length of the straps, which makes for more difficult progressions and general variations of the movements.

Plus, with the TRX, most people get annoyed by the rubbing/bruising of your arms that occurs because both straps are connected. So if you have the choice, go with rings. Otherwise, just work with what you’ve got.

Don’t Stop Doing Bench Presses for Good
Obviously. But if you’ve been hyper-focused on bench presses and aren’t seeing the results you want, switch things up with suspended exercises for a while. And if your bench press routine has grown stale, the challenge of mastering something new may be the kick in the ass you need to get you excited about training again.