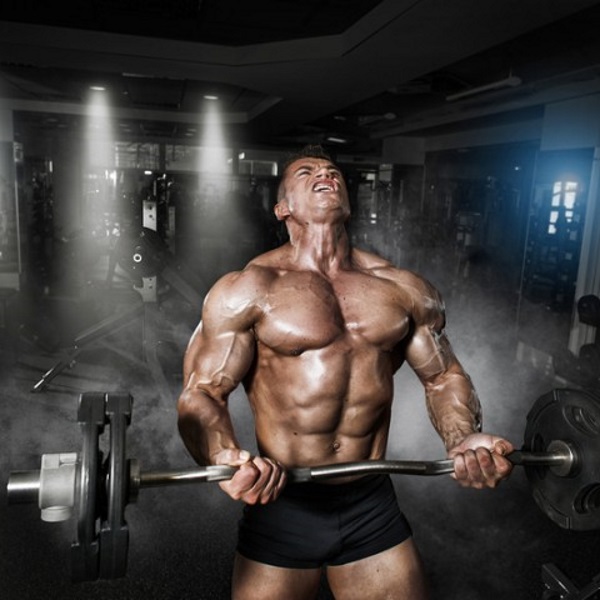 It is not difficult to understand why people correlate a good looking physique with being healthy. The day to day actions which serve to make a person healthy, such as eating an appropriate amount as well as variety of clean food, exercising regularly, and getting proper rest, do have a positive effect on one’s appearance, after all. The same can be said about physical performance with regards to these healthy habits. However, at a certain level of physical development or performance, these habits begin to mold into a much different image. At this elevated level, these habits start to become extreme in nature and often times harmful to the athletes health. One’s lifestyle quickly becomes more focused around performance, or in the case of bodybuilding, muscle growth, and less concerned with health.

In sports such as football and basketball, the general public seems to realize and respect this fact. In bodybuilding, this could not be further from the truth. People love to question whether or not these 270 pound men sporting sub six percent body fat levels are healthy, as if one of the tasks within the sport is to be as healthy as possible. Does anyone ask if Lebron James is healthy when he elevates from twelve feet out and dunks over two defenders? Does anyone ask if Adrian Peterson is healthy as he reflects off of the defense as if they were magnets pointed in the wrong direction? Of course not. They are competitive athletes, not public examples of perfect health. Bodybuilders are no different. They do not body-build to be healthy anymore than Lebron plays basketball to be healthy. They body build to be as big, lean, and symmetrical as possible, period.

Attractiveness is another extensively annoying topic that the general public loves to bring into play with regards to bodybuilding. If I had a dollar for every time I was reading a muscle magazine in a public place and a random person said “That is not even attractive!” or “How is that supposed to be attractive?” I could retire today. Again, do people watch Tiger Woods hit a 320 yard tee shot down the middle of an impossibly tight fairway and then discuss whether or not it or he was attractive? Do you watch Usain Bolt run 100 meters in just over nine seconds and say “That is not attractive”. Absolutely not, that would be absurd. Bodybuilders are not attempting to be attractive, those people are called models, not bodybuilders. They are attempting to be the best bodybuilder they can be and whether or not somebody thinks that is attractive is as irrelevant as the physical appearance of the physiques in the bikini division in regards to placings.

General health, with respect to different sports, will vary substantially. In most cases, the detrimental effects a sport has on health will come in the form of injuries, death by accidents, or extreme body mass. In bodybuilding, it has less to do with these more common concerns and more about drugs and diet. Bodybuilders have mastered the art of performance enhancing drugs like no other demographic of people. Diet also has a large effect on a bodybuilders health, simply due to the massive quantities of food a bodybuilder must consume to fully maximize his level of muscularity. Obviously, dietary habits are far less interesting than drug protocols, causing them to take a permanent back seat to drugs in discussions about the health of bodybuilders.

People must first fully understand that genetics play a colossal role in how a specific diet and especially drug regimen, will negatively impact an athlete’s health. Some bodies simply have a harder time dealing with the physiological changes that performance drugs illicit. This is in some ways related to the more extreme example that some people can start smoking when they are thirteen years old and live to be ninety, while others die of smoking complications at forty-two. Athletes in all sports should be honest with themselves and not apply tactics that will seriously impact their health, regardless of what their opponents and/or past champions have gotten away with. Bodybuilding is based as heavily on genetics as just about any other sport. This can fast become a dangerous fact to those with sub par genetics who are trying to make their way to the top of the sport. Without proper genetic gifts, the options of how to improve at an equally drastic rate as your more physically blessed opponents are limited to more or better food, more or harder training, and most hazardous of all, more drugs. When analyzing the recent deaths we have seen in our industry, one comes to the realization that the true genetic freaks are rarely the ones who have untimely deaths. The men who end up getting severe complications are generally men with less than ideal genetics, who attempt to compensate by taking different aspects of our sport to the extreme. Moral of the story being, if you need to take 8 grams of anabolics per week to become a professional bodybuilder, do yourself a favor and find a new “profession”.

On a brighter note, bodybuilding in general, minus the drugs and often times total body mass, is about as healthy a lifestyle as one could wish to have. Bodybuilding includes a relatively healthy diet and high amounts of physical activity at a bare minimum. However, paying close attention to bodybuilders at high levels reveals that many of them not only eat healthy, but eat like saints, counting every single gram ingested and making sure that as much of their food is organic as possible. To compliment this anal retentive diet, the majority of bodybuilders also perform cardiovascular work year round. There are however a demographic of bodybuilders who, due to the use of certain drugs and or having a very fast metabolism, will partake in copious amounts of junk food in the off-season, because they can “get away with it.” Fortunately, said demographic is the overwhelming minority in the bodybuilding world.

It would be inappropriate to say that these healthy habits completely offset the unhealthy tendencies of bodybuilders, but it would be even more ridiculous to think they do not counter them at all. This begs the question of whether it makes any sense for an “average” person who works a desk job while eating Doritos all day to ridicule a bodybuilder for being unhealthy, as the bodybuilder slaves away on the treadmill only to go home and eat wild caught salmon with organic broccoli. It may be of great interest to conduct some sort of study to determine the average life expectancy of IFBB professional bodybuilders, and compare that number to the general public’s life expectancy. The numbers may be closer than one would think. When a person finds him or herself questioning whether or not a massive, shredded bodybuilder is healthy, it may be of use to analyze one’s own habits, leave health guidelines to health professionals, and leave being huge and shredded to bodybuilders.